What are those spots in my fish?

During the fishing season, Michigan State University Extension and Michigan Sea Grant receive numerous calls from sport fishers who discover unwelcomed spots in the fish they plan on consuming. There are two different types of parasitic trematodes that cause black spot and yellow grub in fish.

The parasite that causes black spot in fish is detected as slightly raised pigmented cysts from the skin or fins. Fish that are affected by this parasite include the sunfishes such as bass, yellow perch, 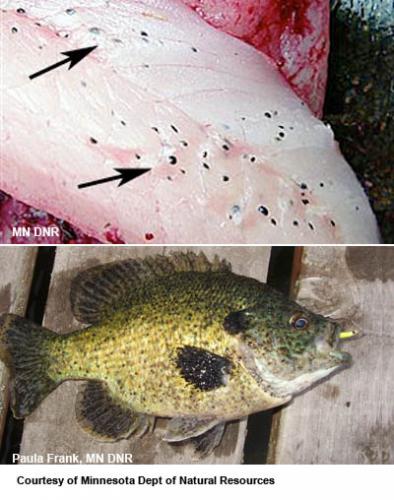 northern pike, and minnows. The black pigmented cysts are larval trematodes that mature in kingfisher birds. When a kingfisher consumes a fish with the larval trematodes, they mature in the throat of the bird, and then their eggs wash into the water from the bird’s mouth when feeding. Once in the water, the eggs hatch into the first larval stage and swim until they find a snail to infest. If they do not find a snail, they will die in several hours. Once in the snail, they go through several developmental stages, multiply a thousand fold, and leave the snail in a free-swimming stage in search of fish. If they do not find a fish within a few hours, they will die. When the free-swimming stage finds a fish, they burrow through the skin and encyst. Fish may be heavily infested with black spot, but the parasites usually do little damage and, in most cases, do not affect growth or the survival of the infested fish. 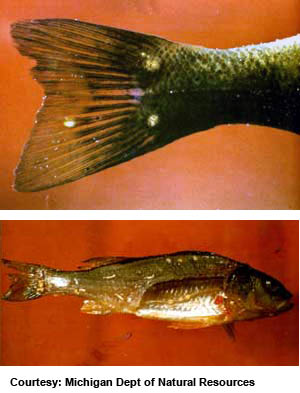 Yellow grub is found in many freshwater fish and it appears just under the skin or in the flesh. The grub is the larval stage of the parasite that must be eaten by fish-eating birds, such as herons and bitterns, to develop and follows the same life cycle as described for black spot. Yellow grubs can live for several years in the fish, allowing for heavy infestations to develop. Normally, yellow grub does not affect the fish unless it is heavily infested.

Even though both black spot and the yellow grub in fish make them look undesirable to eat, cooking destroys the parasites and the flavor of the fish is not altered. And, these parasites are incapable of infecting humans.