Why so few monarchs this season?

Monarch populations appear to be down this year in Michigan. Here’s why and what you can do to help.

The monarch butterfly (Danaus plexippus) is one of the most recognizable insects in Michigan, and yet prior to mid-July most observers have seen few monarchs so far in 2016. What’s the reason behind the lower numbers and what can you do about it?

Michigan’s monarch butterflies are part of the eastern migratory population, which overwinters in central Mexico. Each fall, millions of adult monarchs begin the return trip from their birthplaces as far north as southern Canada. Collectively, they find their way to just a handful of scattered locations in the states of Mexico and Michoacan where they gather in huge, overwintering clusters in select fir (Oyamel) forests. The large masses of butterflies that coat the tree branches are protected by both their large numbers and the forest canopy, which insulates them from cold temperatures. In March, the butterflies become active again, move to lower elevations, and eventually begin migrating into the southern United States where they lay eggs on milkweeds. The adults produced from these eggs are the butterflies that then migrate into Michigan in late May-June.

The overwintering population of monarchs in Mexico has been in decline for several decades due to a variety of reasons including reduced abundance of milkweed in the summer breeding areas, climate change, illegal logging of the fir forests, and increased prevalence of diseases and parasites. Annual monitoring of overwintering monarch populations show recent populations (2004-16) have been reduced by 44 percent from the long-term average (1994-2016). Because individual butterflies are too difficult to count in the dense clusters on the trees, populations are estimated by the physical area covered by the aggregations. In the winter of 2015-16, it was estimated that monarch aggregations covered approximately about 10 acres of forest spread across nine sites.

During the second week of March 2016, just as the butterflies began to move out of the overwintering sites, a severe winter storm disturbed the monarch butterfly sanctuaries in southern Mexico. Heavy winds downed many trees and shrubs in the areas where the monarchs were hibernating. The storm also brought rain, hail and snow, which killed significant numbers of butterflies. The wet conditions, below freezing temperatures and strong winds made for the perfect storm. The butterflies fell from the tree branches to the ground and froze to death. While some percentage of the adult population (perhaps less than 10 percent) had already migrated to the U.S., the bulk of butterflies experienced the storm, and losses were estimated at 50 to 70 percent. Continuing cool weather also delayed the surviving adults in migrating north. 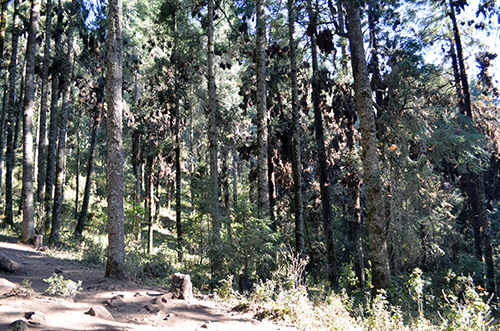 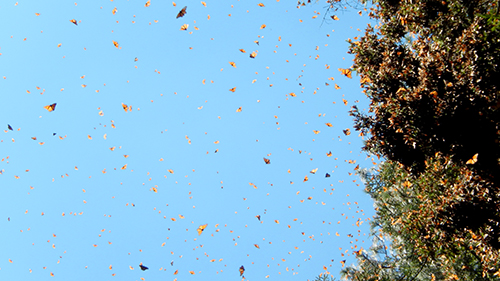 The impact of these conditions is that smaller populations were observed in the southern United States, and fewer adults arrived to lay eggs in Michigan. Seasoned observers reported seeing very few adults and almost no eggs or larvae of this first generation to arrive in Michigan. However, monarchs are resilient, and observations of new adults in mid-late July are increasing.

Monarch experts Chip Taylor of Monarch Watch and Karen Oberhauser of University of Minnesota confirm populations are low throughout the Midwest this year and suggest that continued work to expand milkweed habitat in the Midwest is needed. While it’s a bit late to plant milkweeds now, you can collect milkweed seeds this summer and fall and start planning your own monarch habitats for the future. For more information, see the additional resources below.

Michigan State University (MSU) scientists and educators are actively working with state and federal agencies to better understand and help the monarch. Doug Landis and his doctoral student Andrew Myers received funding from Project GREEEN and the MSU Department of Entomology to study patterns of monarch egglaying and survival in different habitats where milkweeds occur. This information will help people improve their success in supporting monarchs with milkweed plantings. David Mota-Sanchez is MSU’s representative to a North Central regional rapid-response committee working on monarch conservation (NC507: Monarch butterfly conservation). His work will increase understanding of migrations and the sanctuaries and how to effectively support those. In addition, he is performing a study of monarch butterfly mortality caused by the past winter storm in Mexico. Duke Elsner is MSU Extension’s lead monarch educator, and also keeps a database on all Michigan butterfly species distribution records. Email Elsner at elsner@msu.edu for help with identifying butterflies and information about their life histories.