If you have a significant Asian population in your service area, think about starting to produce winter melons to meet their culinary demands.

Winter melon or Chinese wax gourd (Benincasa hispida) is used extensively in Southeast Asian cuisine. It is used in soups and stir fries of various kinds from India through China. It can also be stored at room temperature for several months, hence the name “winter melon.” Although in a different genus, its growing requirements are similar to watermelon, a crop commonly grown in Michigan.

For this reason, eight varieties were planted at the Southwest Michigan Research and Extension Center in Benton Harbor, Michigan, in 2016 (see table) to determine their commercial potential. The eight varieties had a range of size, shape and maturity (see table and photos 1-2). 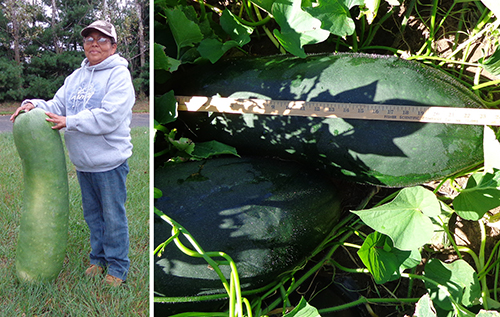 Having little experience in producing winter melons, it is difficult to determine maturity. As fruit matures, it generally develops a white, wax coating that easily rubs off onto hands and clothes. The fruit also have stiff hairs that irritate the skin, so it is best to handle them with gloves. Southern Dark Skin does not produce the wax, but does have the hairs. Large Oblong matured first, not only developing the waxy coating earlier but the plants also died, exposing fruit to the sun and potential sunburn (Photo 3). They were harvested in early September. Other selections were harvested mid-September through October. Harvest could possibly have been done earlier, but was delayed due to lack of experience with the fruit. 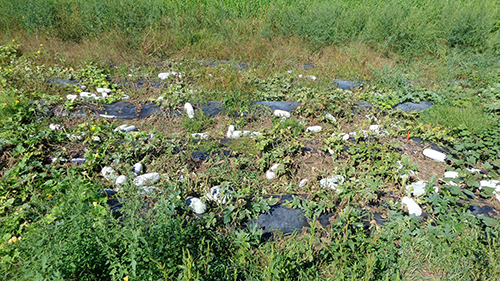 Hybrid Wonder Wax had extremely showy flowers (Photo 4) that were readily visible above the leaf canopy. The other entries had their flowers down under the leaf canopy. The exposed flowers may aid in attracting pollinators and increasing fruit set, but other entries did not seem to suffer decreased fruit set. Long Giant had a low fruit set, but is not well adapted to southwest Michigan anyway since it requires 150 or more days to maturity. 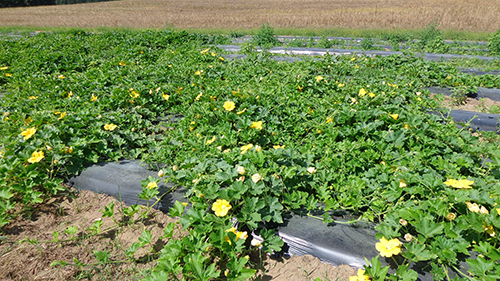 Photo 4. Hybrid Wonder Wax with its showy flowers above the leaf canopy.

An effort was made at marketing the winter melons through farmer’s markets and Chinese restaurants. Our experience found shape was not a concern, but size was. Most buyers wanted large fruit—15 pounds or higher, but they would take smaller melons down to 10 pounds. Melons were sold either by the melon or by the pound. Most melons of adequate size sold for either $4 or $5 a melon or $0.30 a pound.

Of the eight varieties evaluated, Large Round was the best performer in terms of number of fruit and fruit size. Other entries produced more fruit but it was smaller, which was not as desirable for buyers. Hybrid Small Round not only had small fruit, but also had fairly thin flesh. Of the two large fruit, Southern Dark Skin has more potential than Long Giant due to higher fruit set and shorter maturity time.

If you are a direct marketer looking for another crop to grow, Michigan State University Extension suggests winter melons certainly deserve your attention, especially if you have a significant Asian population.