FSP in Mali compared adoption and intensity of fertilizer use as well as productivity between men and women growers of sorghum within the same households. An AgriLinks post, August 31, 2017 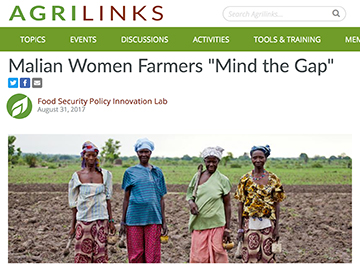 Posted on AgriLinks, August 31, 2017
The “gender gap” in crop productivity of African agriculture has raised policy concerns for decades. Since African women play a pivotal role in agriculture and family food security, this gap entails high social and economic costs.

A recent study from the Feed the Future Innovation Lab for Food Security Policy in Mali compared adoption and intensity of fertilizer use as well as productivity between men and women growers of sorghum within the same households.[1]

Dryland cereals in this region are typically produced by extended family members who are vertically (i.e., unmarried sons, married sons and their families) or horizontally (i.e., brothers, multiple wives) related to the head of the family farm enterprise. The head is usually an elder patriarch, or a work leader he designates. The head guides the organization of production on large plots labored collectively with the goal of meeting the staple food needs of the extended family. Custodian of the family’s land use rights, he also allocates individual plots to household members who cultivate them privately to meet personal needs.

Sorghum is the major food staple and also a source of cash in the zone of study. In fact, this study shows that average fertilizer use rates (in nitrogen nutrient kg/ha) are higher on women’s small sorghum plots than on the more extensive sorghum plots managed by men. Once they had controlled for soil quality, other physical features of the plots, and the intrinsic and observed characteristics of households, researchers found no significant differences in the efficiency of fertilizer use on sorghum (additional kg of sorghum grain harvested per hectare for an additional nitrogen nutrient kg applied per hectare) between men and women. However, the sorghum productivity gap persists: sorghum kgs harvested per ha was considerably higher on men’s than on women’s fields. Why?

1. Differing objectives and differing strategies for managing production and soil fertility could explain the gap in part. The plots managed by male heads are dedicated entirely to the staple food needs for the extended family as a whole. These large fields receive the greatest share of the family’s resources. In recent years, with declining farm sizes and land degradation, it is harder to meet family needs on these fields alone. Traditionally, women have used their tiny fields to grow the legumes they add in stews to the starchy staple, also selling some of their harvest to meet their own personal needs and those of their children. More of them now grow sorghum because of higher prices and as a “food reserve.” Often, they continue to intercrop legumes. Thus, while per hectare sorghum harvests appear lower, women are also harvesting legumes (groundnuts, cowpea) on the same fields.
2. Nonetheless, discussions with farmers confirmed that access to key resources remains unequal. Given that fertilizers are provided by official programs to the head of the extended family only and that all area planted to maize is eligible ― but not all area planted to sorghum ― the existing fertilizer program tends to bypass women, younger household members and less commercialized food crops.[2] As it is, the allocation of any fertilizers received through official programs depends entirely on intra household negotiations between the head and other household members. As is the case elsewhere, women’s time is stretched between their own fields, their domestic responsibilities and the family fields managed by men. Further, not only labor, but also equipment, is allocated first to the larger fields managed by the head.[3]
Within these complex, extended family households, women and men manage their plots with different objectives and differential access to resources. Programs should be designed to enable individual family members, including not only women but also youth, to attain their farming potential. Such measures would result in an increase in food security for all.