Often confused for dandelions, hawkweed is now flowering in lawns.

Probably the most obvious difference between dandelions and yellow hawkweed is in the flower, according to Michigan State University Extension. Although there are still some dandelions flowering out there, generally dandelions flower earlier and only produce one flower per stalk. In contrast, yellow hawkweed produces several flowers per stalk and appears in patches instead of as a single plant due to its creeping nature with stolons and rhizomes. This may facilitate the mowing around hawkweed patches that I often see; it’d be tough to mow around each individual dandelion plant. 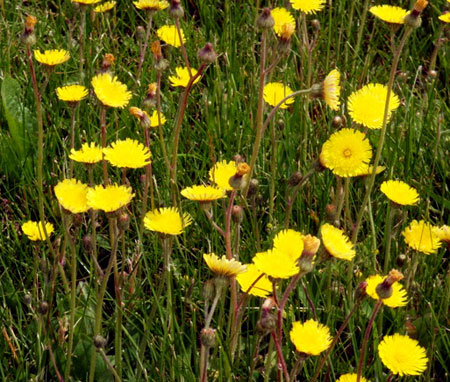 Yellow and orange hawkweed is a little easier to tell the difference. Hint: think color. Hawkweed’s presence is often an indication of poor growing conditions and is often found near roadsides, in boulevards or in country lawns that are rarely fertilized. Although common broadleaf herbicides will be effective in control, if you don’t improve the growing conditions, it’s likely to be back.