Damage by Zimmerman pine moth can be effectively controlled by a combination of monitoring, timely destruction of infested trees and appropriate use of insecticides.

Zimmerman pine moth is an insect that can be a real problem if you have Scotch and Austrian pine. This insect overwinters as a tiny caterpillar under bark scales or in crevices below a main lateral branch.

In the early, spring the larvae leaves its overwintering site and bores into the inner bark around the intersection of a branch and the main trunk. We have found that Zimmerman will also enter the tree at wounds and galls caused by gall rust. The larvae will tunnel under the bark in the phloem tissue for several weeks during the summer, causing large soft masses of pitch to flow from the tree. This tunneling often girdles the branch or stem which can kill branches, and the tree stems may break off above the wound. 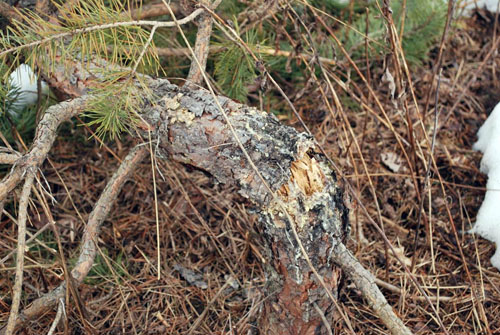 Feeding by Zimmerman can weaken the tree, causing it to break and fall over.

If you plan to use an insecticide to control this pest, the insecticide must be on the bark as the caterpillar bores in (25-100 GDD50), otherwise it will be well protected under the bark for the rest of its lifecycle. In addition to applying the insecticide early, it is also important to adequately cover the bark of the stem and large branches. If you are unable to get good coverage, spraying will not be effective!

We have found that trees attacked the previous year were more likely to be attacked again. This means you need to look for heavily infested, individual trees. Cut and destroy those trees by chipping or burning them as early in the season as possible. Removing the most attractive trees from the field may help reduce the damage to trees not previously injured. In addition, trees that are stressed from Zimmerman feeding are more prone to increased damage from Diplodia tip blight.