What is the Water Withdrawal Assessment Process?

It is an assessment of the ecological impacts of a proposed large quantity water withdrawal on nearby streams and rivers. As stated in Public Act 179 of 2008, “Large quantity withdrawal” means 1 or more cumulative total withdrawals of over 100,000 gallons of water per day average in any consecutive 30-day period that supply a common distribution system. The process was developed in 2006 by a statewide Groundwater Conservation Advisory Council1 and the Michigan Legislature. It is science-based and, as such, is subject to improvements as more data become available. It takes into consideration the relationships between groundwater withdrawals, nearby stream flow and fish populations. It determines the likelihood of a withdrawal causing a serious impact on a nearby stream or river and it provides guidance towards minimizing the impact. For a detailed explanation of the deliberations and development of the Water Withdrawal Assessment Process, please refer to the Council’s final report2 .

How does this process determine how much water is available?

The process first determines the level of flow necessary to protect stream and river ecosystems and the fishes that inhabit them. It then assesses the impact of proposed large quantity withdrawals. The process operates at two levels: an Internet-based, screening-level tool and/or a more detailed site review by Michigan Department of Environmental Quality (MDEQ) staff. If the estimated impact of a proposed water withdrawal is minimal, a person may register the use and proceed to develop it. Starting July 9, 2009, all proposed large quantity withdrawals must use the screening level tool (or complete a site specific review) before registering a use. The free screening level tool is available online at www.miwwat.org.

Do these new laws change my riparian rights?

No, the Riparian Doctrine of reasonable use is still the basis for Michigan water law. Every Michigan landowner has a qualified (not absolute) right to the reasonable use of the water adjacent to or under his or her property. A landowner may defend this right through the court system.

Impacts of groundwater wells on nearby river and stream flows

Previous (2006) Michigan water withdrawal legislation provided a rebuttable presumption3 that wells deeper than 150 feet or farther than onequarter mile from streams or rivers did not cause an adverse impact on the aquatic ecosystem. However, in practice, the impact of wells on nearby streams and rivers is more complex than these interim rules implied. Pumping rate and duration, well depth, aquifer characteristics and other landscape features determine the impact on nearby streams and rivers. The 2008 legislation addresses these concerns.

How will the Water Withdrawal Assessment Process help determine impacts?

Do groundwater aquifer characteristics and supplies differ across Michigan?

Yes. Groundwater may be stored in bedrock aquifers or in overlying “glacial drift” aquifers. Drift aquifers are composed primarily of sand and gravel deposits left by the glaciers. Both types of aquifers can vary greatly in actual depth and capacity to store and transmit water.

How are these aquifer variations reflected in the screening tool?

The geography of these aquifers has been mapped, but not in detail. Estimates of aquifer characteristics and depths were obtained from the Michigan Groundwater Inventory and Map Project, located at http://gwmap.rsgis.msu.edu.

One goal of the Water Withdrawal Assessment Process is to maintain current flow regimes for different types of streams and rivers across Michigan. An important element of the process is attention to summer low flows. The median stream flow for the summer low-flow month is called the index flow. This median value means that during the low-flow month, half the time stream flow is less than the index flow and half the time it is more. It represents the center of the range of natural low flows typically experienced by fish populations in that particular stream or river. Index flows are calculated for about 7,000 stream and river segments across Michigan and are incorporated into the screening tool as reference points for current flow conditions.

Why use the summer low-flow month as the index flow?

The main component of stream flow during the summer low-flow month is groundwater. Summer is the season of lower precipitation, higher evapotranspiration and less runoff directly to streams. Late summer is a naturally stressful time for fish populations, as streams and rivers are shallow and experience their highest temperatures and lowest dissolved oxygen levels. In short, the summer low-flow month is often the worst case habitat scenario for fish populations. It can be a limiting period for resident fish communities, as well as for other riverine animals and plants. Therefore, the index flow is a sensitive measure of possible effects of water withdrawals. In Michigan the summer low-flow month is almost always August or September.

There are 147 gaged stream segments in Michigan that have at least 10 years of record (although not always the most recent 10 years). However, there are 7,000 stream and river segments incorporated into the screening tool. To estimate flow for the ungaged stream and river segments, a statistical model using watershed characteristics such as geology, soils, drainage area, land cover and precipitation, has been built to reproduce the range of index flows observed across the selected 147 gaged stream segments. These same watershed characteristics have been mapped for the remaining ungaged segments and these data are fed into the statistical model to produce estimates of index flows for ungaged streamand river segments. Existing withdrawals are taken into account to the extent that they are reflected in the data from the 147 gaged streams.

Yes. A large quantity surface water withdrawal from a river or stream has greater potential for impact because it is a direct gallon-for-gallon reduction of the index flow. Pumping from a groundwater aquifer typically has less impact than pumping from surface water, depending on distance from the stream, depth of the well and aquifer characteristics.

Can the screening tool assess the impact of withdrawals on lakes and wetlands?

No, not directly. The screening tool assesses the late summer water budget for the entire area drained by each particular river segment, but it does not provide assessments for specific lakes and wetlands. One charge to the new Water Resources Conservation Advisory Council is to examine whether and how the definition of Adverse Resource Impact (defined below) should be modified to address potential impacts to inland lakes and other aquatic systems.

The term Adverse Resource Impact (ARI) is the maximum allowable reduction in index flow based on the impacts to a stream’s characteristic fish population. This standard applies to all Michigan streams and rivers, based on classification of habitat type. In other words, different types of streams and rivers can sustain different amounts of index flow reduction before an ARI occurs.

Why were fishes used as the environmental indicators of ARI in streams?

Stream and river ecosystems are made up of physical, chemical and biological components, some of which are suitable as indicators of stream health. Fishes are commonly used because they are high on the food web and thus considered integrators of habitat and food web qualities.

What is a characteristic fish population?

The species of fish that are expected to occur in better than average numbers in a certain habitat type of stream or river. To determine characteristic fish populations, the screening tool uses Michigan Department of Natural Resources (MDNR) fish survey data collected at more than 1,700 survey sites across Michigan from 1980 to 2005. These data were summarized to provide a statistical description of each species’ habitat needs in terms of stream catchment area, index flow and summer water temperatures.

How do I find the habitat type of a stream or river?

Michigan’s streams and rivers have been classified into 11 habitat types according to watershed size, characteristic fish populations and summer mean water temperature. Using this system, each of the 7,000 stream and river segments have been classified and mapped (Figure 1). Information on a specific stream or river habitat type may be found within the screening tool on the Water Withdrawal Assessment Process web site. 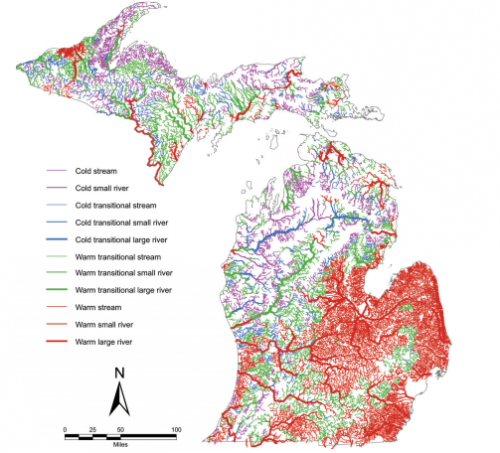 Are characteristic fish populations to be expected, even in a channelized county drain or a man-made irrigation ditch?

Are these water bodies included in the assessment process?

Yes. Natural streams, modified streams and man-made ditches are all included. Some Michigan streams and rivers have naturally small index flows. These water bodies may not appear to flow during the driest periods of the year, but are still considered to be permanently flowing.

How do I find the characteristic fish population for a watershed of interest?

Information on the characteristic fishes that are common to each of the 11 habitat types may be found in the online screening tool. However, the actual fish populations in any one stream segment may vary.

What is a fish response curve and how is it used in the assessment process?

A fish response curve predicts the response of a characteristic fish population to decreasing index flows due to water withdrawals. Fish curves are generated using the statistical habitat information described above and are incorporated into the model. They are used in determining risk of creating an ARI due to a proposed water withdrawal. The tool uses 11 fish response curves – one for each of the 11 habitat types depicted in Figure 1.

The online assessment tool expresses risk of ARI with four zones — A through D. How do these zones relate to a proposed large quantity withdrawal?

All Michigan streams and rivers are classified by size and water temperature. Each stream type has different characteristic fish populations that respond differently to the loss of water. For each type, a maximum amount of water can be withdrawn before an ARI occurs. When using the online assessment tool, the risk of ARI is marked by Zones A through D. Zone A (green) has little risk of causing an adverse resource impact, while Zone D (red) means an adverse resource impact will occur. Zones B and C lie between these extremes, indicating increasing risk. The tool advises the user what zone his/her proposed withdrawal falls into and provides instruction on next steps.

Do these risk zones allow a percentage loss of fish populations?

Yes. Human water uses are balanced against aquatic ecosystem uses. However, the tool is designed to prevent substantial damage to the ecological integrity of Michigan’s streams and rivers and to increase awareness, caution, conservation practices and protection as the risk of ARI increases.

Where can I find more information about Michigan’s new Water Withdrawal Assessment Process?

More information may be found on the Michigan Department of Natural Resources Web page at www.michigan.gov/wrcac.

2 Final Report to the Michigan Legislature, in response to Public Act 148 of 2003 (February 2006) available on-line at www.michigan.gov/wrcac.

3 A rebuttable presumption, in this context, is defined as a legal assumption that can be contested by a preponderance of scientific evidence.

Smart Gardening for Shorelands: Soak Up the Rain with a Rain Garden