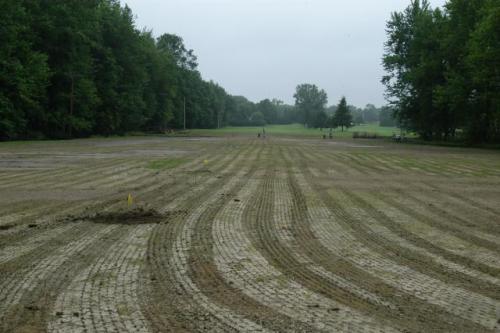 When it's dead; time to renovate.

Submersion duration relates closely to turf species submersion tolerance rankings. For example, if Poa annua is submerged for several weeks, the rankings suggest that its survival ability will probably be less than that of creeping bentgrass. As we discuss further, the complexity of predicting survival will become evident.

As submersion depth increases, the potential for injury increases. If the leaf tissue is above the water line - even just a little bit — the turf will probably survive. Have you ever observed creeping bentgrass floating on the edge and even growing out into a lake? That's a perfect example of turf surviving when partially submerged.

As flood waters recede, the turf may be yellow or brown. The discoloration is related to several factors, including the turf's loss of chlorophyll, loss of soil nitrogen through denitrification and leaching, and loss of the ability to take up nutrients due to a compromised root system. It doesn't take long once turf is submerged for soil oxygen levels to decline and root hairs to begin to die. As the root system becomes impaired, nutrient extraction and water uptake will be limited. Keep this in mind, once the water has receded — the turf may benefit from a light fertilizer application. To assess whether submersion has caused injury, extract several plants from the flooded area and cut a horizontal cross-section through the crowns. If a plant's crown is white and firm, it has survived. If the crown is brown and mushy, it's dead.

For areas flooded because of a stream or river overflowing a bank, the main problem associated with flooding is often the silt or soil deposition on the turf. Removing sediment can be difficult. Once soil conditions are dry enough, soil cultivation, whether by core aerification or slicing, will benefit the turf by breaking through deposited soil layers. Aeration or slicing will facilitate turf rooting and water infiltration.