Adaptation:Taking action to prepare for current and expected impacts of climate change.

Adaptive Capacity: The general ability of institutions, systems, and individuals to moderate the risks of climate change, or to realize benefits, through changes in their characteristics or behavior. Adaptive capacity can be an inherent property (e.g. natural ecosystems) or it could have been developed (e.g. community wildfire protection plan).

Agreement: The extent to which evidence is consistent in support of a vulnerability statement or rating (Figure 1). 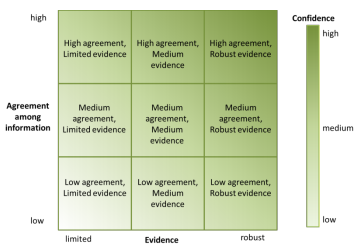 Alternate Ecological State: A change in ecological characteristics of a biological system, often triggered by invasive stresses of either native or exotic species, that leads to a different set of long-term ecological conditions. These states are usually less diverse, less productive, and generate fewer (or lower quality) ecological services and/or products for human consumption.

Asynchrony: When events that normally occur in a particular sequence, or together, no longer do so. For example, earlier spring flower break may come earlier than the emergence of insect pollinators, resulting in lowered plant fertilization rates.

Cascading Impacts: Multiple changes in composition, structure, and/or function of an ecological system (e.g. forest) triggered by a new element or combination of elements. Cascading impacts can lead to alternate ecological states.

Climate: The mean and variability atmospheric trends that persist for an extended period, typically decades or longer. Climate is different than weather, which is a short-term phenomenon.

Climate Change: A change in the state of the climate that can be identified (by using statistical tests) by changes in the mean and/or the variability of its properties over an extended period. Climate change can occur due to natural processes and to persistent anthropogenic change in the composition of the atmosphere or in land use.

CO2 Fertilization: The increase in plant uptake of carbon dioxide (CO2) through photosynthesis in response to higher concentrations of atmospheric CO2.

Confidence: A qualitative assessment of uncertainty as determined through evaluation of evidence and agreement. This definition is different than that which is commonly used.

Disturbance: Stresses and destructive agents (e.g. pests, pathogens, fire, storms, timber harvest, etc.) that cause changes in forest composition, structure, or function. Disturbance can be natural, human-caused, or a combination of both.

Driver: A natural or human-caused factor that determines the identity of an ecosystem (e.g. acidic peat soils for a black spruce swamp).

Error: A statistical measure that represents an estimate from a known quantity. The scientific definition is different than more common definitions.

Evidence: Research-based information, sometimes expert judgment, used to determine a level of confidence in a vulnerability statement or rating.

General Circulation Model (GCM): Numerical representation of the climate system based on the physical, chemical, and biological properties of its components, their interactions and feedback processes, and accounting for all or some of its known properties. GCMs are often tested on their ability to reproduce known historical data before making projections into the future.

Impact: The direct and indirect consequences of climate change on systems (natural and human), particularly those that would occur without adaptation. Impacts are a combination of exposure and sensitivity.

Impact Model: A model that projects potential impacts of climate change on a particular species or system (natural or human). Impact models should be used as tools to better understand the possible effects of climate change, not as concrete predictions of the future.

Novel Species Mix: New plant and animal associations, caused by stressors such as climate change, that do not normally occur.

Novel Successional Pathways: Changes in ecosystems, caused by stressors such as climate change, from one forest type to another forest type. These changes would be different from what might be expected under ordinary conditions.

Phenology: The study of the timing of natural events (e.g. dates that migrating birds return, flowering dates, ice on / ice off).

Risk: The degree to which a species or system (natural or human) is vulnerable to new conditions, such as climate change. The amount of risk will vary considerably based on a variety of factors. It is important to consider risk when weighing management actions for adaptation.

Response Diversity: The number of ways a species or system (natural or human) might change when a new set of conditions are introduced.

Projection: The potential change in a set of quantities, often computed with the help of a model. Projections differ from predictions in that they employ stated assumptions (that can be modified) about socio-economics, technology, industry trends, and other conditions.

Resilience: The ability of a species or system (natural or human) to withstand a given level of impacts or stressors and still return to a prior state. Resilience is related to adaptive capacity.

Sensitivity: The degree to which a species or system will experience an impact when exposed to a stressor. Combined with exposure to assess the potential impact. For example, fairskinned people have greater sensitivity to direct sunlight and are more likely to become sunburned than dark-skinned people.

Stressor: An agent, condition, change in condition, or other stimulus that causes stress to an organism or ecological system.

Uncertainty: The statistical expression of the degree to which a value is unknown. Uncertainty can result from inherent complexity, lack of information, or from disagreement about what is known or even knowable. It may have many types of sources, from quantifiable errors in the data to ambiguously defined concepts or terminology, or uncertain projections of human behavior. Uncertainly can be described using quantitative measure or by qualitative statements.

Vulnerability: A term to describe differences among species or systems (natural or human) in their response to climate change. A combination of exposure, sensitivity, and adaptive capacity. 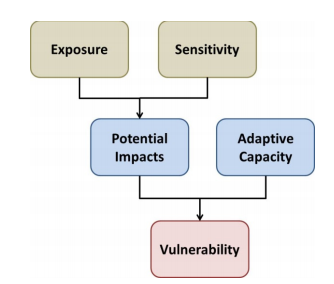 Weather: The state of the atmosphere at a given time and place, with respect to variables such as temperature, moisture, wind, and barometric pressure. Weather is not the same as climate.