We have all likely heard the saying “leaves of three, let it be” in reference to poison ivy.

This is a helpful starting point, but additional details and background are important for identification. Two different plant species in Michigan are referred to as poison ivy; both are members of the mostly tropical family that contains mangoes, cashews, and sumacs: Anacardiaceae. Eastern poison ivy (Toxicodendron radicans) is concentrated in the lower half of the Lower Peninsula (Figure 1) and often grows as a vine with aerial roots (Drife, 2015; Reznicek et al., 2011) (Figures 2 and 3). Western poison ivy (Toxicodendron rydbergii) can be found in the Upper Peninsula and the northern and western portions of the Lower Peninsula. Western poison ivy has an upright growth habit (Figures 4 and 5); it does not climb and does not have aerial roots. 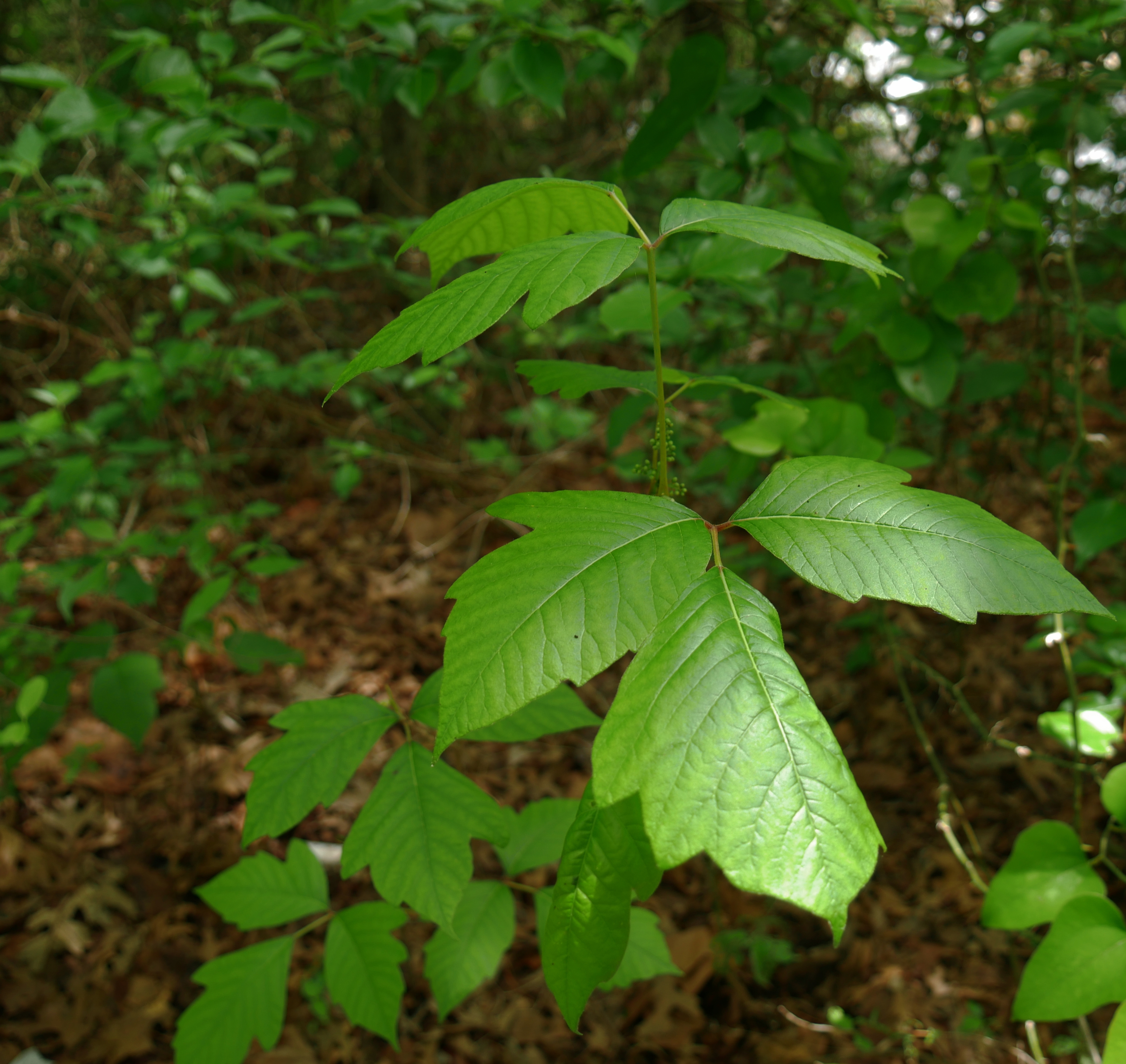 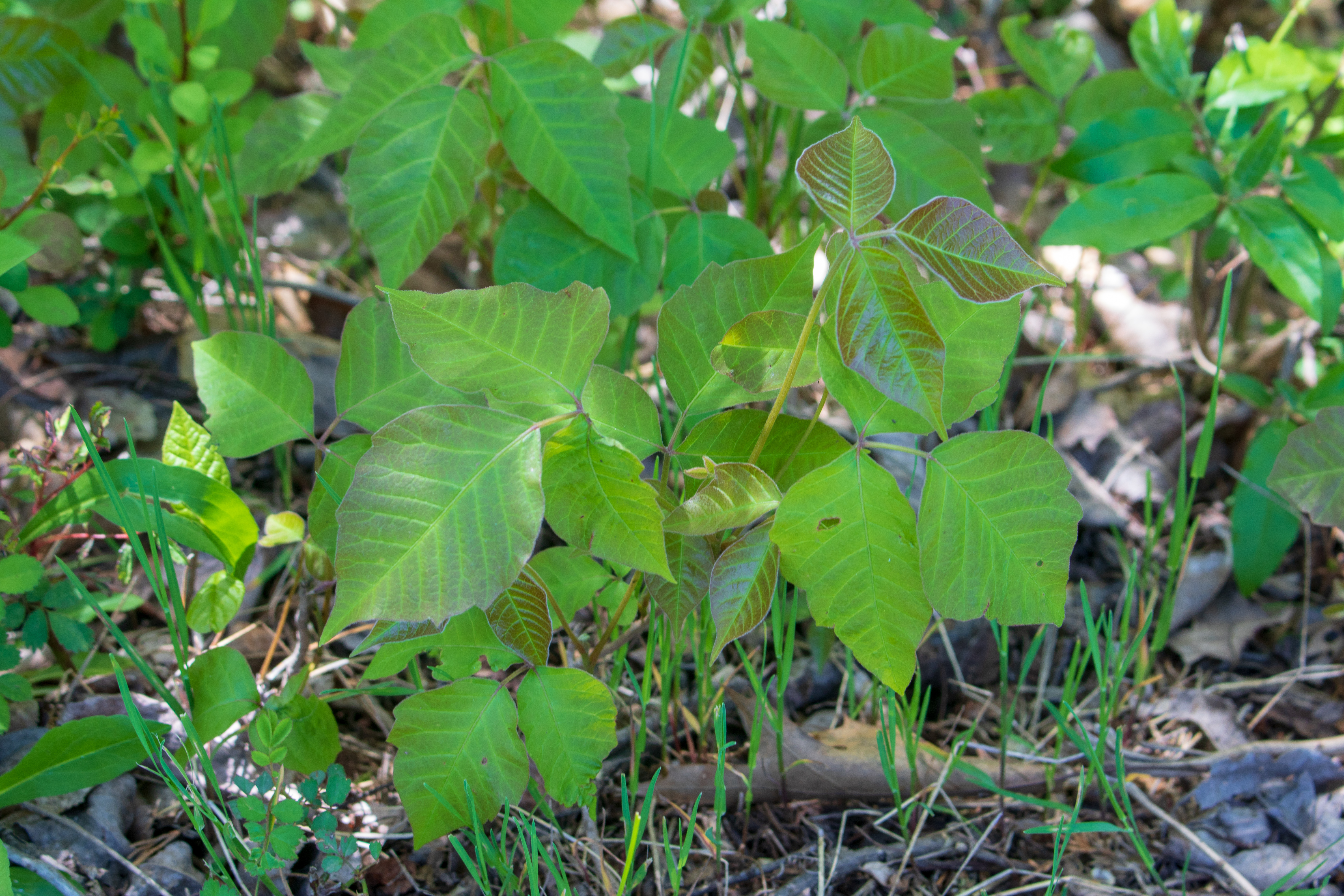 Figures 2 and 3 (first and second). Eastern poison ivy has a vining growth habit and aerial roots to secure it to trees and other objects. (Figure 3 photo by Angela Tenney) Figures 4 and 5 (third and forth). Western poison ivy has an upright growth habit with no aerial roots (Figure 4) and can often be seen as patches on the forest floor (Figure 5). (Figure 5 photo by Jennifer Yakey-Ault)

Besides their architecture, the other features of these two species are similar. Both are woody perennials native to Michigan. Both have compound leaves bearing three leaflets apiece (“leaves of three”), which are arranged alternately along the stem (Figure 6). Leaves are shiny and often dark green, though coloration can vary with growing conditions. Leaflet margins may be smooth, irregularly toothed, or lobed. On each leaf, the two lower leaflets have very short stalks (petioles) and often have “thumb-like” lobes at their bases (Figure 7), while the center leaflet sits on its own longer stalk. Leaves turn red in the fall (Figure 8). Both species frequently produce rhizomes or underground stems, which allows them to spread vegetatively. Mature individuals can also produce clusters of small yellow-green flowers with five petals. These flowers eventually turn into berries that are greyish to white. The berries contain the seeds of poison ivy and facilitate dispersal by birds and other wildlife. Animals such as birds and household pets are not sensitive to the allergen in poison ivy, unlike most humans (see the “Urushiol” section for more information). 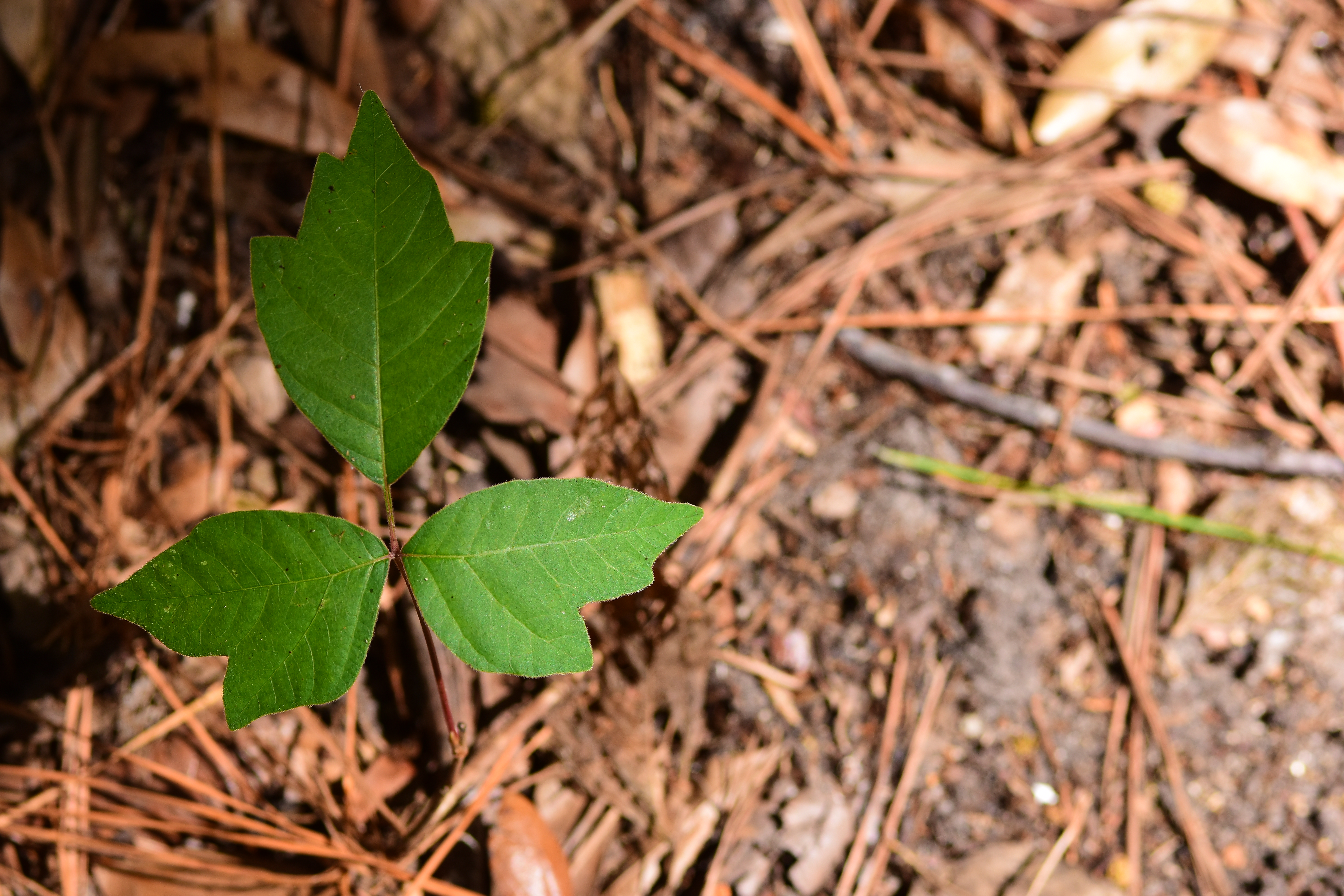 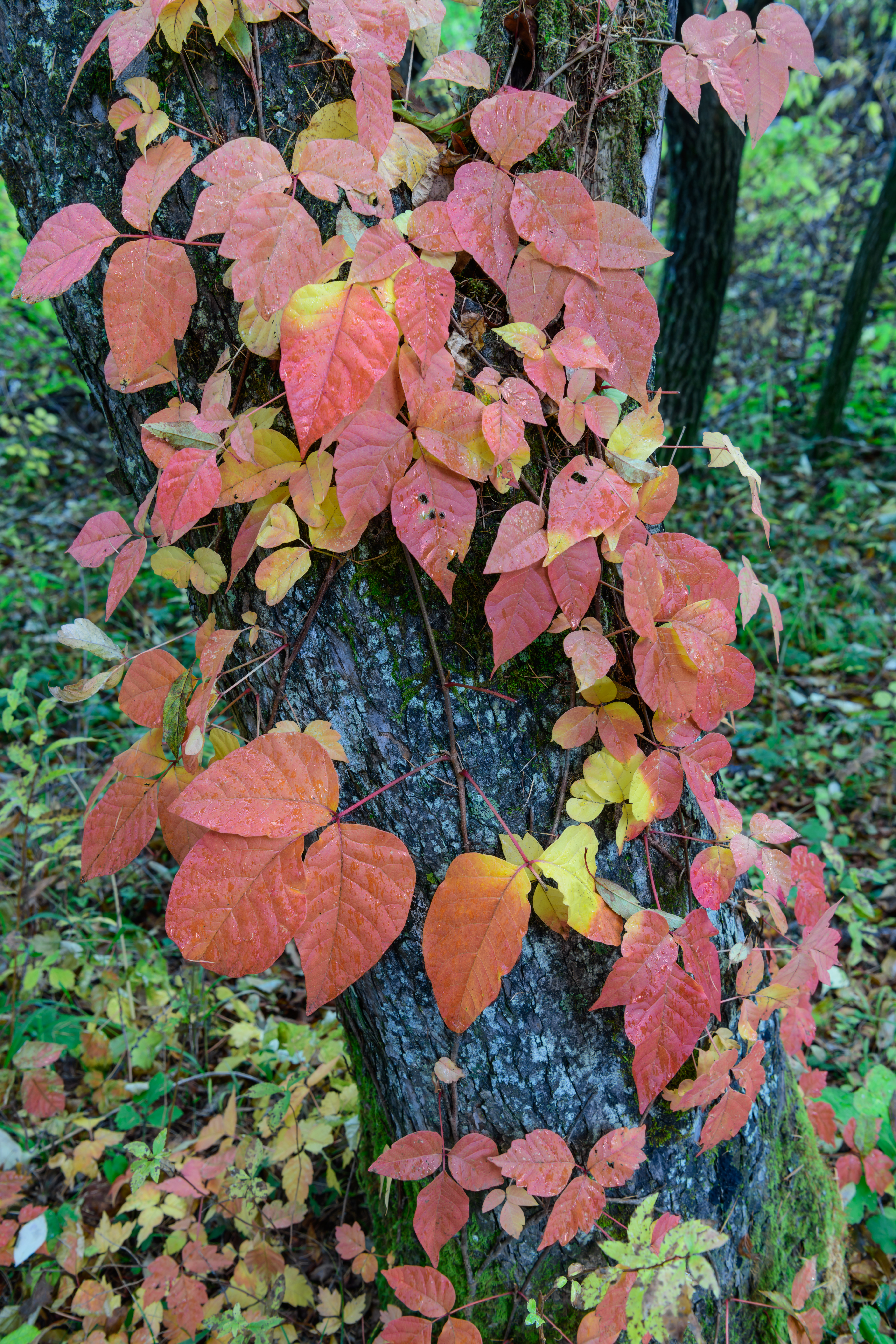 Figure 6 (first). The leaves of poison ivy are arranged alternately along the stem. Note that the margins on this plant are relatively smooth. Figure 7 (second). Some poison ivy plants have “thumb-like” appendages or lobes on the two smaller leaflets, like the specimen here, but sometimes the leaf margins may also be smooth or more toothed. Figure 8 (third). The leaves of both Western and Eastern poison ivy turn red in the fall.

Several plant species in Michigan are often confused with poison ivy. When reading the following descriptions, please note that poison ivy always has three leaflets and never more than that. It has alternate leaves and never opposite (Figure 9). It also does not have thorns or spines, nor do its leaves have scalloped or finely serrated margins.

Boxelder tree seedlings (Acer negundo) – Seedlings of boxelder trees can have compound “leaves of three” at early stages (Figure 10), but then go on to produce leaves with five leaflets (occasionally seven). At this early stage, boxelder seedlings can still be distinguished from poison ivy because their leaves are arranged oppositely, meaning two leaves or branches come from each node (Figure 11), compared to the alternate arrangement of leaves on poison ivy.

Virginia creeper and thicket creeper (Parthenocissus quinquefolia and P. inserta) – These are both woody vines that can be found throughout most of Michigan. They can be differentiated from poison ivy by their five leaflets (Figure 13); young leaves can have only three leaflets. Both climb trees and structures using tendrils, and the tendrils of Virginia creeper have distinctive adhesive disks (Figure 14), unlike poison ivy. Similar to poison ivy, leaves of both Virginia creeper and thicket creeper turn to red tones in the fall; however, berries are dark purple-black unlike the white berries of poison ivy.

American hogpeanut (Amphicarpaea bracteata) – This is an annual or a perennial plant with compound leaves consisting of three rounded leaflets with toothless margins (poison ivy usually has irregularly rounded lobes or broad teeth). The toothless leaflets are not shiny like poison ivy (Figure 15).

Grape species (Vitis spp.) – There are a few different species of grape that grow wild in Michigan. These species all have alternate leaves, woody stems, and tendrils used to climb. The bark of wild grape has a shaggy or shredded look to it (Figure 16). Leaves are simple, or singular, never compound like poison ivy (Figure 17). These leaves may be lobed or unlobed with serrated or smooth margins, depending on the species. The berries are dark when mature and smaller than commercial varieties of grapes.


Figure 16 (first). Grape species are known to have a shaggy appearance to their bark and no aerial roots, unlike poison ivy. (Photo by Angela Tenney) Figure 17 (second). There are several species of grape found throughout Michigan; all have single leaves (simple, not compound). Pictured here is riverbank grape (Vitis riparia). (Photo by Angela Tenney)

Urushiol is the substance responsible for skin irritation in many people. It is an oil found on all parts of the poison ivy plant (that is, leaves, roots, stems both green and woody, and berries). This oil can be transferred from the plant to skin, gloves, clothing, equipment, and animal fur. The oil does not break down rapidly, therefore, it can later be transferred from animals and objects to your skin. Allergic response to contact with urushiol can vary from person to person. Exposure can increase sensitivity over time. The symptoms of an allergic reaction to skin contact with urushiol from poison ivy can include rash, burning sensation, itching, and blistering. If you suspect that you came into contact with urushiol, wash the exposed areas of your skin immediately with soap and water or alcohol before the allergic reaction can occur. Removing the oil will prevent it from spreading to other parts of the body or to other people or objects. There are many over-the-counter topical creams to help alleviate the symptoms of poison ivy. Symptoms should dissipate in two to three weeks. In severe cases, seek medical attention as oral steroids or antibiotics may be required particularly if the initial irritation leads to a bacterial infection. The eyes and lungs can also be affected. If poison ivy is burned, urushiol can be inhaled and cause lung irritation. If you suspect that your eyes or lungs may be affected by exposure to urushiol from poison ivy, seek medical attention.

Eradication of poison ivy without the use of herbicides will require multiple efforts over time due to the extensive root and rhizome system. Careful physical removal of all above- and below-ground portions (taproot and rhizomes) of the weed will eventually deplete the remaining root system that cannot be reached. When removing the plants, take care to cover exposed skin. Wear waterproof gloves. Bag plant material and dispose of it with the trash. Never burn poison ivy as the allergen, urushiol, is volatile and can be inhaled. Do not mow poison ivy as airborne particles may reach uncovered skin or be inhaled. Wash all tools used in eradication efforts to remove any urushiol. Urushiol does not break down quickly and can remain on dead plant material, gloves, and tools for over a year. If you have a lot of poison ivy or it is hard to reach, consider hiring a certified professional to remove it.

The two most effective herbicide active ingredients for poison ivy control are triclopyr and glyphosate, though 2,4-D has also been shown to be effective. For examples of current products, contact Michigan State University (MSU) Plant & Pest Diagnostics (pestid@msu.edu) or your local MSU Extension office. Triclopyr and glyphosate are most effective when carefully applied as a concentrate to cut stumps (if large enough, drilling holes in the cut stump also aids in uptake). You can apply in any season, except early spring when sap flow may reduce movement to the below-ground tissues. Applying the herbicide as a concentrate to the cut stump(s) can minimize any off-target risks. Glyphosate is a nonselective herbicide and can kill or injure any nearby desirable plants if contacted, whereas triclopyr and 2,4-D are selective and will not kill grasses. Triclopyr is often more effective than glyphosate in controlling poison ivy; however, it can persist in the soil for up to 30 days or more depending on the environment and can therefore potentially injure sensitive species planted into the treated area within that time. Glyphosate does not pose a risk to re-planting once dry due to binding with clay and organic matter in the soil. Use caution with these products as they will kill or injure other plants with which they contact green foliage, green bark (non-mature), injured bark, or exposed roots. Triclopyr can also be absorbed through mature bark. Always read and follow the label when using any herbicide. Herbicides may require reapplication, depending on the size and establishment of the plants. If you are attempting to control a large population of poison ivy, consider hiring a certified professional. Remember that dead poison ivy plant tissue still contains urushiol, and therefore, take protective measures if removing it.

Other Documents in this Series