Fusarium dry rot is one of the most important diseases of potato, affecting tubers in storage and seed pieces after planting. Fusarium dry rot of seed tubers can reduce crop establishment by killing developing potato sprouts, and crop losses can be up to 25 percent more than 60 percent of tubers can be infected in storage. All the commonly grown potato cultivars in North America are susceptible than others, and several breeding lines have been reported to have a higher degree of resistance to dry rot.

The first symptoms of Fusarium dry rot are usually dark depressions on the surface of the tuber. In large lesions, the skin becomes wrinkled in concentric rings as the underlying dead tissue desiccates (Fig. 1). Internal symptoms are characterized by necrotic areas shaded from light to dark chocolate brown or black. This necrotic tissue is usually dry (hence the name “dry rot”) and may develop at an injury such as a cut or bruise. The pathogen enters the tuber, often rotting out the center (Fig. 2). Rotted cavities are often lined with mycelia and spores of various colors from yellow to white to pink (Figs. 2, 3). 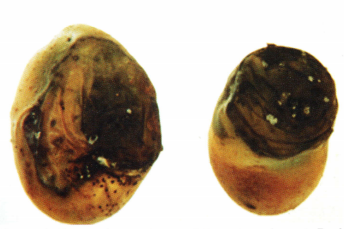 Figure 1. External symptoms of Fusarium dry rot. Dark depressions form on the surface of the tuber, and the skin becomes wrinkled as the underlying tissue desiccates. 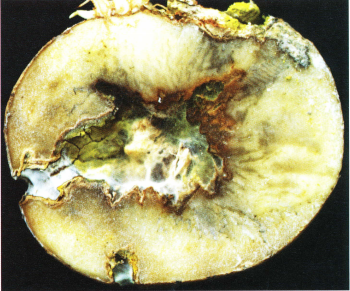 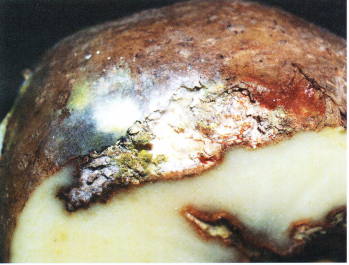 Figure 3. Clumps of mycelium and white to pink to yellow sporulating masses form on the surface of dead skin.

Dry rot diagnosis may be complicated by the presence of other tuber pathogens. Soft rot bacteria (Pectobacterium spp.) often colonize dry rot lesions, especially when tubers have been stored under conditions of high relative humidity or tuber surfaces are wet. Soft rot bacteria cause a wet, slimy rot, which can rapidly engross the entire tuber and mask the initial dry rot symptoms (Fig. 4). Dry rot may also accompany late blight infections of tubers and be followed by soft rot bacteria, leading to tubers with symptoms of all three diseases (Fig. 5). 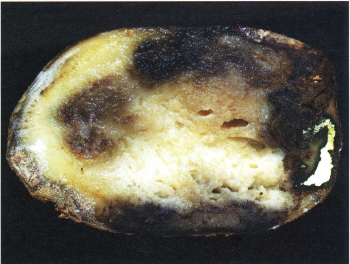 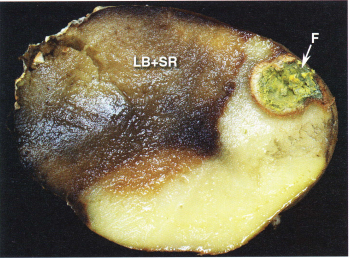 Pythium leak and pink rot also cause brown to black internal discoloration of tubers. However, these are wet rots, and tubers exude a clear fluid when squeezed.

Fusarium dry rot is caused by several fungal species in the genus Fusarium. Fusarium sambucinum (teleamorph Giberella pulicaris) is the most common pathogen causing dry rot of stored tubers in North America, but other Fusarium species are also known to cause dry rot, particuluarly F. solani var. coeruleum and F. avenaceum. In Michigan, F. sambucinum is probably the main causal agent of dry rot, but F. solani var. coeruleum may also be present.

Fusarium species are common in most soils where potatoes are grown and can survive as resistant spores free in the soil for very long periods of time. There are two main opportunities in the potato crop cycle for Fusarium species to infect potato tubers in the spring and in the fall (Fig. 7). Fusarium sambucinum is dormant, and consequently there is minimal development of dry rot in storage. However, some level of Fusarium dry rot is almost always present in commercially available seed. During the preplanting phase of potato production, seed tubers are warmed to about 54 degrees F, then cut into seed pieces prior to planting. Tubers infected with F. sambucinum are particularly susceptible to the development of seed piece decay during this phase. In cases of severe disease, seed pieces may rot completely before planting. Alternatively, after planting, more than 50 percent of sprouts developing on infected tubers may become diseased and killed outright before emergence. Damage at this stage results in delayed or non-emergence and is usually expressed as poor and uneven stands with weakened plants (Fig. 6). Reduction in crop vigor then results from expenditure of seed energy used to produce secondary or tertiary sprouts to compensate for damage to primary sprouts. 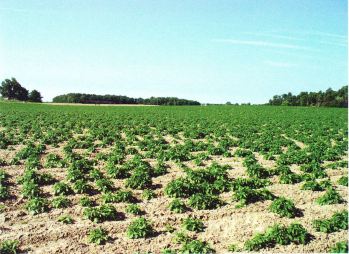 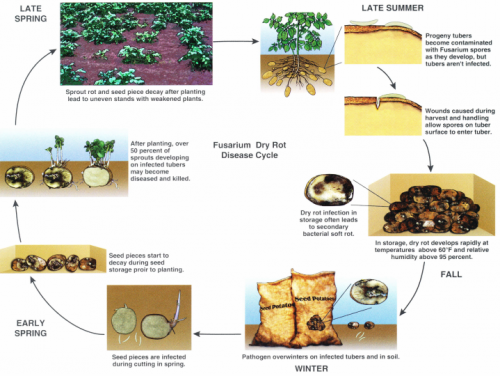 Progeny tubers may become contaminated with Fusarium spores as they develop in the late summer and early fall. Tubers are not usually infected until harvest because the pathogen cannot cause infection unless the potato skin is ruptured, which rarely occurs during the growing season. Wounds caused during harvest and handling provide dormant spores on the tuber surface with multiple points of entry into the tuber. Once the pathogen has penetrated the tuber skin, it begins to grow in the tuber tissue, causing dry rot lesions at the point of entry (Fig. 2). In storage, dry rot develops most rapidly at high relative humidity and temperatures of 60 degrees to 70 degrees F. Lower humidity and temperatures retard infection and disease development. However, dry rot may continue to develop at the lowest temperatures safe for storage of potatoes. Young tubers appear to have some resistance to dry rot, which slows disease. Dry rot progresses noticeably faster during the latter half of the storage season.

From about 1970 to 1985, control of dry rot was primarily and effectively achieved by the postharvest application of thiabendazole (Mertect). However, from the late 1980s onwards, many strains of F. sambucinum became resistant to the benzimidazole fungicides, such as thiabendazole and thiophanate-methyl, resulting in poor control of dry rot. The pathogen infects throughwounds; therefore, modification of tuber handling to reduce wounding during harvest and storage and the use of an effective seed treatment in combination with good management practices during cutting and storage of cut seed before planting are essential to reducing Fusarium dry rot.

Some level of Fusarium fry rot is almost always present in commercially available seed. Even though it is not possible at present to be 100 percent sure that a seed lot is completely free of dry rot, it is sensible to plant seed that meets established seed certification standards. Practicing the following procedures will help prevent dry rot:

Currently, no commercially available biological control products are registered for the control of Fusarium dry rot. However, studies are under way at MSU to evaluate the use of biofungicides containing the biological control bacteria Bacillus subtilis (Serenade, AgraQuest) and B. pumilus (Sonata, AgraQuest), and the biocontrol fungus Trichoderma harzianum (T-22 Planter Box, Bioworks) for control of Fusarium dry rot on potato. These compounds are being evaluated both as seed treatments and for post-harvest application in storage.

Several products have been developed specifically for control of seed-borne potato diseases (Table 1) and offer broad-spectrum control for Fusarium dry rot, Rhizoctonia, silver scurf and, to some extent, black dot (Colletotrichum coccodes). These include Tops MZ, Maxim MZ (and other Maxim formulations + mancozeb) and Moncoat MZ. The general impact of these seed treatments is marked by improved plant stand and crop vigor, but occasionally, application of seed treatments in combination with cold and wet soils can result in delatyed emergence. The delay is genereally transient, and the crop normally compensates. The additional benefit of the inclusion of mancozeb is for prevention of seed-borne late blight.

a Fungicide Resistance Action Committee, See (http://www.frac.info) for more information.
b Specific instructions are included on the labels of all of the products, and these must be adhered to.
c Rate of application is per acre at 34-inch spacing between rows (in-furrow) and per 100 lb of tuber seed pieces (seed treatment, wet or dry).
d + signifies excellent activity against dry rot.

Studies at MSU have shown that the most effective control of Fusarium dry rot is achieved by the application of an effective fungicide, such as fludioxinil (Maxim-based products), prior to planting. Treatment of infected seed pieces with Maxim MZ at 10, 5 or 2 days before planting significantly reduced the percentage of diseased sprouts per tuber and significantly reduced seed piece decay in the varieties Pike and FL 1879. Although it may not seem cost-effective to apply seed treatments to healthy seed, these results suggest that applying a seed treatment up to 10 days prior to planting can provide effective control of dry rot and increase rate of emergence, rate of canopy closure and final plant stand.

Although largely ineffective, thiabendazole remains registered for post-harvest use on tubers. Few alternative compounds are available for potato tuber treatment in storage; these include chlorin-based disinfectants such as sodium hypochlorite, calcium hypochlorite and chlorine dioxide. Limited information is available on the effectiveness of chlorine dioxide on potato storage pathogens, and results of some studies have suggested that chlorine dioxide does not provide effective protection against Fusarium dry rot.

Studies are under way at MSU to evaluate several of the new reduced-risk fungicides for use in post-harvest applications. These fungicides – Quadris, Phostrol and Oxidate – are all currently registered for foliar application to potatoes in the field.