Rebuilding an Eroding Bank on an Inland Lake (E3198)

Every year, more people buy or build homes, cabins or recreation spaces on one of Michigan’s many inland lakes. In years past, if their shorelines showed signs of erosion from wind, wave and ice action, many shoreline property owners would “harden” them with rock riprap or vertical seawalls. Unfortunately, this practice has resulted in the cumulative loss of shoreline and shallow water habitat on Michigan inland lakes (O’Neal & Soulliere, 2006).

ESLs (sometimes referred to as “vegetated geogrids”) are vegetative bioengineered structures that are usually built on a rock base. They are useful in rebuilding eroded, vertically faced banks. Soil layers are “encapsulated” inside of biodegradable fabric to form the lift. Each new course, or layer, of lift is placed on the preceding course but stepped back to create the desired slope. Lifts may be continued up to a height of 8 feet. They are planted or seeded to long-rooted native plants that help to stabilize the soil layers.

ESLs on a rock base are especially useful on lakefronts that experience moderate to high wind, wave and ice action, and where significant soil loss has occurred (Herbert, Schutzki, Skubinna, Lounds, Majka, Bohling, & Tripp, 2010). They may also be used to replace failing seawalls. Once established, these vegetated systems create a new slope with root structures that can withstand the erosive forces of wind, waves and ice (Eubank & Meadows, 2002). ESLs have traditionally been built on-site, but in recent years, prefabricated (factory-built) versions called coir fiber block systems have become available.

In 2011, a 3-year study began at the Shoreline Management Demonstration Area (www.shoreline. msu.edu) on Gull Lake at the W. K. Kellogg Biological Station (KBS). The study was designed to compare the effectiveness of two types of ESLs that are used to stabilize shorelines:

Similar plant species and planting plans can be used with both lift types.

We predicted that traditional and prefabricated soil lifts would perform similarly – allowing contractors to choose either technique based on project-specific time and budget constraints.

We compared the performance of traditional and prefabricated ESL structures over a 3-year period. To accomplish this, 40 linear feet of a traditional lift (T-lift) and 40 linear feet of a prefabricated coir-block lift system (P-lift) were constructed side-by-side on an 18-inch-high rock base on a moderate- to highenergy shoreline. The Ordinary High Water Mark (OHWM) at this site was determined to be 18 inches. The rock base was built to that height to avoid continual inundation of the lower lifts, and lined with nonwoven geotextile fabric to avoid slumpage. 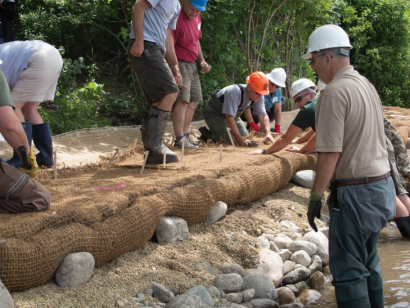 Figure 1. Workshop participants install a prefabricated soil lift at Kellogg Biological Station near Hickory Corners, Michigan, in July 2011. The participants were Certified Natural Shoreline Professionals (CNSPs) who earned continuing education units by installing traditional and prefabricated ESLs for this comparison study during a one-day workshop. You can watch a brief video about the installation at www.shoreline.msu.edu/shorelinemgt/natural-shorelineconstructing-encapsulated-soil-lifts/. 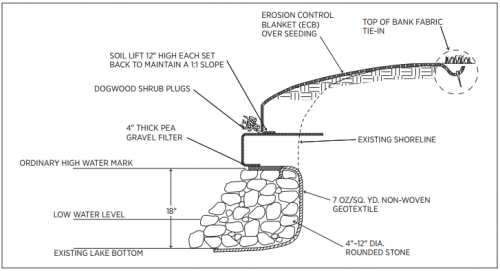 Both structures were planted following identical planting plans, which included:

The side-by-side lift structures (see fig. 3) were exposed to similar site conditions, such as sunlight, precipitation, and wind, wave and ice action. We monitored both structures to compare:

* “Not observed” means the species was not observed on the site during the study period.

Note: All plant identifications were made when the plants were in bloom. 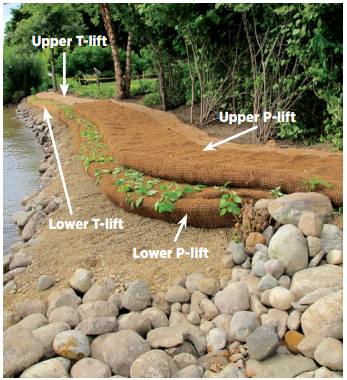 Plants were monitored using percent vegetative cover estimates at ground level inside 20 half-meter quadrats (small plots used to study plant or animal populations). Five quadrats were located along established transects in each of the four lifts. Woody shrub (Cornus spp.) establishment was monitored by direct stem count. Lift performance was monitored through observation and characterization on a three-point scale where:

The greater vegetation densities observed on the traditional lift may be explained by the availability of irrigation. A period of low precipitation soon after construction (in August 2011), and then a significant drought in 2012, created the unanticipated need to irrigate the lifts. Unfortunately the irrigation didn’t reach most of the P-lift structure, which may have contributed to its lower percent cover.

With or without irrigation, both lift structures followed the same growth pattern – reduced percent cover in Year 2 and then a rebound in Year 3. This pattern may reflect the combined Year 2 effect of no more annual cover crop and severe drought. The rebound in Year 3 may be because it typically takes longer to establish native plants from seed than it does turf grass and forage crops. 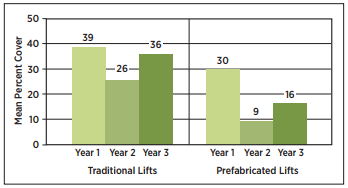 Figure 4. A comparison of the mean percent vegetative cover over the 3-year study period on the traditional (T-lift) and prefabricated (P-lift) lift structures.

Although the T-lift structure initially had more native and nonnative weed species than the P-lift structure, by Year 3 there was no significant difference in the number of different weed species observed (see fig. 5). However, by August 2013, the vegetative cover on the P-lift was made up almost entirely of weeds. (Note: Weeds, both native and nonnative, were recorded and then removed from the study area.) Again, drought and lack of irrigation may have played a role in the poor establishment of any type of vegetation on the P-lifts. 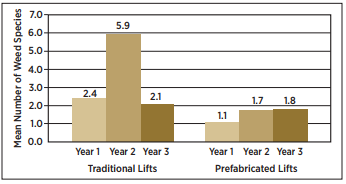 Figure 5. A comparison of the number of native and nonnative weed species present on traditional and prefabricated lifts over the 3-year study period.

Shrub (Cornus spp.) survival decreased over the study period (see fig. 6). The low moisture conditions created by the coir block in the nose of the P-lifts initially created concern about adventitious rooting (roots growing from along the stem) and shrub survival. However, there was no significant difference in survival of shrubs in the two structures. Surviving shrubs in the T-lift did appear to be more vigorous in 2013.

The root masses created by the surviving shrubs will eventually colonize the soil layers in both structures, creating a stable, rebuilt bank. Planting more shrub plugs directly into the lifts is an option for the future.

Total lift failure is defined as a complete collapse of soil layers and loss of soil into the lake. None of the lifts failed during the study period. 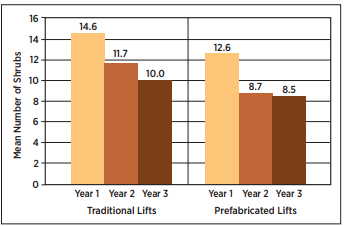 Figure 6. A comparison of Cornus spp. shrub survival over the 3-year study period.

Grazing of all plants and shrubs by deer or other animals was evident on both structures. The upper T-lift, with just the ECB to encapsulate the soil layer, experienced damage from deer traffic almost immediately. The damage did not result in total lift failure and the lift was eventually stabilized by the roots of growing plants. The upper P-lift, equipped with the ECB, the coir-block system and the builtin protective coir-block nose, appeared to be more resistant to damage from deer traffic than the T-lift.

Most of the species in the seed mix used on the lifts are adapted to wetland conditions (Herman, Masters, Penskar, Reznicek, Wilhelm, Brodovich, & Gardiner, 2001). The placement of the lifts above the OHWM appears to have impeded the movement of lake water (through capillary action) to the soil layers during normal water levels.

Waves provided some water to the lower T-lifts, but plants in the lower P-lifts were denied that benefit because the coir block soaked up the water before it could reach the inner soil layer. This design relegated the seeding and shrub plantings to mostly dry, upland soils. While the soils were irrigated periodically, they mostly depended on precipitation for moisture. Lack of water was most likely a major limitation to the germination and survival of a number of wetland species in the seed mix.

We conclude that, in terms of the following factors, there were no significant performance differences between the traditional and prefabricated ESLs at the study site over the 3-year study period:

Based on lessons learned from this project, we advise contractors to consider the following suggestions when designing and constructing encapsulated soil lifts: