Primarily two and three-needled pines such as Austrian, Scotch, red and ponderosa pines. 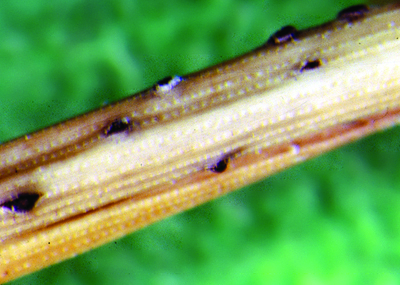 Close-up of pycnidia on needle. Pycnidia are small but visible at the base of dead needles when pulled from the needle sheath. Pycnidium is less than 1mm in diameter. 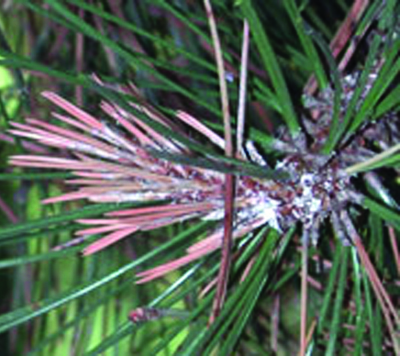 Needles of diseased shoots are stunted and straw colored, and have patches of dried resin near the base.

This disease is more severe on drought stressed trees. This fungus is an opportunistic pathogen that can live as an endophyte in healthy tissue and a saprophyte in dead tissues. The fungus overwinters as pycnidia on cones, diseased shoots and branch cankers, Spores ooze out of the pycnidia during wet periods and infect new needles in spring. The fungus can be spread on infested pruning tools.

Replace severely infected trees with resistant species. Pruning may be done to remove infected twigs and cankered branches to improve the trees appearance, but since the fungus also overwinters on cones, it isn’t likely that this practice will stop new infections. Prune only when the foliage is dry, and disinfest tools frequently during pruning or wait until late fall or winter to prune. Fungicides should be applied beginning when buds develop in spring until candles are fully expanded. Consult your local Extension agent for current recommendations. Avoid excessive fertilization. Keep trees watered during periods of drought, but avoid overhead irrigation.

Print a PDF of this page: Sphaeropsis tip blight (Diplodia)