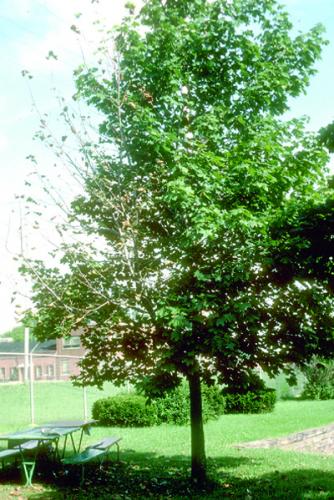 Symptoms of chronic infection include: sudden wilting, leaf yellowing or scorching in a portion of the crown, often on one side. Foliar symptoms are most likely to appear during July and August, when plants are under water stress. Other symptoms of chronic infection include undersized foliage, poor growth, abnormally heavy seed set and twig and branch dieback. Plants may also become severely infected, wilt and collapse in a short period of time. Acutely infected plants may show: leaf curling or browning; foliage or areas between veins abnormally colored red or yellow; partial defoliation; wilting and branch dieback, often on only one branch or side of the tree or shrub. Verti-cillium wilt can also cause sudden death of a tree or shrub.

The fungus enters through wounds or natural openings in roots. Once inside the plant, it produces spores that move through water-conducting tissues. The fungus is found in soil and may persist in the ground for many years. 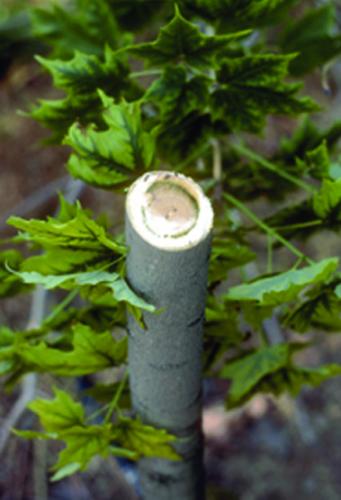 Olive-brown streaking in the wood is often found in maples infected with verticillium wilt. Colors vary in other hosts: black-to- brown or grayish green; some trees, such as ash, rarely show any streaking.

Confirm your field diagnosis by sending a sample to MSU Diagnostic Services for positive identification. Fungicides are not effective against this disease. Avoid using a susceptible host as a replacement when replanting in an area where a plant has died of verticillium wilt. Avoid using wood chip mulch made from trees or shrubs that died from verticillium wilt, as recent research suggests that the fungus may remain viable in wood chips for considerable periods of time. Trees and shrubs reported as resistant to verticillium wilt that could be considered as replacements include: arborvitae, fir, juniper, larch, pine, spruce, yew, birch, beech, boxwood, ginkgo, hawthorn, hickory, honeylocust, hophornbeam, katsura, mountain ash, bur and white oaks, pear, sweetgum, sycamore, walnut and willow. 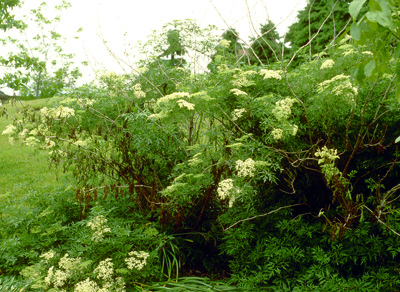 Symptoms of verticillium wilt on elderberry in mid-summer; note wilting and dieback of branches.

Print a PDF of this page: Verticillium wilt