Table 1. How many weed seeds are in the weed seedbank?

Seedbanks are made up of numerous weed species although only a few species will comprise 70 to 90 percent of the total seedbank. Common lambsquarters (Chenopodium album) is the dominant weed seed in many field soils in the north central region of the United States, including Michigan. Common lambsquarters dominated the weed seedbank in three of five cropping systems at the Long Term Ecological Research (LTER) site at the Kellogg Biological Station in Michigan (Figure 1). 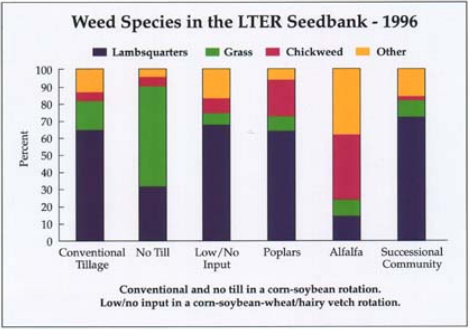 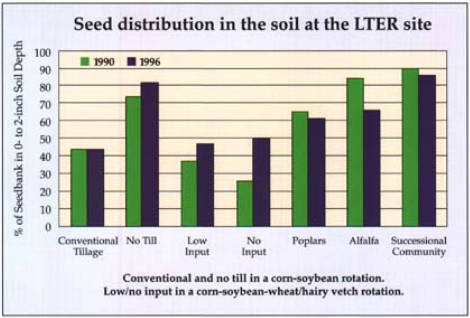 Weed seeds can reach the soil and become pat of the seedbank through several avenues. The main source of weed seed in the seedbank is from, weeds that matured in the field and set seed. Annual weeds produce large numbers of seeds (Table 2, Renner, 1999). Weed seed can also enter the seedbank by wind, water, animals, birds, and human activity. Some weed seeds (such as dandelion) are wind-dispered. Weed seeds can reach a field site following flooding of drainage ditches or adjacent rivers. Wildlife and livestock can spread weed seed, either directly or by spreading of manure. Farming operations can add weed seed to the seedbank by moving soil that contains weed seeds on farm equipment or moving weed seeds to other fields when harvesting crops.

A weed seed can have numerous fates once it is dispersed in a field (Figure 3, Renner, 1999). Some weed seeds will decay in the soil. Other seeds will decay in the soil. Other seeds will not decay but will no longer have the ability to germinate (the seeds are not viable). Some weed seeds will germinate and die, while other weed seeds will germinate and emerge. Some weed seed will be predated by various predators including birds, rodents, crickets, carabid (ground) beetles, and ants. Seed predation occurs mainly on or near the soil surface. Many weed seeds will remain dormant in the soil and not germinate regardless of environmental conditions. However, dormancy is not permanent and seeds of many weed species change from a state of dormancy to non-dormancy. This is called dormancy cycling (Figure 4, Renner, 1999). Seed dormancy is a survival mechanism and it is a major barrier to weed control in agroecosystems. Only a fraction of the weed seeds (less than 10 percent of most weed species) germinate each year. Therefore dormant seeds perpetuate the weed seedbank and weed populations in farm fields. 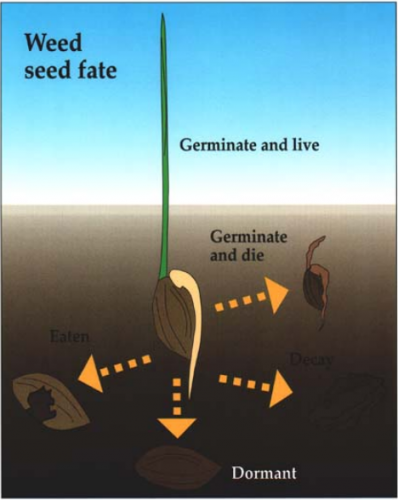 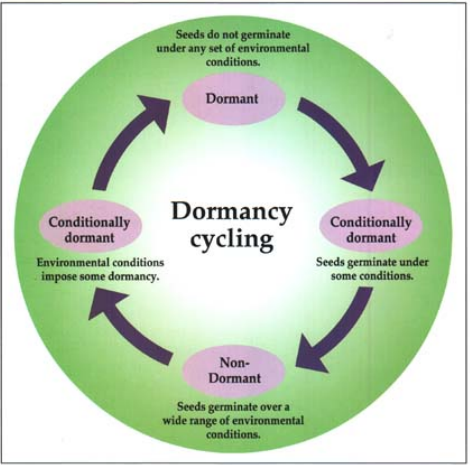 Under agricultural conditions the average time that a weed seed will persist in soil and still be capable of germinating (remain visible) is less than five years. Some weed species will have more persistent seed than others. Velvetleaf (Abutilon theophrasti) and clovers (Trifolium sp.) have persistent seedbanks. Tillage also influences seed longevity in soil since weed seeds usually remain viable longer if they are buried. Seed on or near the soil surface is exposed to predators and seed decay which reduces seed persistence.

The best way to manage the weed seedbank is to not allow weeds to set seed in the field. Over a six-year period in Colorado, common lambsquarters and redroot pigweed seeds were reduced to 6 and 1 percent, respectively, of the original seedbank in a continuous corn rotation where herbicides were applied and the fields cultivated (Schweizer and Zimdahl, 1984). In a Nebraska study, the broadleaf and grass weed seed density in soil declined by 95 percent over a five-year period. However in the sixth year weeds were not controlled and the weed seedbank increased to within 90 percent of the original level at two of five locations (Burnside et al., 1986). These studies illustrate two important points in weed seedbank management. First, there is a rapid decline in the weed seedbank when weeds are not allowed to set seed. Secondly, the few weed seeds remaining in the weed seedbank are capable of infesting the farm fields and returning the number of weed seeds in the seedbank to high levels. Therefore weeds must be managed every year to reduce the weed seedbank.