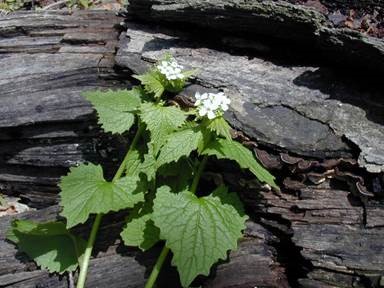 A comprehensive plan for managing garlic mustard via conventional means includes the following elements adapted from Nuzzo (1991). Because garlic mustard is a disturbance-adapted plant, all management efforts should strive to reduce soil and vegetation disturbance to prevent giving further advantage to garlic mustard.

Pattern of spread and management strategy
Garlic mustard spreads from established (core) infestations along an invasion front. Satellite infestations occur when seeds are transported to new areas. This often occurs along trails, roads or forest edges. Top priority should be given to annual removal of all satellite infestations to prevent further spread. 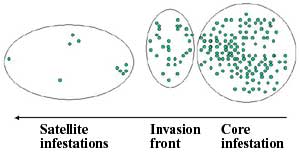 Where garlic mustard is not established, efforts should focus on detecting and eradicating infestations before a seed bank develops. Pulling individual garlic mustard plants by hand is the simplest and most effective approach to managing small or isolated infestations. When pulling plants, it is important to remove the upper portion of the roots as well as the stem, since buds in the root crown can produce additional stems. All pulled plants should be removed from the site as seed ripening continues even after plants are pulled. Repeatedly hand pulling of garlic mustard is reported to be effective for control in small areas but has limitations. Because seeds remain viable in the soil for up to 10 years, it is important to pull all garlic mustard plants in an area every year until the seed bank is exhausted and seedlings no longer appear. This will require multiple efforts each year as rosettes can continue to bolt and produce flowers over an extended period (April-June). In fire-adapted communities, regular prescribed burns may deter garlic mustard from entering by stimulating native communities and killing early invaders.

In medium to large sized infestations, a combination of hand pulling, cutting or localized herbicide treatment is appropriate for managing garlic mustard. First, an aggressive effort at hand pulling all newly established or "satellite" infestations is recommended to limit garlic mustard's spread. Next, consider managing well-establish "core" populations with a combination of pulling, cutting and or herbicides.

Cutting: Cutting flowering plants at ground level by hand or with a string trimmer or lawn mower will kill a high percentage of garlic mustard plants. The lower the cut, the more effectively the plant will be killed. If the plants are flowering, it is important to remove all cut stems since seed development will continue even if the stem is severed from the root. Because mechanical cutting does not remove the root crown, it may be necessary to cut multiple times in a season to prevent seeds from developing on secondary stems that sprout from the rootstock. It will also be necessary to cut for many consecutive years until the seed bank is exhausted. Unselective cutting with a string trimmer or lawn mower damages desirable vegetation and may slow re-establishment of desirable vegetation or even allow garlic mustard populations to expand. The goal is to selectively remove garlic mustard, leaving the desired plant community intact.

Herbicides: Several herbicides have a role in garlic mustard management. Herbicides should only be applied according to their label directions and using the protective equipment specified. Use of application equipment that can direct the herbicide to the target plant and reduce overspray or drift onto non-target plants is required. This is referred to as spot treatment.

It is very important to limit damage to non-target vegetation. If other plants are killed, garlic mustard will likely replace them. Indiscriminate herbicide applications can thus increase garlic mustard populations! As with cutting, the goal is to selectively remove garlic mustard leaving the desired plant community.

As a cool season herb, garlic mustard continues to grow on snow-free days when temperatures exceed freezing. This provides an opportunity for selective treatment of garlic mustard if applications are made when other plants have not yet appeared (spring) or have died for the year (late fall).

Application of 1-2% glyphosate (Roundup) provides effective control of garlic mustard seedlings and rosettes. Note: glyphosate is a non-selective herbicide meaning that it will kill or damage most plants it comes into contact with (including woody plants). However, to be effective, this herbicide must be absorbed by growing leaf tissue or bark, i.e. the plant must be actively growing. Applications in very early spring (March-April) can often be timed for periods when few if any other plants beside garlic mustard are actively growing. Similarly in late fall, applications can be made with reduced risk to many non-target species. However, glyphosate will damage sedges and other species that are actively growing at this time and therefore susceptible to herbicide uptake. Always take precautions to avoid contacting desirable plants with the herbicide. This may include the hard to see stems of small woody shrubs and trees. Bentazon (Basagran) applied at 8 ounces (by weight) per acre may be an acceptable substitute, less effective on garlic mustard but with reduced risk to some non-targets particularly annual and perennial grasses.

Prescribed fire: Professional land managers trained in the use of prescribed fire may also consider burning for control of medium to large infestations of garlic mustard. The effectiveness of fire differs based on site characteristics and management goals. Most research shows that dormant season fires (March) are ineffective in garlic mustard control and that growing season fires (May) suppress garlic mustard but also adversely affect native understory forbs. Carefully timed spring fires (after garlic mustard emergences but prior to emergence of desirable plants) may be effective. While a single dormant season fire (fall) might actually increase the abundance of garlic mustard the following spring, repeated burns (fall, spring, spring; or spring, spring, spring), have been used to maintain garlic mustard in a reduced condition and stimulate herbaceous species richness and cover. This fire regime did not reduce the number of woody shoots but did decrease their height in the fire-adapted oak woodland where it was tested. Fire accelerated loss of woody seedlings on upland but not lowland sites.

Extensive work on conventional controls has failed to yield practical methods for control of generally infested areas on county, state or regional scales. Natural area managers report that the above measures are generally too labor intensive for all but the most critical of sites and overall they are losing the battle with this invasive species. Biological control appears to be a promising option for long-term control of extensive infestations.

Importation biological control of weeds is highly regulated in the United States. All prospective importation projects fall under the supervision of the USDA Technical Advisory Group (TAG) on Weed Biological Control. This committee reviews potential importations considering specific potential risks and benefits. Extensive testing is required by the TAG to evaluate the host specificity of a natural enemy. Once approved for importation by TAG a natural enemy must undergo further testing under quarantine conditions to determine that it is the desired species and is free of diseases or other contaminates.

From an initial literature survey, 70 insects and 7 fungi attacking garlic mustard in the home range were identified. Of these, 5 species of weevils (Curculionidae) and one leaf-feeding beetle (Chrysomelidae) were determined to have the greatest potential impact and were selected for further testing. The leaf beetle, Phyllotreta ochripes (Curtis), has since been rejected because it feeds too broadly. Testing is currently focusing on five species of Ceutorhynchus weevils. Adult C. alliariae and C. roberti feed on leaves while the larvae mine in stems and leaf petioles. These two species exhibit very high attack rates in the field (generally greater than 80 percent of garlic mustard infested). Larval C. scrobicollis are root miners while C. constrictus and C. theonae are seed feeders. Host-specificity testing on the Ceutorhynchus weevils is promising. The USDA Technical Advisory Group (TAG) on weed biological control may permit initial introductions of C. scrobicollis in 2004. Other natural enemies will likely follow as indicated by host specificity tests and USDA TAG review.

The effort to explore garlic mustard biological control is being conducted by a consortium involving many state and federal partners. A similar consortium was highly successful in implementing biological control of purple loosestrife in North America. Michigan was a part of the purple loosestrife consortium contributing research and education products for national use and benefiting from the receipt, release and establishment of the effective Galerucella natural enemies.