MSU has been named a Clean Air Research Center by the Environmental Protection Agency (EPA). 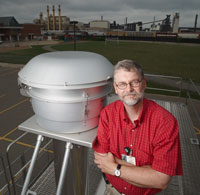 To explore one of the most critical health/environment intersections -- how the very air we breathe can cause heart disease and diabetes and contribute to the problems of obesity -- Michigan State University (MSU) has been named a Clean Air Research Center by the Environmental Protection Agency (EPA).

A five-year, $8 million EPA grant will fund three major research projects with the creation of the Great Lakes Air Center for Integrative Environmental Research, led by MSU AgBioResearch scientist Jack Harkema. The research team will study the exact role that air pollutants, most notably fine particles and ozone, play in cardiometabolic syndrome, a collection of interrelated risk factors leading to cardiovascular and metabolic diseases that affect about one-third of adult Americans.

Signs of cardiometabolic syndrome include high blood pressure and sugar levels, abnormal triglycerides and cholesterol as well as obesity -- all warning signs for the development of chronic diseases such as diabetes and atherosclerosis.

MSU is one of four Clean Air Research Centers named by the EPA -- Harvard University, the University of Washington in Seattle and Emory University/Georgia Institute of Technology in Atlanta are the other recipients. The $32 million federal effort aims to study a range of exposures to air pollution sources and their health effects across various life stages, among susceptible and vulnerable populations, and across communities where exposures may pose a greater health risk.

"Air pollution in the Great Lakes region is complex because of a large diversity of multipollutant ‘airsheds’ [the atmospheric equivalent of watersheds]," said Harkema, whose research team includes investigators from MSU, the University of Michigan and Ohio State University. "This complexity is due to a large assortment of emission sources, including heavy industry, dense motor vehicle traffic and high concentrations of coal-fired power plants. The health effects of these multipollutant airsheds are complex and understudied."

The newly established Clean Air Research Center at MSU will:

In addition to the three main projects, researchers at the new center will collect and characterize air pollution data for use by all the investigators.