Beefing up the numbers: Looking at ways to assist local food systems

MSU AgBioResearch scientist Jason Rowntree is looking at ways to improve the economics of small and medium-sized beef producers in the upper Great Lakes region.

Locally produced foods are a small but growing facet of U.S. agricultural sales. The U.S. Department of Agriculture (USDA) estimates that the farm-level value of local food sales totaled $4.8 billion in 2008, less than 2 percent of the U.S. market for agricultural products. An estimated 107,000 farms are engaged in local food systems, or about 5 percent of all U.S. farms.*

Jason Rowntree, Michigan State University (MSU) assistant professor of beef cattle and forage utilization, is looking at ways to beef up those numbers – literally. He says that, although consumers are increasingly demanding locally sourced food products, they have little choice at the supermarket, especially in protein selection. In fact, he said, less than a handful of corporations control about 90 percent of global meat distribution.

“I’m not saying that we shouldn’t have multinational companies. In fact, I have many friends employed by those types of facilities,” he said. “My point is -- should we, as a community or even as a nation, completely rely on those companies to provide that food? I think what we need is a dichotomy of food production systems that will help add resiliency to our local communities.”

Rowntree is looking at ways to improve the economics of small and medium-sized beef producers in the upper Great Lakes region. He has developed a local food system model in the Lake City area that includes 20 local cattle producers who will each provide 10 steers as part of the project. Three of the producers are working to convert more than 1,000 acres to a pasture-based model, and two obtained Michigan Department of Agriculture and Rural Development (MDARD) grants to develop on-site packing and processing facilities.

As part of the local food system model, Rowntree has also partnered with a local family-owned grocery store where some of the cattle will be sold. He calls it a “pasture-to-plate” concept with substantial potential to benefit the local economy. Rowntree cites a University of Kentucky study that reveals that every $1 spent on beef cattle production returns $3.50 to the local community. Using that multiplier, Rowntree’s 200-steer project could equate to as much as $500,000 to the surrounding area. 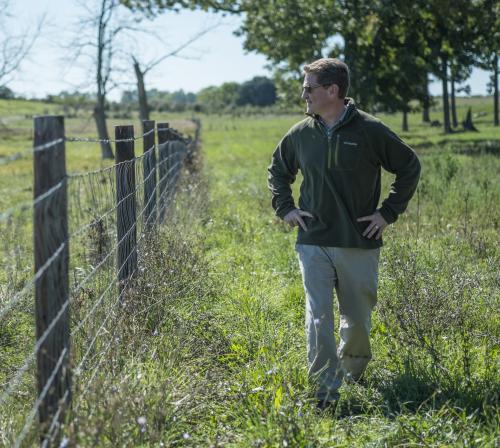 The absence of in-state processing facilities forces Michigan producers to ship cattle out-of-state -- some 500 to 1,000 miles in one direction, Rowntree said.

“The bottom line is that the longer we keep beef cattle in Michigan, the more value it gives to our local economy, regardless if they are grass-fed or grain-fed,” he said. “Local packing and processing is the lifeblood of our communities, and if we don’t have them, we’re completely dependent on someone else to feed us.”

“I’m not trying to pit big business against small business, organic production versus conventional production – that’s not the point,” he said. “The main thing is that there are always challenges in life that put pressure on our food production, whether it’s devastating weather events, energy prices or climate change. When any of those events occur, it immediately puts stress on where our food comes from.”

Rowntree has made it his life’s work to simplify regional food distribution systems. He emphasizes the importance of finding ways to more adeptly link local producers with local consumers to lower input costs while adding value to the system.

With local food celebrations such as Beefstock and Pigstock now under way in Traverse City, Rowntree believes he is in the right place at the right time. (A vast majority of his research is being conducted at the Lake City Research Center in Lake City, just south of Traverse City. He plans eventually to expand the studies to the Upper Peninsula Research and Extension Center in Chatham.) He realizes, however, that there are obstacles ahead.

“The main challenge to a local food system is that a huge integrated packer can process the animal, pack it and ship it to whomever for a fraction of the cost compared to a medium-sized competitor,” he said.

“If there are high fuel costs and trucking becomes too costly, the cost of food will subsequently rise,” he said. “We need to have other strategies that can help supply food to consumers.”

His three-year study is funded by the USDA Sustainable Agriculture Research and Education Program and is expected to conclude in 2016.

Optimizing hoop houses for vegetable production in the U.P.