Biotech in Indonesia and Bangladesh

Dave Douches loves potatoes. He grows them, breeds them, takes them around the world, and makes potato chips. He's even made his chips for former President Obama...

Dave Douches loves potatoes. He grows them, breeds them, takes them around the world, and makes potato chips. He’s even made his chips for former President Obama.

Douches grows purple potatoes, tiny potatoes, and potatoes that are disease-resistant. He does all of this with the help of biotechnology and other scientific advancements, making an already substantial food crop even more beneficial for communities around the globe.

The potato has been a staple in diets around the globe for centuries. Originally from South America, it’s been adapted to countless climates and situations to bring the nutritionally-dense foodstuff to impoverished regions.

Besides being highly productive, potatoes are a crop that farmers can invest in.

“With potatoes, farmers can invest in irrigation, invest in operations that will support the production whether by buying fertilizer or chemicals to protect the crop,” he said.

Smallholder potato farmers also benefit in two ways, they are able to grow a crop that helps feed their families and they are able to grow enough potatoes that they can also make a profit. Because potato’s perishability, it is unlikely the farmers will ever compete with large commercial farms elsewhere. Who knew the potato could form such a nutritional and financial foundation for farmers? But there are issues too.

“Late blight is actually one of the most challenging diseases we face because the pathogen is highly adaptive to what we throw at it,” said Douches.

Late blight is probably most well known for its role in the Irish potato famine. “We’re never going to stop the pathogen. We’re going to manage it with host-plant resistance and other aspects. You don’t put potatoes on a boat and ship them halfway around the world. You grow them mostly where you use them.” This means we have to solve the problem of late blight in country, in the field, right where potatoes are grown.

“Biotechnology was that natural step in the late 80s early 90s,” Douches said. “We were working on that, for insect resistance, and along came late blight in the U.S. as a major problem.”

Douches, whose major accomplishments around potatoes include mapping its genome, concluded that there wasn’t one single answer, but a collection of tools that could compose a management plan.

“It was a realization that I couldn’t sit there with a clear conscience and say I’m not going to explore these biotech tools because some people feel uncomfortable about them, when, as a scientist, I know that the technology is safe and can be used appropriately.”

Much of Douches’ work is funded by the United States Agency for International Development. He said that, in part because of biotechnology, the project is poised for success.

“Technology has advanced. The scientific knowledge that we need has advanced. I believe we can meet our goals and objectives because we have the knowledge base and infrastructure to move forward in an efficient way.”

For more than 30 years, Douches has led the way in potatoes, all the time at MSU. But he doesn’t do it alone. He’s known that MSU was the right place to do this work for a long time.

His international graduate experiences and the recognition that global work is crucial, but he knows that MSU’s grad students and international scholars will take the work around the world.

“Training graduate students is a key component in improving agriculture in countries around the world,” he said. “In our lab, we have a truly diverse group of people. And it’s really beautiful to see them interact.” 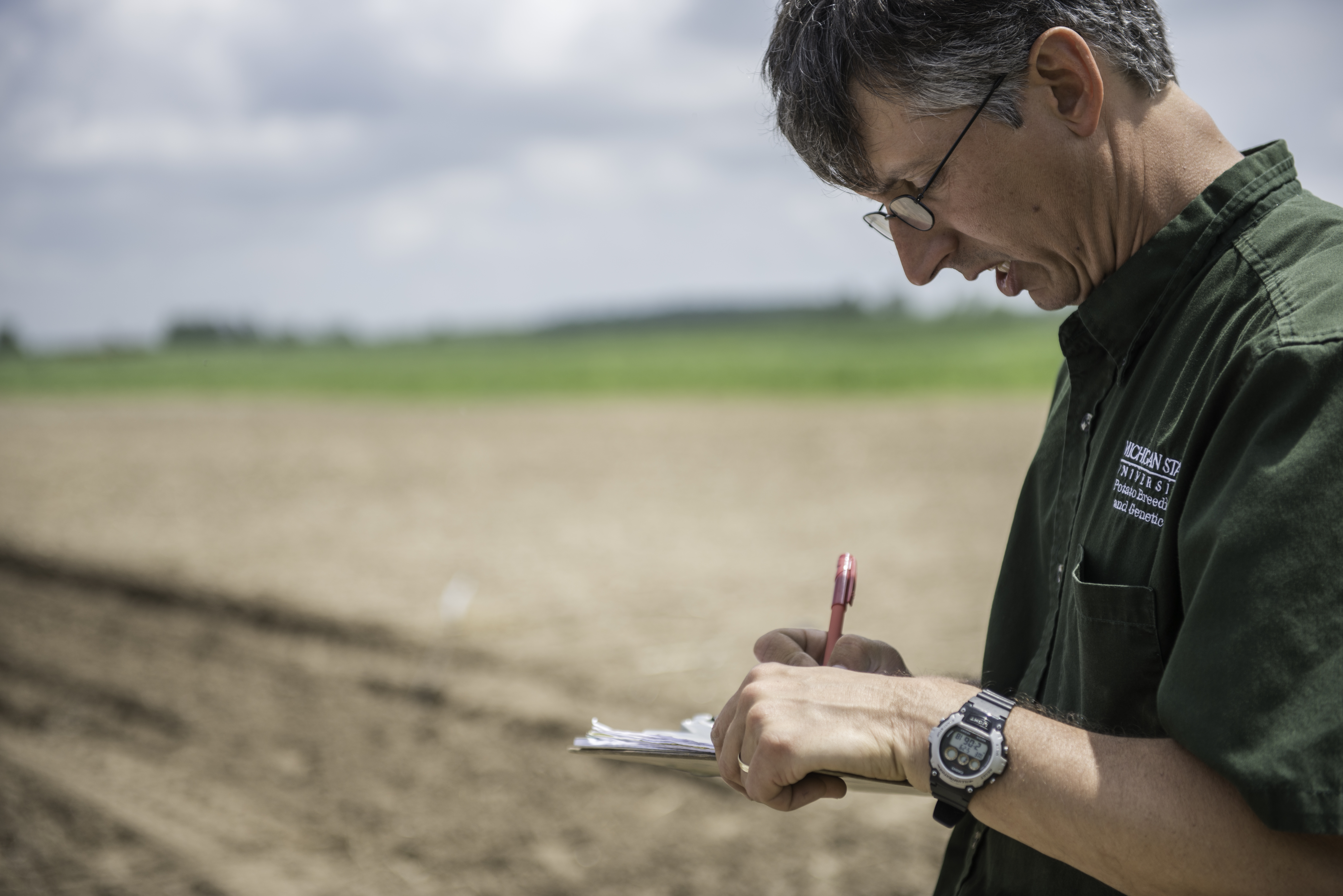