The next phase: Commercialization of biosensor technology

Millions of Americans with diabetes use a variety of meters to check their blood glucose levels and manage the disease. This concept is spurring Michigan State University (MSU) AgBioResearch scientist R. Mark Worden to commercialize a biosensor system that would have widespread applications in other venues, such as food processing facilities or clinical laboratories that assess high volume samples from many sources.

Worden, a professor in the MSU Department of Chemical Engineering and Materials Science (CHEMS), began working in oxidation-reduction reactions, also known as redox, in the late 1990s. These chemical reactions are important in a number of areas, including biofuel production. As the research progressed, Worden developed expertise in nanotechnology and biocatalysts, which are often used to perform chemical transformations on organic compounds.

Over the years, various stages of this project received funding from the National Science Foundation (NSF) and other organizations. In looking at various aspects of these reactions and trying to exploit their economic benefi s, Worden developed a biosensor system that was recently patented by MSU.

Now Worden is collaborating on a new NSF project with Paul Satoh, MSU adjunct professor in engineering and food science and former vice president of research at Neogen, a Lansing-based company that develops and markets products dedicated to food and animal safety.

“This is a grant called ‘Accelerating Innovation Research,’ or AIR. It is not a grant for fundamental research but rather a grant to take previous NSF discoveries and move them toward commercial applications,” Worden explained.

The new project is based on the same principle of conducting chemical reactions on electrodes that was used in past experiments. However, it focuses on translating research on nano-scale bioelectronics to fi l the need for cost- effective biosensor systems that quickly, sensitively and accurately measure concentrations of important compounds.

“The amplified bioelectronics concept of the patented biosensor platform that we developed is important because it offers an unprecedented combination of performance properties, versatility and customizability,” he said.

Worden points out that varying the architecture and recognition molecules in the sensing interface could lead to development of a broad range of commercially important biosensor systems. Applications include screening for therapeutic agents, measuring toxins and pathogens in food and environmental samples, point-of-care testing of biological samples and real-time on-site detection of chemical warfare agents.

“One of the features of the patented bioelectronics sensor platform that we have developed is a technique to amplify the signal and so increase sensitivity, which is an asset for customers using the finished product,” Worden explained.

The patented biosensor was designed  to measure an enzyme in humans that is affected by nerve gases. Worden is now striving to make it applicable to a wider range of enzymes and extending it to antibodies, which are used in detecting diseases and toxins and microorganisms in food. 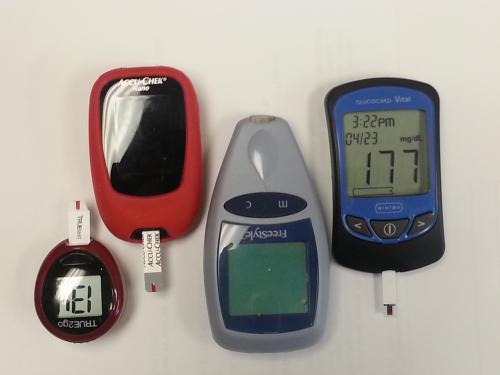 Worden points out that linking the biosensor system to antibodies, proteins produced by the body in response to harmful substances, is useful in food safety applications. Other features of the patented bioelectronics sensor platform include multiple types of biological recognition molecules, compatibility with other commercial biosensor systems and disposable sensing units. These features make the new systems more user-friendly, convenient and cost-effective than competing technologies, he said.

“We are trying to develop electrochemical sensors that companies such as Neogen, which commercializes a variety of food safety test kits, might be interested in,” Worden said.

Conductive Technologies, Inc. will lend technical expertise to the project, and MSU Technologies, the intellectual property unit of MSU, will help guide commercialization. CHEMS students will also be involved and will get innovation and technology-translation experience by participating in all aspects of the research. In addition, students from multiple engineering departments enrolled in the Multidisciplinary Bioprocessing Laboratory course that Worden developed with NSF funds will learn how to work effectively in multidisciplinary research teams.

Worden believes, however, that teaming up with Satoh is the key to success.

“Paul is a big asset for this project because he has worked in industry for many years and has expertise in commercial biosensor development, so he understands the business side of sensor technology,” Worden said. “We believe that combination — my scientific expertise and his business knowledge — will make it possible to move to commercialization of the patented biosensor system.”