MSU AgBioResearch scientist Bruce Dale was honored in June at the International Fuel Ethanol Workshop and Expo in Indianapolis, Ind., for his contributions to the industry. 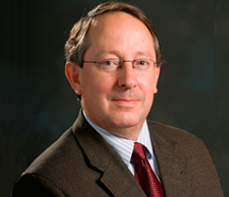 MSU AgBioResearch scientist Bruce Dale was honored in June at the International Fuel Ethanol Workshop and Expo in Indianapolis, Ind., for his contributions to the industry. Dale has devoted his entire career to researching and advancing sustainable biofuels.

Dale, an MSU professor of chemical engineering and materials science, received the Renewable Fuels Association (RFA) Award of Excellence for his extensive research in the areas of, among other things, indirect land use change (ILUC) and the production of cellulosic ethanol -- biofuel produced from wood, grasses, or the non-edible parts of plants.

The RFA said that Dale provides “a much-needed dose of sanity and maturity” to discussions of ethanol’s role in the American transportation fuel sector and commended his efforts to advance the industry.

“His expertise and willingness to engage critics of biofuels when their arguments lack sound scientific standing has been invaluable in forcing fact-based conversations about American ethanol production,” the group stated. “Dr. Dale is well deserving of this award and the Renewable Fuels Association applauds him and thanks him for his ongoing contribution to this industry.”

Over the course of his career, Dale has authored almost 200 refereed journal papers and often finds himself on the witness stand at various policy hearings explaining and clarifying the environmental effects of ethanol production. Earlier this year, he co-authored an analysis of ILUC that found no correlation between U.S. biofuel production and land use change in other countries.

As a leader in the U.S. Department of Energy’s Great Lakes Bioenergy Research Center activities at MSU, Dale devotes much of his research time to the commercialization of cellulosic ethanol. He is the inventor of a cellulosic ethanol pre-treatment process known as AFEX, which recently received U.S. DOE funding to be scaled up out of the laboratory, where it has displayed very promising results for effective cellulosic ethanol production.

Dale said he is extremely honored to receive recognition from the ethanol industry for his research because he recognizes the hard work on the part of many industry members to provide a domestic source of renewable fuel.

“I’m trying to do the same in my own way,” he said. “To have the award coming from people who are actually there ‘walking the walk’ is very gratifying to me.”

"We are very pleased to see Bruce recognized for his outstanding research and leadership," said Steve Pueppke, AgBioResearch director. "He is a testament to the high caliber of researchers with whom we are privileged to work."

A proud grandparent, Dale believes the choices made now about the future of energy will influence his grandchildren’s generation and is optimistic that their generation will be pleased with the outcome.

“We’re going to use fossil fuels for a long time, but we can’t go on pretending that they’re going to last forever and that they don’t have the problems they obviously do have,” he said. “We’ve got to get engaged in this transition to sustainability. We just can’t keep living on the earth’s natural resources without putting anything back. I think my kids and grandkids are going to judge me on how well I did to help this transition, and how well all of us did.”

The Art of Partnership