Approximately 29 percent of diabetic patients over the age of 40 will develop vision loss, or diabetic retinopathy. MSU physiologist Julia Busik is working to bring that percentage down.

The World Health Organization estimates that nearly 350 million people, or approximately 5 percent of the global population, live with diabetes. It is the eighth leading cause of death, and by 2030, it is expected to jump to No. 7. People with diabetes are also at risk for developing a large number of health complications, such as kidney and heart disease, and vision loss. Approximately 29 percent of diabetic patients over the age of 40 will develop vision loss, or diabetic retinopathy. Michigan State University (MSU) AgBioResearch physiologist Julia Busik is working to bring that percentage down.

“With the increase in the rate of the diabetes itself, we’re seeing more patients develop the complications that come with it,” said Busik, an associate professor in the MSU Department of Physiology. “Losing sight is not a laughing matter, and we’re trying to find ways to cure it.”

After four decades of research, scientists have yet to determine the exact cause of diabetic retinopathy. A metabolic condition, diabetes limits the body’s ability to process sugar or glucose, leading to hyperglycemia. Researchers initially thought that this unhealthy increase in blood glucose was the sole cause of the retinal damage that leads to vision loss, but recent clinical trials have begun to reveal a different picture.

One of the effects of diabetes is a condition called dyslipidemia, in which blood has abnormal levels and composition of cholesterol, triglycerides and other fat compounds, collectively termed “lipids.” An emerging trend in clinical trials is a link between dyslipidemia and retinopathy: as dyslipidemia worsens, the abnormal lipid composition exacerbates retinal damage. Busik is working to understand the correlation between the two conditions in the hopes of learning how to control and even prevent vision loss.

Most lipids in the body are produced in the liver, but Busik and her team found that some lipids are actually produced at higher rates and present in higher concentrations in the retina than in the liver and blood. These enzymes produce long-chain fatty acids such as docohexaeonic acid (DHA), which protects retinal tissue from inflammation. Busik’s lab further discovered that, in diabetic animal models, fatty acid elongases are down-regulated by more than 40 percent. Accordingly, the level of DHA was reduced by up to 40 percent in the retina, removing the tissue’s protection from inflammation. Busik demonstrated that diabetic retinopathy can be prevented through a diet high in fish oil, which contains high concentrations of DHA. This approach, however, is far from practical outside of laboratory studies.

“High fish oil diets are not what you want to use in clinical trials,” Busik said. “If you take really high levels of fish oil, other issues, such as the prevention of proper immune system response, can develop. That’s why we’re trying to find the enzymes that directly improve omega-3 production.”

Busik’s lab is now working on the regulation of the enzyme pathways that boost DHA production in retinal tissue so that treatments for diabetic retinopathy can be developed that return patients’ DHA levels to normal. Such treatments would prevent retinal dyslipidemia and, consequently, vision loss. 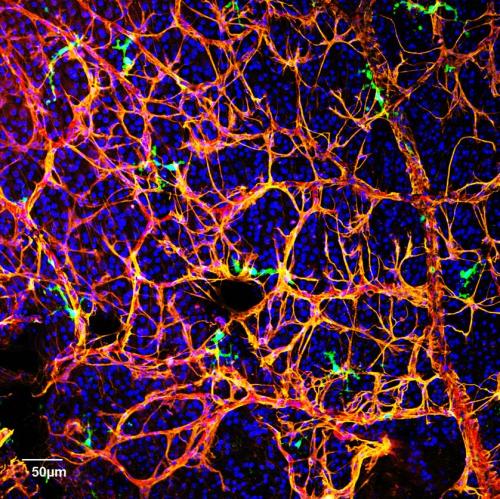 Another cause of diabetic retinopathy is the failure of a special class of cells, called circulating angiogenic cells (CAC), or CD34+ cells in humans, from mobilizing from the bone marrow to repair damage to the retina. In patients with diabetes, these cells do not function as efficiently as they should, and that allows retinal damage to increase over time. Busik’s lab has now begun to investigate the role of lipid imbalance in causing CAC deficiency.

“Our body, when its processes are working correctly, has wonderful potential for repair,” Busik said. “It’s similar to how you don’t bleed to death from a cut on your finger. If the normal repair processes are intact, the body can heal damage to retinal vasculature. Normally, CACs are released from the bone marrow to assist with the microvascular repair process, but in diabetes, this release and function of CACs is impaired. Our challenge is to try to restore CAC release and repair back to normal.”

There is currently no way to prevent or cure diabetic retinopathy, although a number of options exist to help forestall its effects on a patient’s vision. By building an understanding of the mechanisms that drive diabetic vision loss, Busik hopes that new treatments will allow patients to sustain their vision longer, if not forever.

“Even though this is very basic research as we try to understand the mechanisms behind diabetic retinopathy, it’s not just to help us understand this little structure for its own sake,” Busik said. “What we’re doing in the lab is very applicable — it can help people in the very near future.”