In the most recent issue of the journal Elementa: Science of the Anthropocene, Michigan State University (MSU) researchers take a broad, holistic look at Kirtland’s warblers’ migration between the jack pine forests of Michigan and the Bahamas to get a better understanding of what sort of needs the songbirds have along the way, and what kind of ecological and socioeconomic impacts their annual distant movement have across the world.

“As with pretty much all environmental research, it’s just not enough to understand one place or one point in time, because our world is telecoupled – socioeconomically and environmentally connected over distances,” said Jianguo “Jack” Liu, Rachel Carson Chair in Sustainability at MSU and director of the Center for Systems Integration and Sustainability. “It also isn’t enough to just understand the nature in question, because people are so much a part of the problem – and the solutions.”

The Kirtland’s warblers’ fates are tied closely to their specific habitats – they spend their breeding season primarily in jack pine forests of Michigan, and came close to extinction in the 1950s as human activity wiped out many of those forests and parasitic cowbirds further reduced the warblers’ population. 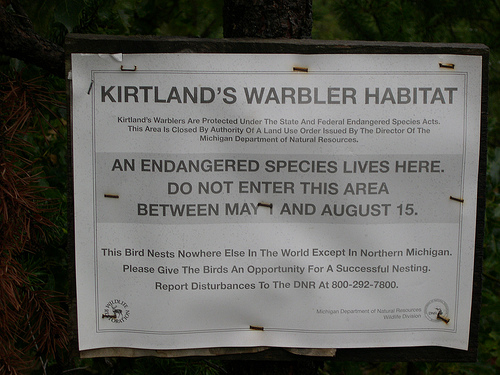 Kirtland’s warblers are conservation-reliant, meaning they survive because humans actively make accommodations to them, and human activities also have compromised their ability to survive. That, the authors say, makes understanding every stop of their migration crucial, and makes the telecoupling framework – a research method that reflects the interactions of all points of that journey.

The telecoupling framework allowed researchers to consider simultaneously their breeding sites, wintering sites, stopover sites, as well as various policies that protect the birds, tourism activities and changing use of land that have fragmented or damaged their habitat, as well as conservation activity that has improved their lot.

This holistic view is important, Liu said, because otherwise efforts to save the Kirtland’s warblers in one area can be rendered less effective if the birds migrate to another area that can’t sustain them. Developing this type of understanding can apply far beyond the warblers and make conservation decisions more efficient for other migratory animals and insects like monarch butterflies.

Using this method also identifies unknowns that demand further study, the authors say. For instance, since the birds spend five months migrating, their stop-over sites are as important to understand as their breeding and wintering bases. Yet little is known about the ongoing suitability of their travel stops, particularly how changing climate may affect those areas between Michigan and the Bahamas and if changes in land use – especially areas converted from forest to farmland – affect the birds’ survival chances.

They also point out the need to know if there are opportunities for people along the bird’s migratory path to communicate with each other, joining in their shared concern for the songbirds.

Besides Liu, “Telecoupling Framework for Research on Migratory Species in the Anthropocene” was written by Jacqueline Hulina, Henry Campa, Vanessa Hull, Wu Yang and Carol Bocetti. All but Bocetti are affiliated with MSU.

Funding was provided by the National Science Foundation and Michigan AgBioResearch.