In our last post, we took a high-level look at the Food Additives Amendment of 1958. In this post, we dive into one section of the amendment that's generated many conversations and much confusion: the Delaney Clause.

What is the Food Additives Amendment of 1958?

The 1958 Food Additives Amendment gave the U.S. Food and Drug Administration (FDA) the authority and responsibility to require manufacturers to provide safety assessments for all new food additives. The evaluation needed to demonstrate that the new additive ingredients would not cause adverse health impacts before the additive ingredients could be added to foods and sold to the public (1). These additive ingredients include food dyes, flavors, preservatives, and more.

The amendment also included a clause championed by U.S. Representative James Delaney to forbid any new, added ingredient shown to cause cancer in humans or animals from entering the food system. The Delaney clause set the allowable carcinogenic additive limit to zero.

However, science is an evolving process. The scientific information and tools available to lawmakers and regulators in 1958 were minimal compared to what we know today (just as 2021 knowledge will look extremely limited in 2084).

In 1958, few ingredients were known to be carcinogenic. Additionally, analytical chemistry and evaluation tools used to detect these levels were not as sophisticated and developed as the tools and processes available to us now (1).

In 1958, scientists would look at an ingredient’s toxicological profile in parts per thousand or parts per million; we now can evaluate at parts per trillion. Keep in mind, a part per million is a tiny measurement representing one part in a whole entity of one million parts.

For example, there are more than 10 million bricks in the Empire State building, which means ten bricks is 1 part per million (ppm). 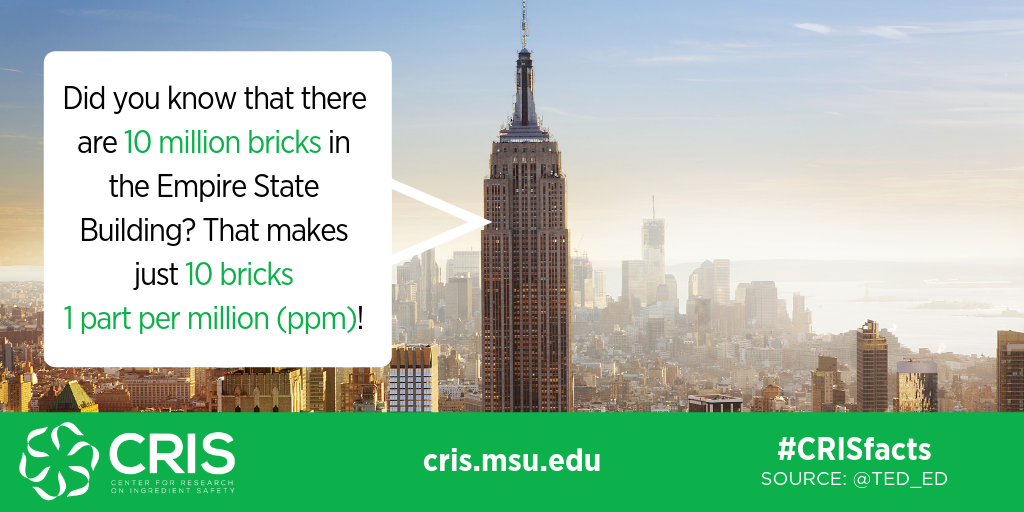 Ted-Ed put together a video that helpfully explains parts per million.

When we talk about parts per billion (ppb) or parts per trillion (ppt), it's an even smaller number. While billion or trillion sounds like it would be a larger quantity, it's a much smaller quantity by a much larger magnitude.

We can say with near certainty that the lawmakers and regulators in 1958 were not considering researchers' current ability to detect 1 ppt of an ingredient with relative ease.

Understanding the nuances associated with the Delaney Clause.

While the Delaney Clause prohibits any ingredient additive that causes cancer, there are exceptions if a proven-safe ingredient contains a contaminant, residue, or impurity that possesses potentially carcinogenic properties (1).

The FDA established a de minimis risk level of 1 ppm for the trace contaminants, residues, or impurities found in an ingredient. The de minimis level reflects the minimal risk that a component of an ingredient could cause harm (1).

Are pesticide residues regulated under the Delaney Clause?

At one point in time, pesticide residue was umbrellaed under the Delaney Clause. In 1996, the Food Quality Protection Act was signed into law, changing how we monitor and regulate pesticide residue.

You can learn more about pesticide residue in our past blog post on the topic.

What about risk assessment?

We know that a hazard does not equal risk, and the dose makes the poison. We know the presence of something that could be harmful doesn't mean it causes harm. Just as the potential for a medication to cause injury doesn't mean it will hurt the person taking it if they take the correct dosage.

We use risk assessments to provide us with an in-depth understanding of an ingredient's actual risk to our health.

Currently, the way the legislation stands, risk assessments do not impact the decision to allow an ingredient into our food system. Any known potentially carcinogen additive, regardless of the risk profile, must be omitted. Even if an ingredient may only cause harm if consumed at excessive levels not feasible in daily life, the ingredient is removed.

Again, this applies to the whole ingredient not the extremely small quantities of contaminants, residues, or impurities that may be present in the ingredient.

As our scientific knowledge advances, it's essential to keep having conversations around legislation and regulations meant to protect our food system and human health.

In the coming years, we can expect to see new tools and improved evaluation processes that can help us implement new systems and regulations that better characterize risk to ensure our food supply remains safe without compromising our health