Great Lakes' levels for Michigan and Huron have peaked for 2017

Seasonal decline begins - lakes will lose more than a trillion gallons of water.

Where did summer 2017 go?  Meteorological fall actually began on Sept. 1, 2017, while the autumnal equinox, based on the more commonly understood astronomical season, comes on Sept. 22, 2017, marking the official end of summer. If you got out to the Great Lakes' shorelines this summer, you undoubtedly noticed higher lake levels and perhaps smaller beaches. People are still dealing with significant impacts from the record highs experienced in Lake Ontario which began in April/May 2017. Thankfully, Lake Ontario levels have fallen significantly since then and are about at the seasonal high level from 2016. The most recent weekly levels forecast from the U.S. Army Corps of Engineers shows Lake Ontario is predicted to drop another 11 inches from current levels by Oct. 1, 2017.

On Lake Michigan and Lake Huron (hydrologically one Great Lake due to the deep connection at the Straits of Mackinac), lake levels seemed to have peaked in July/August and are now following a typical seasonal decline into the winter months. The average level was almost exactly the same (a couple hundredth’s of an inch is the difference) in both July and August. While we’ve had several intermittent years historically where the levels do go up in September and October (see the NOAA Great Lakes Water Levels Dashboard), the usual pattern is lower in September, lower again in October and so forth down into January/February where it can start a seasonal increase. 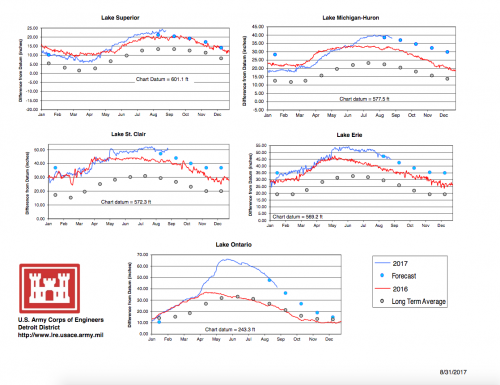 The current forecast is for Lake Michigan-Huron to decline by 2 inches by about Oct. 1, 2017.8-31-17_DailyLevelsEnglish.pdf

The current levels in Superior, Michigan-Huron and Erie are not at record heights (record highs were recorded in fall 1986 in particular) but a lot of adjustments have had to be made in docks, beach areas and things such as pathways to the water for people with disabilities. Newspaper articles, such as in the Holland, Michigan Sentinel (Aug. 13, 2017), have discussed beach erosion, sidewalk flooding during wind events, and changing beach grass areas.

Another key issue has been the moving of beach sand, particularly in the southern end of Lake Michigan. The U.S. Army Corps of Engineers Detroit District, the Michigan Coastal Zone Management Program, Michigan Sea Grant Extension, Michigan USGS Water Science Center, academic and other groups have recently met to discuss issues of coastal sediment management. The Corps of Engineers received some funding from the Regional Sediment Management program to convene a group of coastal scientists and engineers to meet quarterly and discuss issues that are important to the shorelines of Michigan. The informal group name, the Michigan Coastal Roundtable, met for the first time in August 2017, to foster understanding and solving some of the chronic and emerging coastal problems in Michigan. Some of the topics at the Roundtable included:

If you know of key shoreline issues in addition to these, please contact Mark Breederland, MSU Extension Sea Grant or one of the agencies above so we can continue to discuss living with the ever-changing dynamic coastlines of the Great Lakes.