How much ice should we expect to see on the Great Lakes this winter?

Last really big ice cover winter for the Great Lakes was 2013-2014 where over 92% of the Lakes were frozen over.

As noted earlier this summer, the 2016 water temperatures of the Great Lakes were significantly warmer than average. Data compiled from NOAA’s Great Lakes Coastal Forecasting System allows an easy comparison by date for the past 2 years and it is interesting to view now that we’re at the beginning of the winter season. For instance, on November 22, 2016, the average Lake Michigan whole volume temperature was 50.9 degrees Fahrenheit while the same date in 2015 it was 47.8 and in 2014 it was 45.5.

Our last really big ice cover winter for the Great Lakes was 2013-2014 where over 92 percent of the Lakes were frozen over. The graph shows maximum cover from 1973-2016 as recorded at NOAA’s Great Lakes Environmental Research Lab where they have been monitoring ice cover since the early 1970s.

So, during a really good ice winter, like that of 2013-14, how early did ice start forming in the Great Lakes? As early as Thanksgiving, 2013, (November 28)  ice had already started forming and by December 31, 2013, there was significant cover.  Images from the GLERL Digital Ice database show the ice cover on those dates. 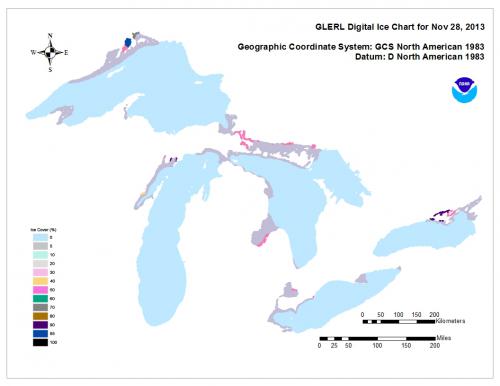 An interesting recent scientific publication by Titze & Austin (Journal of Great Lakes Research, Vol. 42, Issue 5, Oct. 2016) discusses some observations during the strong ice winter of 2013-14 on Lake Superior. So much of the knowledge of ice cover is based from remotely sensed data; this research adds actual observations of ice cover from three sub-surface moorings on the lakebed of Lake Superior. The sensors could observe the ice above all winter long. One finding that was noted is even during a record-high ice cover on Lake Superior of 2013-2014 the majority of the ice in open water areas of the lake was free-drifting and moving.

What are some possible implications of water temperature, ice and other factors in the Great Lakes during this winter of 2016/2017? Read Part 2 of this article to find out. 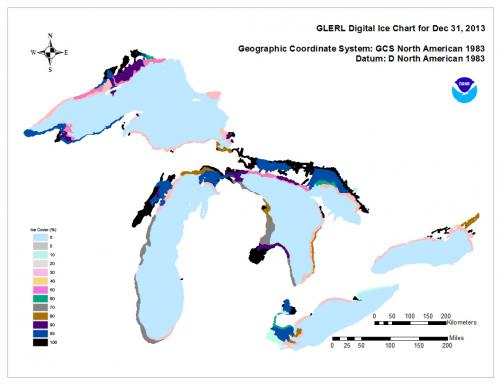