In the race of life, better an adaptable tortoise than a fit hare

In the March 18 edition of Science, Richard Lenski and colleagues show that more adaptable bacteria oriented toward long-term improvement prevailed over competitors that held a short-term advantage. 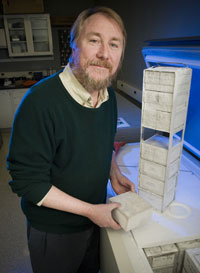 In the survival of the fittest, it’s sometimes better to be an adaptable tortoise than a fitness-oriented hare, according to Michigan State University (MSU) AgBioResearch scientist Richard Lenski.

In the March 18 edition of Science, Lenski, MSU Hannah distinguished professor of microbiology and molecular genetics, and colleagues show that more adaptable bacteria oriented toward long-term improvement prevailed over competitors that held a short-term advantage.

The discovery that the less fit organisms overtook their in-shape counterparts surprised the researchers at first, but it turns out to work something like a game of chess.

“In games it makes sense to sacrifice some pieces for an eventual winning move,” said Lenski, co-principal investigator of BEACON, MSU’s National Science Foundation-funded Science and Technology Center. “The eventual winners were able to overcome their short-term disadvantage over the course of several evolutionary moves by producing more beneficial mutations.”

Lenski is recognized as a leading evolutionary experimentalist, recording evolutionary change over 52,000 generations of bacteria grown during nearly 25 years. He and his team recently revived a frozen population of E. coli and compared the fitness and ultimate fates of four clones representing two genetically distinct lineages. One lineage eventually took over the population, even though it had significantly lower competitive fitness than the other lineage that later went extinct.

By replaying evolution over and over with the clones, the researchers showed that the eventual winners likely prevailed because they had greater potential for further adaptation.

“In essence, the eventual loser lineage seems to have made a mutational move that gave it a short-term fitness advantage but closed off certain routes for later improvement,” Lenski said. “And the dead-end strategy allowed the eventual winners to catch up and eventually surpass the eventual losers. So, yes, sometimes the tortoise really does beat the hare.”

Though Darwin’s theory of natural selection has been confirmed by a great deal of other research, it has never before been observed directly for so many generations and in such detail as Lenski’s long-term experiment has afforded.

In addition to AgBioResearch, Lenski’s research is supported by the National Science Foundation and the Defense Advanced Research Projects Agency.