Landscape change leads to increased insecticide use in the Midwest 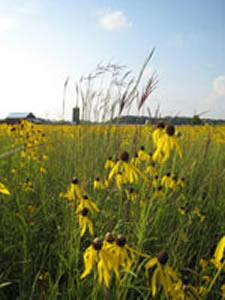 MSU AgBioResearch entomologist and landscape ecologist Doug Landis and other researchers affiliated with the Great Lakes Bioenergy Research Center (GLBRC) have found that agricultural landscapes of the Midwest have increasing amounts of cropland and decreasing amounts of non-crop habitat. This “landscape simplification” is associated with increased pest abundance and increased insecticide use.  Each year, landscape simplification results in application of insecticides to an extra 3.5 million acres, with direct costs between $34 million and $104 million.

Though the relationship between landscape simplification, crop pest pressure and insecticide use has been suggested before, it has not been well supported by research until now. The study was published by GLBRC, a partnership between MSU and the University of Wisconsin, in the Proceedings of the National Academy of Sciences. It was a collaboration between Landis and MSU entomology postdoc Ben Werling, and Tim Meehan and Claudio Gratton of the University of Wisconsin.

Although simplification of agricultural landscapes is likely to continue, the research suggests that the planting of perennial bioenergy crops – such as switchgrass and mixed prairie – can offset some negative effects, Landis said.

"Perennial crops provide year-round habitat for beneficial insects, birds and other wildlife, and are critical for buffering streams and rivers from soil erosion and preventing nutrient and pesticide pollution," he said.

"When you replace natural habitat with cropland, you tend to get more crop pest problems," said Meehan, a University of Wisconsin entomologist.  "Two things drive this pattern; as you remove natural habitats, you remove habitat for beneficial predatory insects, and when you create more cropland, you make a bigger target for pests – giving them what they need to survive and multiply."

The GLBRC is one of three U.S. Department of Energy Bioenergy Research Centers funded to make transformational breakthroughs that will form the foundation of new cellulosic biofuels technology.