Updated from an original article written by By Ben Belton.

Fish farms (aquaculture) are helping to fight hunger. An article by B. Belton (FSP Myanmar team) in The Conversation 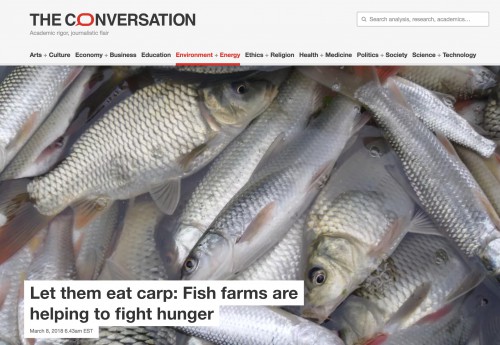 EXCERPTS
The vast majority of farmed fish is consumed in the same developing countries where it is produced, and is widely accessible to poorer consumers in these markets. Most of it comes from a dynamic new class of small- and medium-scale commercial farms, the existence of which is rarely recognized. To understand the potential of aquaculture to feed the world, researchers and consumers need to appreciate how dynamic this industry is. ....

Throughout human history most of the fish people eat has been captured from oceans, rivers and lakes. But the total quantity of fish harvested from these sources peaked in the mid-1990s due to overfishing and environmental degradation. Demand for seafood has continued to increase since this time, as urbanization and average incomes have risen globally. Aquaculture is filling the gap. ....

The expansion of fish farming has been good for the poor. Low-income households in the countries that we studied would eat less fish of any kind today, wild or farmed, were it not for the growth of aquaculture. ...

This transformation has not yet taken hold in many developing countries, particularly in Africa, where access to inexpensive fish could greatly improve food security. By learning from the example of nations where farmed fish supply has boomed, governments and aid organizations can make better targeted investments in infrastructure, institutions, policies and technologies to expand the impact of aquaculture’s quiet revolution.