Waterfowl carcasses in Northwest Michigan have raised concerns for significant waterbird loss due to avian botulism. Citizens are encouraged to report sick or dead waterbirds as specimen collection continues. 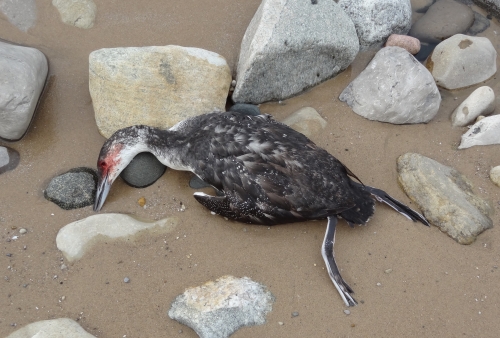 Reports of waterfowl carcasses washing ashore in Leelanau and Benzie Counties has increased significantly over the past week with at least 100 loons discovered along with smaller numbers of grebes, white-winged scoters, long-tailed ducks, double-crested cormorants and mergansers. Michigan Sea Grant Extension collected grebe and cormorant specimens in late September from Leland Township, Michigan that  were confirmed positive for Type E botulism by the Michigan DNR Wildlife Disease Lab .

Botulism is a neuromuscular disease caused by the bacterium Clostridium botulinum. In the Great Lakes, botulism spores (the resting stage of the bacteria) are abundant in anaerobic habitats, such as soils, and aquatic sediments of many lakes. When the correct environmental factors are present, the spores germinate and begin vegetative growth of the toxin-producing bacterial cells. The toxin probably then is passed through quagga mussels and into round goby fish, which can become paralyzed and are easily consumed by loons and other waterfowl.

In November 2006 and 2007, an estimated 2,900 waterbirds and 7,500 waterbirds, respectively, died in northern Lake Michigan. The birds were poisoned by eating fish that carried the toxin; however, in recent years, there were very low botulism kills. During the high kill years, most birds were impacted from mid-October through mid-November, so we may be in the peak of the impact season as the fall migration continues.