This is the sixth weekly report of the Michigan State University Extension spotted wing Drosophila (SWD) statewide monitoring program for 2014. Our network of traps across more than 100 sites was checked during the week of July 24 and shows continued moderate activity of this pest in southwest counties, low activity in west central and northwest counties, and new activity in southeast counties. There was a total of 218 male and 197 female SWD trapped from the following Michigan counties: Berrien, near blueberries, raspberries, tart cherries, peaches and strawberries; Van Buren, near plums, tart cherries, strawberries, blueberries and grapes; Allegan, near blueberries and tart cherries; Ottawa, near blueberries; Kalamazoo, near black raspberries; Kent, near raspberries; Montcalm, near apples; Oceana, near tart cherries; Leelanau, near tart and sweet cherries; Benzie, near tart cherries; Ingham, near grapes; Livingston, near raspberries; and Genesee, near grapes. The proximity to a particular crop indicates the location of the trap, so interpret this long list of nearby crops to mean that SWD is active across the fruit-growing regions of the state.

The traps in the network catching SWD increased from 30 to 40 percent this week, with new reports coming out of southeast Michigan. Similar to last week, the average number of SWD per trap this week was four across the entire network, but more than eight SWD per trap were found on average in southwest Michigan. Again, traps near fencerows or woodlots containing wild berry-producing shrubs caught higher numbers of SWD. Where SWD numbers are still low, growers should continue to be on alert for this pest as their susceptible fruit crops start or continue to ripen. 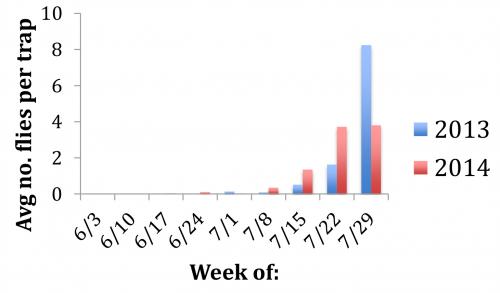 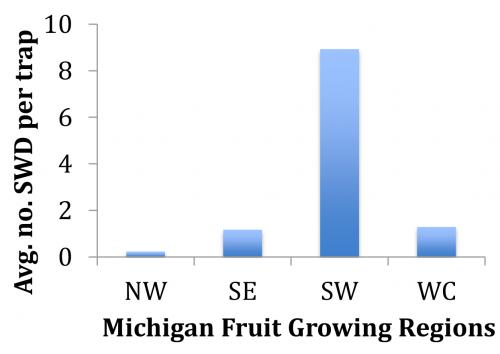 Sampling of fruit over the past week revealed low levels of infestation of summer raspberry fruit, particularly in fields not being treated for this pest. In blueberries, all conventionally-managed commercial fields sampled for SWD had no larval infestation. Unsprayed fields with ripe fruit are now showing infestation, showing up as younger larvae in a low percentage (2-10 percent) of the berries. This highlights the need for protection of ripe berries over the coming weeks as the SWD population grows.

SWD can only infest berries when they are ripening or ripe, so the focus of SWD monitoring and management efforts should be in susceptible fruit that should be treated only if SWD are detected to minimize the risk of developing pesticide-resistant populations of SWD. In addition to the use of monitoring traps to detect the adult flies, a simple salt solution of 1 cup of salt per gallon of water can be used to assess fruit for larval infestation.