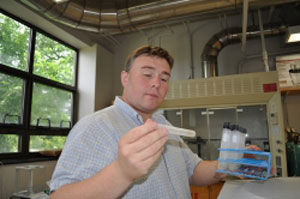 Lock, assistant professor and Extension specialist in the MSU Department of Animal Science, was presented with the 2011 Cargill Young Scientist Award during the ADSA annual meeting this summer. The award recognizes outstanding research by young dairy production scientists during the first 10 years of their professional careers. A recipient must be 39 years old or younger and have completed a Ph.D. within the previous 10 years.

“I am very honored to receive this award,” Lock said. “Although I was the recipient of this honor, it is really in recognition of all the hard work that my lab group and collaborators have invested in the various projects that I have been involved with.”

Lock was born and raised on his family’s dairy farm in southwestern England. He holds degrees from the University of Nottingham, where he also served as a research associate before moving to Cornell University and the University of Vermont. He joined the faculty at MSU in June 2009. Lock is the co-author of more than 150 scientific articles and abstracts and has given lectures in 11 countries. His research in fatty acid digestion and metabolism has direct applications in dairy production and implications for milk fat effects on human health.

“I have been very fortunate and consider it a privilege to be able to work where and with whom I do,” Lock said. “MSU has a strong tradition of excellence in agricultural research and Extension, and I continue to be excited by the prospects and opportunities that our department and the university offers.”

Lock’s current research focuses on the effect of diet on the production of bioactive fatty acids in the cow’s rumen and their subsequent impact on milk fat synthesis in the mammary gland. He and his research team are applying this knowledge to improve the ability to troubleshoot on-farm issues related to low milk fat tests. Lock’s research relating to human nutrition and health has focused on the role of milk fat-derived bioactive fatty acids, and milk fat in general, on atherosclerosis and breast cancer disease risk.