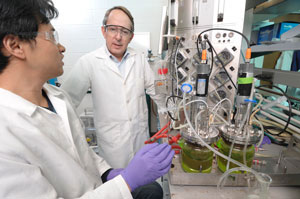 Michigan State University (MSU) AgBioResearch scientist Bruce Dale was recently ranked 22th and was the top-ranked academic on BioFuels Digest's2012-13 list of the Top 100 People in Bioenergy. The list was determined by votes from readers of the magazine and the magazine’s editorial board.

This marks the third year Dale, a professor in the MSU Department of Chemical Engineering and Materials Science, has received recognition in the top 100.

"Having worked my entire career to develop sustainable biofuels, I am honored to be included in this group of very fine people," said Dale. "In particular, I appreciate the privilege of working here at Michigan State University, where we have such a strong commitment to the bioeconomy. There is also tremendous pride in being affiliated with MSU AgBioResearch."

Dale is recognized for, among many other accomplishments, his pioneering work in cellulosic ethanol and his ongoing work in biofuels research.

He is working with MBI International, an industrial biotechnology company located in Lansing, Mich., to scale up and commercialize a process he invented that helps convert cellulosic biomass (grasses, straws, woody materials) into enhanced animal feeds and biofuels.  MBI has obtained a $4.3 million grant from the U.S. Department of Energy, complemented by another $1 million from the MSU Foundation, to build the first large-scale plant to use Dale’s process.

"Bruce is an outstanding scientist, who has shown tremendous leadership in the biofuels arena,” said Steve Pueppke, AgBioResearch director and MSU associate vice president for research and graduate studies. “AgBioResearch is proud to work with Bruce and others like him doing such high-caliber work.”