Alexandra Kravchenko is among a team of 140 researchers at 10 Midwestern universities working on the Climate and Corn-Based Cropping Systems Coordinated Agricultural Project (CSCAP), funded by the U.S. Department of Agriculture. 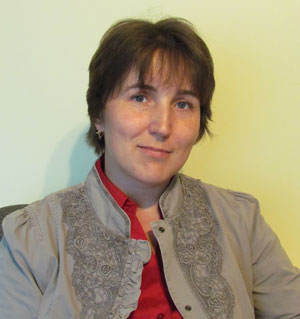 Alexandra Kravchenko, a Michigan State University (MSU) AgBioResearchscientist, is among a team of 140 researchers at 10 Midwestern universities working on the Climate and Corn-Based Cropping Systems Coordinated Agricultural Project (CSCAP), funded by the U.S. Department of Agriculture.

Kravchenko – who is also an associate professor in the MSU Department of Crop, Soil and Microbial Sciences – and several other researchers at MSU are focused on explaining the mechanisms by which cover crops increase carbon sequestration, to what extent that affects greenhouse gas emissions, and how cover crops influence corn yields and soil nitrates. She is particularly interested in how variable field topography affects the benefits of cover cropping.

“I want to know what will happen across diverse terrains so the results of our research will be more relevant for real-life farmers who have to deal with variable terrains in their fields,” she said.

Two new MSU experimental sites with diverse topography have been established to use for the research studies. One site is at an MSU farm in Mason, Mich.; the other is at the Kellogg Biological Station, one of 13 AgBioResearch research facilities in the state.

“I was hoping we were in better shape, that things were not as bad as they are,” Kravchenko said. “But that makes me feel that our work is more important than ever.”

Members of the MSU research team are Bruno Basso, an associate professor in the MSU Department of Geological Sciences, who works on modeling for the project; Martin Chilvers, a visiting assistant professor in the MSU Department of Plant Pathology, who is involved in the integrated pest management component of the project; and Marilyn Thelen, who represents MSU in the Extension component of the project.

Their work is related to research at nine other universities in the Midwest, where scientists are developing farm management practices aimed at building resiliency into corn-based cropping systems in response to the effects of a changing climate, such as more frequent and prolonged periods of drought.  Kravchenko will work with other scientists collecting similar data on other experimental sites in the Midwest and utilizing the information to create predictive models.

MSU AgBioResearch engages in innovative, leading-edge research that combines scientific expertise with practical experience to generate economic prosperity, sustain natural resources, and enhances the quality of life in Michigan, the nation and the world. It encompasses the work of more than 300 scientists in six MSU colleges – Agriculture and Natural Resources, Communication Arts and Sciences, Engineering, Natural Science, Social Science and Veterinary Medicine – and has a network of 13 research centers across the state.

Photo 2:  A farm in Mason, Michigan is one of two new experimental sites established by Michigan State University with diverse topography to use for the research.