The Michigan Department of Natural Resources is exploring the feasibility of conducting a large-scale lake whitefish-sea lamprey interaction study to determine whitefish survivability from lamprey attack.

At the recent Michigan Fish Producers Association Annual Conference in Traverse City, Michigan Sea Grant Extension conducted a daylong educational workshop that included a presentation by Michigan Department of Natural Resources fisheries biologist, David Carofinno, who discussed research on lake whitefish and sea lamprey interactions. Lake whitefish is an important commercial fish in the Great Lakes and, like lake trout, they are impacted by sea lamprey attack. A great deal of research has been conducted on sea lamprey attack on lake trout, but this research has been lacking for lake whitefish.

It is believed that lake whitefish may be an important food source for newly transformed sea lamprey, before they shift their feeding on higher-level predators, such as lake trout, later in life. Sea lamprey marking rates in northern Lake Huron have been found to be high. Sea lamprey wounding rates on lake whitefish are collected through 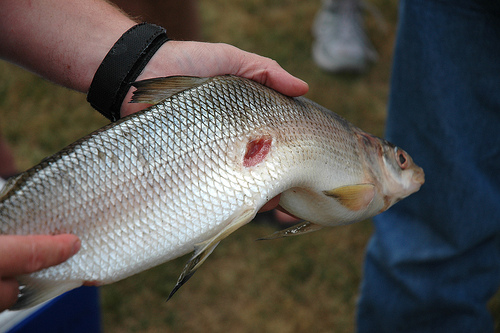 commercial fishery monitoring and fishery-independent surveys throughout the year. The proportionality of wounding rates to actual mortality rates depends on the probability of the host surviving an attack. Although widely studied for lake trout, the probability that a lake whitefish will survive a sea lamprey attack has only been addressed in a single study.

One obstacle to performing this necessary research is the difficulty of keeping wild lake whitefish alive in captivity. This may be one reason why research similar to previously conducted studies with lake trout has not been done with lake whitefish. Lake whitefish can be reared to adult stage from eggs in a hatchery setting, but the cost, space required, and duration of the project may be prohibitive.

The goal of this research project is to determine if it is feasible to conduct a larger-scale lake whitefish-sea lamprey interaction study and under what conditions study specimens should be transferred. Data from this research is needed to support or refute the hypothesis that the probability of a lake whitefish surviving a sea lamprey attack is 25 percent. It is also hoped to determine if survivability depends on size of the lake whitefish or sea lamprey, month of attack, and the rate of wound healing. A larger project could also examine duration of attacks on lake whitefish and possible physiological mechanisms of mortality. This pilot project will help to determine the best location and methods for conducting future interaction trials that would address these relevant questions.

For additional information on this project, contact David Caroffino at 231-547-2914 extension 232.