Pinkeye in cattle: Part One

How to determine if your cattle have a pinkeye infection.

Pinkeye, also known as infectious bovine keratoconjunctivitis (IBK), is one of the most common diseases of beef cattle. It is a highly contagious disease, causing inflammation of the cornea (the clear outer layer) and conjunctiva (the pink membrane lining the eyelids) of the eye. It will also cause ulceration, which looks like a hole or depression in the cornea.

The incidence of pinkeye increases in spring, peaks in the summer and decreases in the fall. Pinkeye results in mild to severe disease, blindness if left untreated and can cause significant reductions in performance and cattle value.

The primary infectious agent for pinkeye is the bacterium Moraxella bovis. This bacterium is found in the eyes of many recovered and apparently normal cattle. Pinkeye is a multifactor disease, which means there are many factors that predispose and contribute to the development of the disease.

Other sources of eye irritation are tall grasses rubbing the eyes as cattle walk and graze, dust and foreign objects in the eye. ultraviolet (UV) sunlight also increases the chances of disease development. Breeds lacking pigment on their eyelids (Herefords, Hereford crosses, Charolais, and some Holsteins) are more susceptible to pinkeye because of their increased sensitivity to sunlight and a decreased immune response in the eye.

As with many diseases, the disease outcomes can be influenced by nutritional imbalances, such as deficiencies of protein, energy, vitamins (especially vitamin A if the forage is lower quality) and minerals (especially copper and selenium). The presence of other organisms such as the infectious bovine rhinotracheitis (IBR) virus, mycoplasma, chlamydia and Branhemella ovis will increase the incidence and severity of disease.

There are three stages of pinkeye. The disease may resolve at any of these stages though without treatment the most severe cases will progress through all three stages.

Stage I: Cattle have excessive tearing and increased sensitivity to light. They will blink frequently and there is redness along the eyelids. Cattle will often seek shade, which will decrease their grazing time. Pain associated with pinkeye also decreases their feed intake. Stage I will progress to a small ulcer in the center of the cornea which appears as a small white spot. The cornea develops a slightly cloudy grey appearance due to inflammation. One or both eyes may be affected. 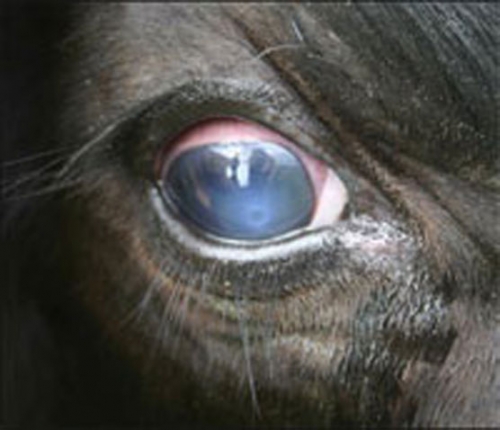 Stage II: The clinical signs described in Stage I continue, but the ulcer spreads across the cornea. As more inflammation occurs, the cornea becomes increasingly cloudy. At this point, some of the dark color of the iris can still be seen. Blood vessels from the outside portion of the cornea begin to grow across the cornea to help with healing. These blood vessels make the cornea appear pink, which is how the disease received its name. 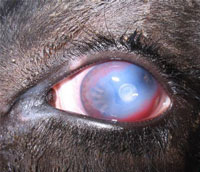 Stage III: The ulcer covers most of the cornea and the inflammation continues to spread into the inner parts of the eye. When this occurs, the inside of the eye fills with fibrin, which is a pus-like substance that gives the eye a yellow appearance versus the typical brown appearance. 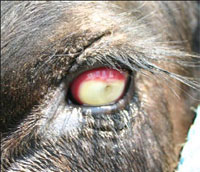 The Five Freedoms: A history lesson in animal care and welfare