There is much to learn about crop rotation, and Michigan State University (MSU) researchers at the Living Field Laboratory (LFL) are developing the next phase of knowledge about the ancient practice

Practiced on farms of the Middle East since at least 6,000 B.C., crop rotation is a key element of agriculture. Producers have long known that alternating crops in their fields, rather than growing the same crop year after year, improves their farms dramatically. Benefits range from rejuvenating soil nutrients to controlling pests and preventing soil erosion, all of which add up to improved yields and better, healthier crops. There is still more to learn about crop rotation, and Michigan State University (MSU) researchers at the Living Field Laboratory (LFL) are developing the next phase of knowledge about the ancient practice.

LFL was established in 1993 at the Kellogg Biological Station near Gull Lake under the direction of Richard Harwood, who was then the C.S. Mott Sustainable Agriculture Chair at MSU. The project was designed as a long-term study of the potential benefi s of including cover crops in the rotation cycle of corn. The first crops were planted at the site in 1994 and crops planted there since have been diligently observed for the past 20 years. MSU AgBioResearch scientist Sieg Snapp took over LFL when Harwood retired in 2006.

“I think what makes this project so effective is that it’s based on farmers’ wisdom,” Snapp said. “When I go through his legacy, all the material Dr. Harwood has given me, it’s not just this one experiment — it’s all these relationships with farmers. He took this to the farmers and sought their input, and that’s kept our work very applicable to the industry.”

The LFL compared various types of crop rotation and management. Harwood and Snapp’s research teams compared the crops and soil of the LFL plots, profi ing the soil three feet down and studying its biological composition and carbon levels. Though the data is still being analyzed, the benefi s of crop rotation are apparent.

“Harwood was really at the forefront of this,” Snapp said. “He realized there were all these hidden benefi s of rotation that had been lost in the rush to grow large quantities of corn.”

Crop rotation helps increase the amount of organic matter in the soil. This improves the soil’s ability to filter and retain water, which allows it to remain productive during periods of drought. It also improves the soil’s ability to release nitrogen effi    ntly, reducing reliance on fertilizers. Though some improvement can be made by adding large amounts of fertilizer such as dairy manure, the approach is rarely practical outside of academic experimentation.

“A lot of similar projects used a lot of manure to get big yield improvements, but we’re trying to work on a more practical level,” Snapp said. “As a researcher, you can afford tons of manure, but we tried to use amounts of materials that would be available to farmers.”

The research showed that rotating crops and using reasonable levels of fertilizer could bring about beneficial changes in soil composition. Most improvements were not immediately apparent, however. 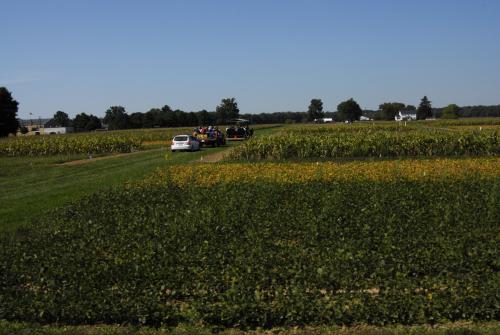 “A lot of the soil organic matter processes take at least five or 10 years to come to fruition,” Snapp explained. “To see how much the soil can be improved, we needed long-term data.”

After 20 years of study, their patience was rewarded. The researchers observed significant improvements in both the soil’s organic matter and nitrogen efficiency, reaching a new peak level of productivity. Snapp determined that the experiment was over when the soil would not improve beyond that point. It had reached a new plateau but was now operating on a much healthier, more productive level than ever before.

“One of the big lessons we learned is that once you build your soil up, you can rely on that improvement,” Snapp said. “A lot of times, when farmers build their soil up, they keep building it up. We found that you don’t have to do that. More isn’t always better, in this case.”

The LFL is embedded in Michigan agriculture, but its results hold importance for farming around the world. Harwood’s team published a document that synthesized their initial findings to help growers apply their knowledge in the field. Snapp actually first saw the document while working in Africa years before coming to MSU.

“I thought, if they’re doing Extension so well in Michigan, I want to be there and be a part of that,” she said. “Harwood took very complicated concepts and made them relevant and understandable to farmers — he synthesized it into a teachable form.”

With field trials at the LFL complete, Snapp will synthesize the findings into an updated edition of that document, providing farmers around Michigan and the world with the latest tools to improve soil health. By keeping the focus on farmers’ concerns, the long-term research at the LFL stands to have an even longer term impact on agriculture.

“We showed that using crop rotation and dairy manure, these very practical things, can make a significant improvement,” Snapp said. “A lot of people do cover crop work, but MSU has distinguished itself by drawing practical lessons based on field science.”