Rearing nematodes in wax worms may be a cheaper source to provide fungus gnat and shore fly control in the greenhouse.

Species of entomopathogenic nematodes, or round worms, have been shown to be beneficial for controlling many types of greenhouse pests, including fungus gnats, shore flies, and some control of western flower thrips. In the nursery, nematodes can provide some control of root weevils, wireworms, cutworms, and spotty control of Japanese beetle grubs. In the same manner that these nematodes invade their soil-borne hosts, nematodes can be bred in Galleria mellonella wax worms. Rearing them yourself can save you money and prevent repeat ordering with your supplier.

What you will need:

Numerous species of entomopathogenic nematodes can be reared with Galleria wax worms, including Heterorhabditis bacteriophora, Steinernema carpocapsae, Steinernema feltiae and Steinernema riobrave. First, place five live wax worms in a Petri dish with approximately 100 live nematodes, or 20 nematodes per host worm, with a few drops (0.5 mL) of de-ionized or boiled tap water. The juvenile nematodes will enter and infect insects through their natural openings. Endosymbiotic bacteria carried within the nematodes are released after they penetrate their hosts. Toxins produced by the bacteria cause blood poisoning of the insects usually resulting in their death within 72 hours. The nematodes consume the bacteria and complete one to three generations before they emerge from the dead insects seeking other hosts.

Store Petri dishes for six days in a dark place at room temperature. After six days, check worms for infection. The cadavers of the wax worms successfully infected will appear beige to dark red, depending on the species of nematode used for infection (Photos 1-2). 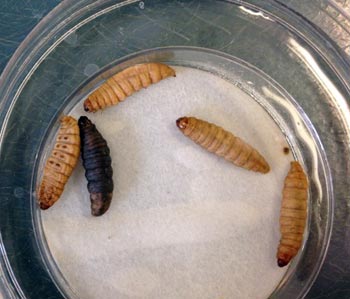 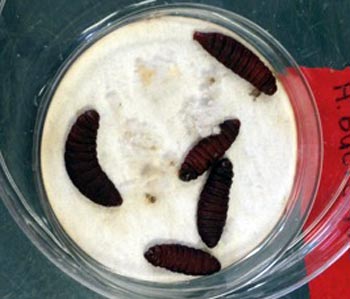 Upon successful infection, place Petri dish containing nematodes, worms and filter paper within another larger Petri dish. Fill the outer Petri dish halfway with de-ionized or boiled tap water and cover with an opaque lid for three weeks. Infective juvenile nematodes will emerge from the host and swim into the water within one to three weeks. Verify that the nematodes are still alive – wiggling and swimming – under a dissecting microscope. Dead nematodes will be straight and still.

Add solution that contains nematodes to a live culture flask, a shallow dish or an aquarium with an air bubbler. Nematodes can be stored in darkness in a container that provides a sufficient amount of air to nematodes by using shallow containers or an air bubbler for approximately one month.

Michigan State University Extension recommends that a minimum of a half of a million nematodes be applied to every square meter in the greenhouse to provide fungus gnat and shore fly larvae control. In the nursery or field, concentrations should be at least double of that in the greenhouse. A mixture of species of nematodes may prove to be beneficial since nematodes of different species are more effective on some greenhouse pests than others. S. feltiae infects fungus gnat larvae while S. carpocapsae infects shore fly larvae.

Growing lavender in Michigan: Advice for a purple garden