New technology pioneered by MSU geneticists Juan Steibel, Ron Bates and Cathy Ernst will allow breeders to better understand the genetics of their animals and increase the efficiency of their breeding programs.

Worldwide, pork is the most widely consumed meat; in the United States, it ranks as the third most popular.* In Michigan alone, the pork industry is worth over $362 million, according to the 2012 U.S. Census of Agriculture. Throughout a 300-year history in North America, pork producers have continually worked to improve their ability to meet this high global demand through improved feeding, housing, health and conventional breeding methods.

First domesticated more than 10,000 years ago, pigs are receiving a breeding kick start thanks in part to research to develop low-cost tools to analyze the animals’ genomes. New technology pioneered by Michigan State University (MSU) AgBioResearch geneticists Juan Steibel, Ron Bates and Cathy Ernst will allow breeders to better understand the genetics of their animals and increase the efficiency of their breeding programs.

For the past six years, Steibel — an associate professor in the MSU departments of Animal Science and Fisheries and Wildlife — and his collaborators have been developing a cost- effective tool to analyze specific elements, called single-nucleotide polymorphisms (SNPs), within a pig’s genetic code. They insert a sample of genetic material, such as blood or hair, into the device, called a SNP chip. Probes then target each SNP with fluorescence technology. The probes glow different colors, denoting which SNPs are present, so the user can fully characterize an individual pig’s entire genotype.

“It works a lot like something you’d see on a crime scene investigation [television] show,” Steibel explained. “You have to be extremely careful with the sample to ensure DNA quality.”

Applying the SNP chip to an entire population of pigs, such as a farm herd, enables breeders to predict the genetic value — the number of desirable traits — of the pigs and dramatically increase breeding efficiency.

“The SNP chip makes it much cheaper and easier for breeders and producers to do a genome analysis of their pigs,” Steibel said. “They will be able to breed better, more productive pigs, and do it faster.”

Most mammalian genomes contain between 5 million and 10 million SNPs. Many of them are redundant, however, carrying practically the same genetic information. This means that SNP chips need to target only a relative handful of SNPs to acquire the same level of information. The trick is finding the right ones. 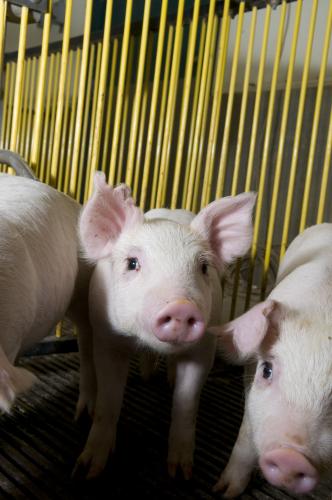 Most SNP chips are high-density, meaning they target more than 50,000 SNPs to produce the full pig genome. Though effective, these devices are often too expensive for breeders to apply to large numbers of animals. This limits the size of the dataset and, therefore, its usefulness in creating a breeding strategy. Steibel hopes to change that by refining the technology and producing a low-density SNP chip that can yield the same quality of information at a significantly reduced cost.

“With the high-density chips, you can do a genotype for an individual pig, but for that to be useful on a commercial scale, it has to be done for thousands,” Steibel said. “Using a low-density chip, we could more than double the number of pigs genotyped. The catch is to design a low-density chip that has minimal loss of information.”

After years of extensive testing, Steibel’s team discovered a series of 10,000 SNPs that predict the remaining 40,000.

“It was a simple concept but one that was computationally very demanding,” Steibel explained. “Imagine a set of 50,000 SNPs, each one a two-letter combination, and applied to 10,000 pigs. You end up with a big matrix of data that we have to analyze and try to make sense of, looking for patterns of inheritance. We had to do this thousands of times to find which were the best SNPs to keep as predictors of the rest.”

Making this technology widely available will improve the ability of American pork producers to take advantage of the latest developments in genomic breeding. By using the SNP chip to select the most promising young animals, industry producers will be able to accelerate the genetic progress of their herds and produce better quality animals in much less time.

“We’ll start to see this in the next four or five years,” Steibel said. “In the longer term, I think it will open the door to work on genetic traits that are currently difficult to improve, such as disease resistance and behavior.”

The next phase of Steibel’s work involves using the chip to predict the genetic value of pigs to be used in breeding by the National Swine Registry.

“The National Swine Registry doesn’t produce the pigs we eat, but they produce some of the parents of the pigs we eat,” Steibel said. “It’s of the greatest importance to find quality animals there because their characteristics will be inherited by their progeny and, ultimately, affect what we eat down the line.”