Research maps out trade-offs between deer and timber

In many places, the sugar maple saplings that should be thriving following harvesting are instead ending up as a deer buffet, discovers AgBioResearch forest ecologist, Michael Walters, and researchers. 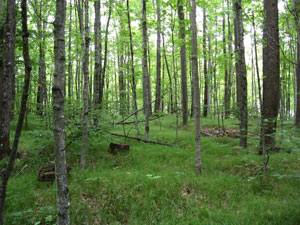 Since the 1950s, sustainability in northern hardwood forests has been achieved by chopping down trees in small clumps to make room for new ones to spring up naturally. Early experiments with single-tree and group selection logging found that desirable species such as sugar maples did a great job of regenerating in the sunny, rain-drenched harvest gaps – theoretically eliminating the need to replant.

But something has changed.

In a sweeping study of a huge swath of Michigan’s Upper Peninsula, AgBioResearch forest ecologist Michael Walters and other MSU researchers document that, in many places, the sugar maple saplings that should be thriving following harvesting are instead ending up as a deer buffet. This means the hardwood forests are not regenerating.

The results of the study, “Gap-, stand- and landscape-scale factors contribute to poor sugar maple regeneration after timber harvest,” were published in the May online edition of Forest Ecology and Management. The research was funded by the U.S. Department of Agriculture and the Michigan Department of Natural Resources.

“Our goal was to determine what factors are affecting the regeneration of sugar maple,” said Walters, an MSU associate professor of forestry. “Management paradigms for deer and northern hardwood forests have resulted not only in regeneration failure where deer populations are especially high but also in low tree regeneration diversity where they are not.”

Forest conservation is a persistent push and pull between maintaining crops of hardwoods -- especially sugar maple -- for the timber industry, and herds of deer for hunters. The interplay between these conflicting resource uses can also affect bird habitat. So it came as no surprise that, when the researchers -- Walters; Megan Matonis, a member of the research team who recently received a master’s degree in forestry while a member of the Center for Systems Integration and Sustainability at MSU; and James Millington, former post-doctoral researcher and now a Leverhulme Early Career Fellow at King's College in London -- ventured into the U.P. forests for the study, they were peppered with questions by both hunters and loggers.

“It’s amazing how differently these two groups generally view the situation,” said Matonis, now a doctoral student in forest science at Colorado State University and an intern with the U.S. Forest Service in Washington, D.C. “Some hunters feel there aren’t enough deer in the forests, whereas ‘save a tree, kill a deer’ is the sentiment of many loggers.”

The study area stretches over some 3,000 square miles of public and private land from Crystal Falls to the west, east and south to Escanaba and north of Marquette. For two years, the group examined the harvest gaps left in forests when hardwoods are cut down, studying the amount of light in gaps of various sizes, competition from other plants on the forest floor, potential seed supply, and the relative richness and wetness of the soil.

What they found is that in the north, where heavy snows push deer populations south in search of food during the winter, sugar maple saplings generally are thriving in the harvested areas. Yet in the southern portion of the study area, there were areas where no saplings survive. Saplings are a tasty snack for hungry deer.

Although munching by deer seems to be the main cause of low sapling densities in the south, other factors also make it a tough life for saplings. Low light levels in small gaps and competition from other plants also play roles in poor regeneration.  A grass like plant called sedge appears to out compete tree saplings in many forests following harvests. Previous research conducted by Walters in the U.P. suggests that deer can help sedge take over by removing saplings and other plants that they find more appetizing.

“The results of this study fed into the development of a computer model designed to help balance those often-competing uses of the forests,” Walters said. “These results and results from other projects by our research group are being communicated to forest managers and have resulted in the consideration of alternative management approaches for assuring the sustainability of this important resource.”