Last week was warm, with highs in the 80s and lows in the 60s. Little if any rain fell in the last week and soils are generally dry. Rainfall this season has been very uneven. Comparing this season’s rain across southwest Michigan shows an average of over 12 inches, with some sites receiving only half (8 inches) of the sites which received the most (16 inches). Last week’s potential evapotranspiration was about 1.3 inches of water and for a season total of over 20 inches since April 1. This week will warmer with highs in the 80s and a chance of showers Wednesday, Thursday and through the weekend. We are about a week ahead of normal for heat accumulation, but a comparison of the last five years shows we are similar to 2015 and lagging behind 2012 and 2016, which were much warmer. Crop harvests seem to be about two weeks ahead of normal.

The summer generations of many insect pests are emerging or damage is appearing in orchards. Japanese beetles are a problem in some locations. San Jose scale catch rose sharply this week at Trevor Nichols Research Center. This rise signals the start of the third generation. Any site showing red spots on fruit or limbs this season should be treating for crawlers 375 growing degree days base 51 F from this date, or approximately in approximately 10 to 12 days, given normal temperatures. Brown marmorated stinkbug in the past few years have caused problems in orchards starting in mid to late August. Growers can review the insect trap catch at Trevor Nichols Research Center. Young plantings on sandy sites have been showing some drought stress symptoms in mid-day. Leaf samples for foliar tissue analysis should be collected from mid-July to mid-August. Tissue samples should be sent to A&L labs.

Peach growers in the Berrien County area are harvesting Redhaven and other varieties. Peach varieties in this window include PF14 NJ, Starfire, PF-9A, PF Lucky 13 and PF 11 Nectarine. Quality is good. Only a few split pits associated with big pit varieties and light crops. Fruit speckles due to bacterial spot can be seen where infected leaves are nearby. To increase fruit color, growers can do light summer pruning one to two weeks before harvest on varieties needing more color. Oriental fruit moth trap catch is spotty but it did rise in many orchards. We near the beginning of the third oriental fruit moth flight. Stinkbugs and tarnished plant bug damage can increase fruit susceptibility to brown rot. As fruit begins to color the need for brown rot protection increases. Growers should rotate fungicide classes used for brown rot control to avoid resistance problems.

Cherry harvest has ended in southwest Michigan. Cherry leaf spot is a serious problem in some orchards. Chlorothalonil can be used after harvest to help suppress cherry leaf spot with low risk of resistance buildup by the fungus.

Apples range from 2.75 (Red Delicious) to 3 (Zestar) inches in diameter. Zestar harvest appears to be about one week early, based on blush and sugar development. Fungicides to reduce sooty blotch and flyspeck should be reapplied as rains wash off fungicide coverage. Fruit entries by oriental fruit moth larvae of the 2nd generation are scarce. Oriental fruit moth are pupating now and the third generation flight should begin soon. Codling moth trap catch for the 2nd generation, increasing in mid-July, has dropped off this week. Larvae from this flight will hatch over the next couple of weeks. Obliquebanded leafroller larvae are feeding on foliage and fruit. Apple maggot is a summer apple pest, which emerges after a rain and attacks apples. Apple maggot trap catch numbers continue to be relatively high. Growers need to be sure that the insecticides they are using will control all the insects attacking their fruit. Potato leafhopper injury is showing up on apple shoot tips. Wooly apple aphid aerial colonies and bronzing of leaves by European red mites are becoming easier to find.

Grape clusters are tightening. Early varieties should begin veraison in the next week or two. Downy mildew and powdery mildew incidence is still low. A few infections of phomopsis and black rot are present. Berries are resistant to new disease infections until veraison. Grape leafhopper and potato leafhopper not a problem in most vineyards this year. Japanese beetle numbers are low. There is some grape berry moth damage in grape clusters. We are still about a week away from the beginning of 3rd generation grape berry moth egg laying, when the next treatment is necessary. The grape berry moth model uses wild grape bloom to time sprays for grape berry moth. Wild grape bloom opened May 26-29 in Van Buren County and May 23-26 in Berrien County. Most vineyards have set fruit despite the frost damage this spring. The part of the fruit being borne on secondary shoots is catching up to the fruit on primary shoots. Catch of SWD is higher this year than previous years. It is likely that SWD will be a problem after veraison, especially in wine grapes. Hang traps for SWD and treat after veraison if necessary. 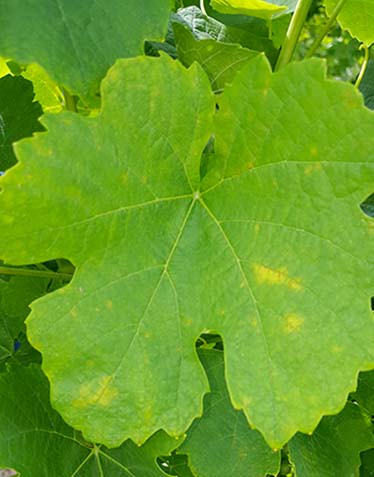 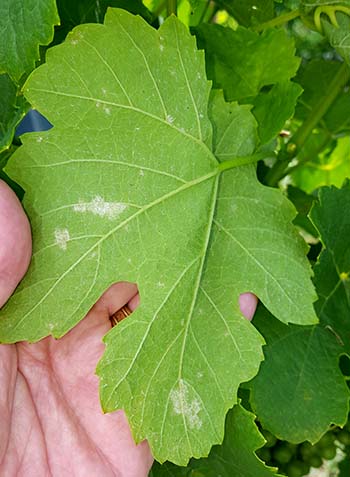 We are entering the late season when downy mildew can be a real problem. Downy mildew causes a yellowing of the leaf surface on the top of the leaf (left/top). The white sporangia can be seen on the bottom for the leaf (right/bottom). Photos by Mark Longstroth, MSU Extension.

Blueberry harvest is in full swing with grower pickings Bluecrop, Jersey and many other varieties. The season seems to be at least and week early and the first harvests of Elliott have begun. Both hand harvest and machine harvest are moving quickly. Labor continues to be a significant problem. Growers are using machines because of a shortage of hand pickers. Even the machines are falling behind because almost all fields have ripe fruit. Fruit quality is variable as growers struggle to remove ripe fruit quickly. SWD numbers are high. We are seeing SWD number as high as we normally see in August. Tight spray schedules are needed to control SWD. Protecting ripe fruit is very hard. Even with excellent insecticide programs, the longer ripe fruit stays in the field the more likely it is to be attacked by SWD. Tight harvest schedules reduce the time ripe berries are exposed to SWD. Michigan State University Extension recommends to not neglect fungicides. 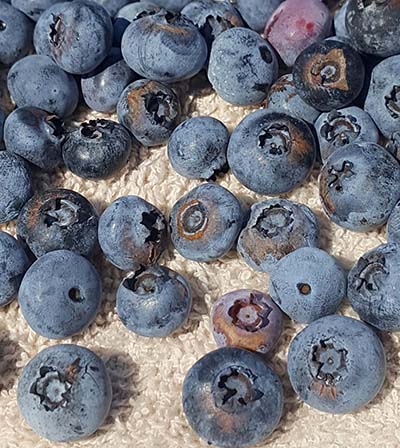 Frost damage in Elliott blueberries. Russetting of the berry skin around the calyx cup is due to damage from the freezes during bloom in May. The temperatures were cold enough to damage the skin of the berry but not cold enough to kill the green berry. Photo by Mark Longstroth, MSU Extension.

Fruit rots such as anthracnose and alternaria are becoming significant problems in some fields. Frost rings from the freeze in May during bloom are causing concern. Poor fruit size from poor pollination has been a significant problem in most varieties all season but it is very significant in Jersey and Elliott fields. Phomopsis canker and cane collapse is easier to find. In the next month, growers should collect leaf samples for foliar tissue analysis. Foliar analysis give a much better picture of the nutrition in the plant. Soil sample reveal what is in the soil but not what the plant needs to optimize growth and yields. 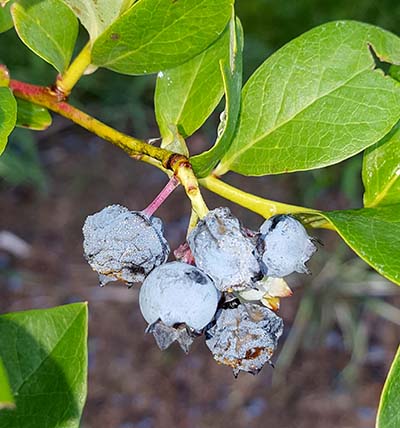 Anthracnose fruit rot is a problem in some blueberry fields. Photo by Mark Longstroth, MSU Extension.

Bramble harvest continues. Summer red raspberries are ending. Blackberry harvest is underway. The high SWD numbers have put real pressure on raspberries and blackberries one of their favorite hosts. Growers need to protect their fruit from SWD, see the MSU recommendations for SWD control in brambles. One of the best defenses is to pick as often as you can, removing ripe fruit as quickly as possible.

Strawberry fields are showing good regrowth after renovation and most fields are producing runners. Growers need to protect renovated plantings from potato leafhopper, which stunts plant growth. Be sure to irrigate renovated strawberry fields to get good growth for next year. 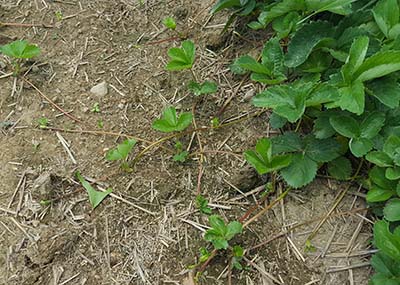