Higher water levels in winter are harbingers of what’s likely to follow in spring.

2019 will go down as a notable year with high water levels in the Great Lakes system. All the Great Lakes had very high water – and in the 100 years of accurate record keeping by the US Army Corps of Engineers in coordination with Environment and Climate Change Canada, the highest lake level average was set for Lakes Erie and Ontario (both June 2019), and Lake St. Clair (July 2019). Lake Superior broke some record high monthly averages in May, June and July and came within 2 inches of equaling its highest recorded monthly average (set in October 1985). While not officially breaking any monthly record high levels in 2019, Lakes Michigan-Huron had very high levels and the highest since 1986.

Lakes Michigan-Huron share the same level due to the connected geography at the Straits of Mackinac and have a combined surface area of 45,445 square miles of the earth, much larger than even Lake Superior’s 31,820 square miles of surface. The July 2019 average showed the lakes were 2 inches below the July 1986 record. What happened in 1986? As the website 1986flood.com describes, Michigan had one of the worst extreme weather events in the state’s history. The deadly storm system covered an area 180 miles east to west and 60 miles north to south, dumping torrential amounts of rain over the course of three days. All this runoff went directly into Lakes Michigan and Huron.

The storms hit hardest in the Saginaw Bay and Thumb regions of Michigan where 22 counties were declared federal disaster areas impacting more than 1.8 million residents. The storm happened September 9-12, 1986, and rainfall averaged between 8 and 15 inches. Eleven dams failed including the Hart Dam in Oceana County, which emptied out Hart Lake destroying the southbound portion of the US 31 Bridge and forcing 300 people to evacuate their homes.

These massive precipitation inputs propelled Lakes Michigan-Huron to their highest heights measured since 1918. The October monthly average high of 582.35 feet above sea level still represents the highest average – over 5 inches higher of still water than was measured during the July 2019 summer high of 581.92. But as the chart shows, 2019 set the fourth and sixth highest averages in the 1,200 months of record keeping. 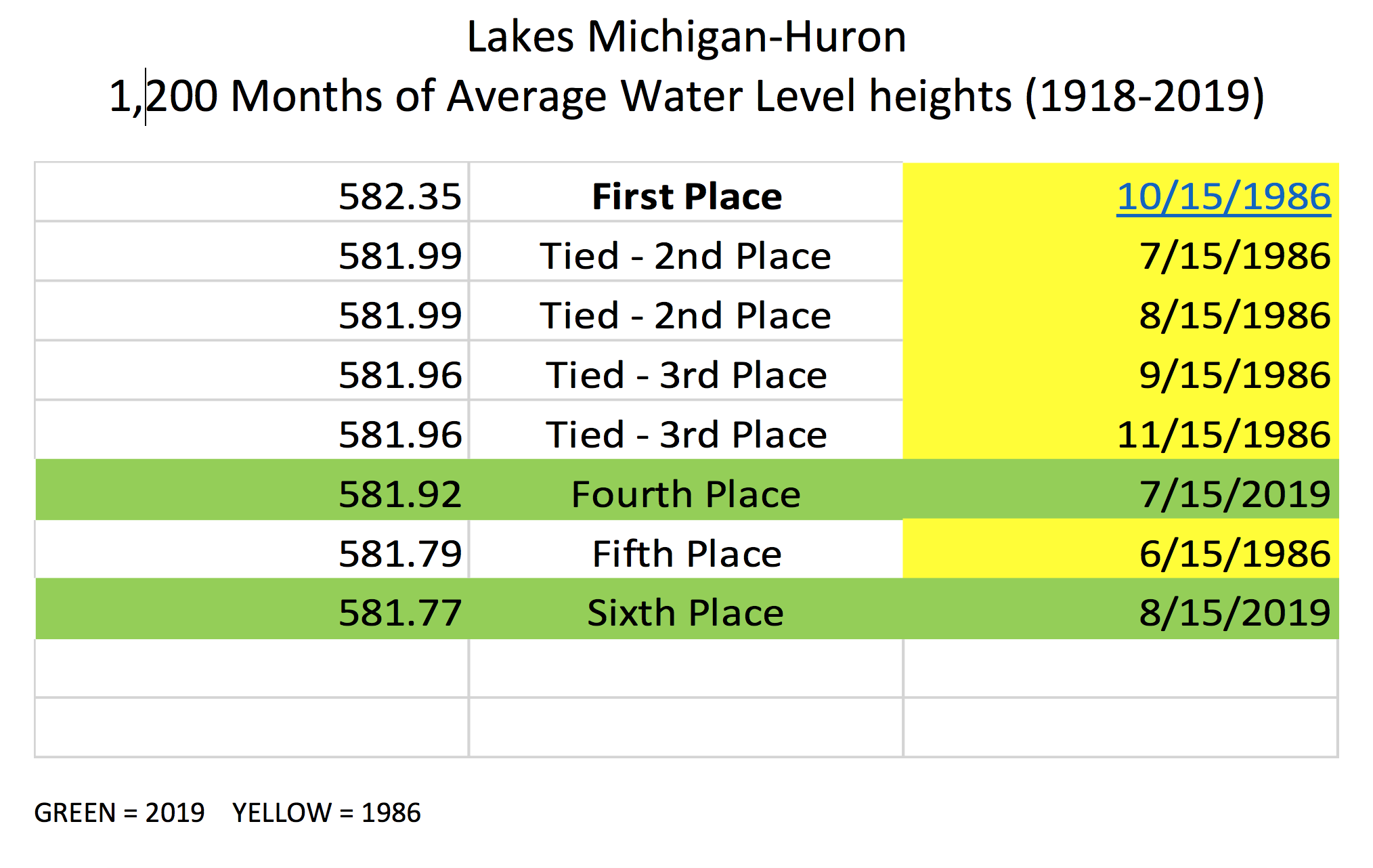 What about the stair steps up to 2020 for Michigan-Huron?

In the first week of November 2019, the lead U.S. agency, the U.S. Army Corps of Engineers released the 6 month levels forecast. This gives us insight of what to expect heading into the first part of 2020.

Just a reminder that the lowest time of the year for all the Great Lakes is during the winter, usually the January-February time frame. This is referred to as the “winter low.” From there all lakes go up varying amounts with the melting snow and spring precipitation to the “summer high” and then gradually head down again to the next winter low.

So if we start 2020 with a winter low of about 581.17, and have a conservative long term average seasonal rise of 12 inches during 2020, this would break records for sure. If somehow we had a seasonal rise similar to 2019’s 22-inch seasonal rise we would be in uncharted territory.

There will be a more accurate forecast in early December 2019 but it certainly appears we will have a very high 2020 and coastal communities will need to prepare as best they can for similar impacts as they experienced in 2019.

There is coordinated efforts going on with the State of Michigan, U.S. Army Corps of Engineers and other agencies including NOAA National Weather Service and Michigan Sea Grant to try to educate, assist and forecast things such as strong storms and associated coastal erosion and flooding. The state recently set up a new website for information and this may be an excellent starting place for information:

Here are some helpful tools and information as we head into the new year to help get through a year of high water:

Michigan State University Extension and Michigan Sea Grant held several outreach programs about high lake levels in 2019 and expects to continue doing so during 2020. Check our calendar page for updates on upcoming workshops.