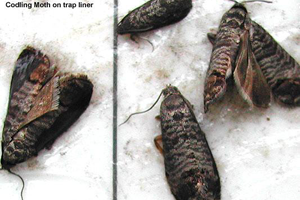 Sometimes the only way to make something better is to forget everything you already know about it and start again.

That strategy brought some surprising results – in a good way – for MSU AgBioResearch entomologist and Extension specialist Larry Gut in research to improve management techniques for codling moth (the infamous “worm in the apple”) for Michigan’s fruit growers.

“With the current strategies, growers haven’t been absolutely confident in knowing where codling moth populations are in their orchards,” said Gut, a professor in the MSU Department of Entomology, who specializes in tree fruit entomology. “The pheromone traps currently in use have become the standard for trapping codling moth, but growers weren’t always seeing a correlation between the number caught in the traps and what was actually happening in the orchard. They want to make sure they are putting the pheromone traps in the places where what’s being caught will actually represent the population of the pest in that area of the orchard.”

Gut and his lab group figured there had to be a better trap.

“I told my crew to ignore what they knew about these traps and find what works best,” he said. “They started over, using information we have learned about codling moth behavior. These traps needed to do more than attract -- they needed to help control codling moth.”

Gut has seen great value in behavior-based pest research during his career, and his lab crew has used it extensively in many projects. Pheromone traps now hang parallel to the trees with the lure at the bottom, but it wasn’t really known if this was the best way to attract codling moth.

Gut’s lab created and tested more than a dozen traps of varying sizes, shapes and orientations to see what made codling moth males prefer one over another. While working with trap designs in the laboratory flight tunnel (where the pests are plying about freely in a controlled area and closely monitored), Mike Reinke, a graduate student in Gut’s lab, stumbled upon the effectiveness of hanging the trap so that it’s perpendicular to a tree. This approach, coupled with a newer, smaller trap design, resulted in a trap that not only attracted the pest but captured nearly 100 percent of the male codling moths that made contact with it.

“The consistently higher catches in these new traps with all interior walls treated with stickum and small holes for entry of moths suggests that growers could benefit from adopting this system as the standard,” Gut said. “It has evolved from a trapping and monitoring tool to a control method.”

This trap is in its first year of use. The Michigan Apple Committee has been a funding partner in its development, along with Michigan’s plant agriculture initiative, Project GREEEN (Generating Research and Extension to meet Economic and Environmental Needs). Gut has done the preliminary work to patent the design, which is also being tested in Australia.

Gut’s research has also shown that, when growers are placing codling moth pheromone traps in suspect areas in the orchard, more are better. He said that growers want to make sure that they place numerous traps in areas where codling moths have been problematic in the past. Also, Gut has found that traps that use plant volatiles as an additional attractant lure more moths than those using pheromones alone.

Growers are seeing the effect of this research. In an interview with Fruit Growers News magazine, Steve Thome, current president of the Michigan State Horticultural Society and owner of Thome Orchards near Grand Rapids, talked about the success he’d had using codling moth trapping and disruption methods over the past seven years.

“We’ve learned a lot,” he noted. “We continue to monitor, and have one trap per every 5 acres. We run our own trap line, and there are some hot spots that we have to spray, such as abandoned trees or wild trees. But for the most part, we have season-long control. We might have sprayed 15 acres this past year [out of roughly 115 acres].”

Increased knowledge of codling moth behavior has also led to the discovery that temperature has a dramatic effect on codling moth flight, and growers can use this information to time their pesticide sprays efficiently and economically.

“The correlation between temperature and flight has helped us create an improved decision-making model for growers that can save them time and money,” Gut said. “Often in the springtime, we’ll get questions from growers who are seeing moths in their apple orchards but aren’t sure if they should be spraying for them because it’s still cold. The temperature models we have created can tell them when to concentrate on treatment.”

With proper monitoring systems and decision-making tools, apple growers in Michigan can eliminate unnecessary treatments, saving time, labor and money. It is estimated that a single pesticide treatment can cost $40 or more per acre, so a grower with a 100-acre orchard can save $4,000 by eliminating a single treatment. Doing this across the 43,000 acres of apples grown in the state would amount to a $1.94 million savings.

Other institutions have become partners in this research, and funding from the North Central Regional Integrated Pest Management (IPM) Program is being sought to continue the project. Gut plans on writing a bulletin that details procedures for monitoring codling moth and doing field evaluation of the proposed protocols in commercial orchards in Michigan.