A new way scientists – all kinds of natural and social scientists – are using to scrutinize some of the world’s biggest challenges in sustainability is getting its turn in the spotlight.

This week, a scientific publication written by Jianguo “Jack” Liu and some of the world’s most noted sustainability scholars has been given the Ralf Yorque Memorial Competition Award as best paper in 2013.

“Framing sustainability in a telecoupled world” was published in Ecology and Society” in June. The paper 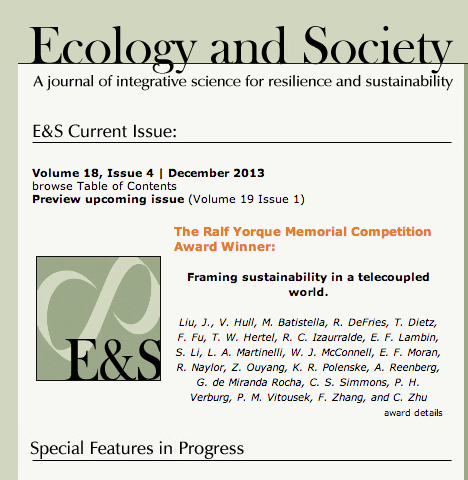 outlined a new framework that presents an integrated way to study a world that has become more connected – with distance shrinking and linkages strengthening between nature and humans.

“Telecoupling” describes socioeconomic and environmental interactions over distances. The framework holds promise for some of the world’s greatest challenges – water sustainability, food supplies, climate change and food security as examples.

“We need an integrated umbrella framework that can capture all different kinds of socioeconomic and environmental interactions among coupled human and natural systems across scales and over distances,” said Liu, director of the Center for Systems Integration and Sustainability at Michigan State University. “That will help scientists more systematically understand connections and feedbacks between different places.”

This award recognizes the most novel paper published in 2013 in the international journal Ecology and Society that integrates different streams of science to assess fundamental questions in the ecological, political, and social foundations for sustainable social-ecological systems.

The selection is a result of the votes from the editorial board of the journal.

Telecoupling, Liu said, is more than a buzzword. He proposed the telecoupling concept in 2009 and first introduced it at a symposium at the American Association for the Advancement of Science Annual Meeting in 2011. It allows scientists to take a truer look at socioeconomic and environmental issues across spatial, temporal, and organizational scales simultaneously. .

He uses wood trade as an example – noting that each step, from harvesting wood to exporting lumber to building houses and selling products such as furniture, has socioeconomic and environmental impacts. And those impacts ripple far beyond each splinter. Focusing only on the trees, or the new subdivision, offers just a narrow understanding of a global event.

The telecoupling framework, Liu says, is a multidisciplinary approach that can allow both humans and the environment to thrive.

The award includes a prize of 500 Euro. The work was supported by the National Science Foundation, MSU and MSU AgBioResearch.

Framing sustainability in a telecoupled world