The uncompromising zoning administrator is not a bad person

On the other side, the zoning administrator may be mumbling, “This is such a minor thing, if only I could look the other way,” or “I do not even agree with this regulation, but I have to enforce it.”

So why do these stories circulate? Why are officials so uncompromising? Or from the other perspective, why should a government official (like a zoning administrator) behave without any apparent ‘common sense’?

One major reason for consistently following the regulation comes down to maintaining governmental immunity. The idea behind governmental immunity is to protect the individual person (who happens to work, volunteer, or is elected in government) from personal liability. When one is acting on behalf of a local government, they are not supposed to be acting for themselves. They should not be held personally liable for those actions.

The presumption is that as long as the government is acting in good faith to carry out its responsibilities consistent with the law then those actions are immune from liability. The “government” also includes its employees, and volunteer, appointed and elected officials. Responsibilities consistent with the law means the actions must be a proper government function and not violating anyone’s constitutionally protected rights. And in good faith means the person’s motivation and belief was they were doing the right thing.

But everything a government does is not protected by governmental immunity. In Michigan there are statutory exceptions to governmental immunity. Examples include some instances of sidewalk trip and fall and vehicle damage due to road defects. But the statutory exceptions do not generally apply to zoning administration. some slack?” or, “They are such a stickler for following the rules.” 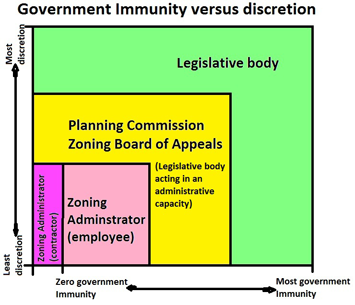 The amount of government immunity is also not equal for everyone in government. Figure 1 at right illustrates that the legislative body (elected officials: city or village council, township board of trustees, county board of commissioners) have the most immunity and have the most discretion in decision making. Legislative bodies set policy and adopt ordinances, an area where discretion is often used.

The amount of government immunity is also not equal for everyone in government. Figure 1 illustrates that the legislative body (elected officials: city or village council, township board of trustees, county board of commissioners) have the most immunity and have the most discretion in decision making. Legislative bodies set policy and adopt ordinances, an area where discretion is often used.

Volunteers and appointed officials on boards, such as planning commission and zoning board of appeals members, have less discretion and less immunity. These boards act in an advisory and administrative capacity. They have more discretion than the zoning administrator. They are generally safe as long as acting within their scope of authority and acting in good faith. If a legislative body is performing administrative functions, such as acting as the planning commission, or making final approval of special use permits or site plans, then the legislative body’s immunity is the same as the planning commission’s and zoning board of appeals’.

So the zoning administrator should not overlook the distance of a 1-foot violation. If he or she does and someone else gets upset, there might be serious consequences.  As the saying goes, “no good deed goes unpunished.”

A person that does not agree with the zoning administrator has the opportunity to appeal their decision to the zoning board of appeals (ZBA), even when it is as minor as falling short of a required setback by 1 foot. The ZBA has more discretion to provide relief for special circumstances and more immunity to cover that additional discretion. The opportunity to pursue such an appeal is required by Michigan’s zoning law. Michigan State University Extension has resources for citizens to help prepare and understand the appeals process.

If the situation warrants, the zoning administrator can also make the Planning Commission aware of a regulation that appears to make little sense. That board, which has more discretion, can consider going through the required steps in order to recommend new language to the legislative body for consideration.