Tree galls are rarely cause for concern

While they may look menacing, galls pose very little threat to tree health in most cases and are not worth controlling by a homeowner. 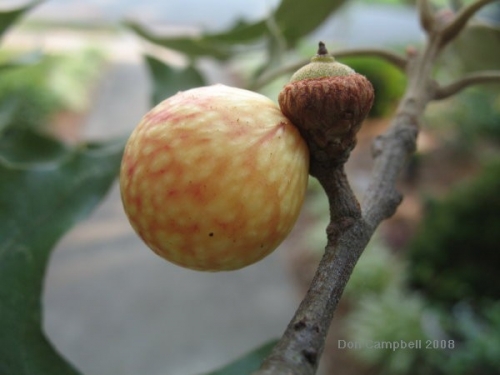 Over the last few weeks, many homeowners have noticed strange-looking, spherical objects littering their lawn and driveways underneath their oak trees in several locations across north-central Lower Michigan. From a distance, most people would probably guess that they are acorns on the ground. But upon closer examination, they notice something quite different! In many cases, what people are observing is a particular species of tree gall that has been falling off their oak tree (along with a few acorns as well).

This past summer, the gall known as the Acorn Plum Gall has been particularly plentiful on red oaks in the northern lower peninsula (see photo).

Galls are abnormal growths or swellings of plant tissue caused by an organism. Galls can form on both woody and herbaceous types of plants. Many types of plant galls are caused by mites and insects, although bacteria, fungi and viruses can also cause these strange growths to form. In many cases, galls form on the leaves of plants but occasionally twigs and branches can also be attacked.

The Acorn Plum Gall is caused by a Cynipid insect wasp Amphibolips quercusjuglans. The common name of this gall is reflective of both its color and where it grows on an oak. This gall is reddish in color and slightly speckled, and looks very plum-like in appearance. It also grows attached to an acorn or twig with acorns on an oak tree.

Cynipid wasps are a large family of insects that cause many different types of galls to form on tree and plants. Adult female wasps lay eggs on leaves, twigs or other parts of plants which also causes swellings around the immature larva to form, producing a gall. In essence, part of the life cycle of this wasp is spent inside this gall. As the larva begins to mature, the gall will fall off and/or open up and allow the mature insect to vacate the gall.

Galls are one of the more intriguing sides of nature to view and behold. They come in all shapes, sizes, colors and textures – truly one of nature’s more “artistic” flourishes! Oak trees, in particular, appear to get many different types of galls.

For a quick sampling, check out this weblink from North Carolina State University on tree galls. Many species of trees can be attacked and produce galls, including a maples and ash and even some conifer species. Like many insects, populations of gall insects will vary from year-to-year. Consequently, in some growing seasons, some species of galls will be more plentiful than in other years.

While galls may appear threatening, based upon their appearance, most galls actually pose very little threat to overall tree late to try and chemically control it. Pesticide sprays would have had to have been applied earlier in the growing season prior to gall formation. And since many galls form on the leaves of deciduous plants, these leaves will fall off in autumn – giving tree leaves a “clean slate” to start off in the next growing season.