The weight of soybean loads is also reduced to account for foreign material (FM) in soybeans. Just as with moisture shrink, grain buyers shrink or reduce the gross weight of the load based on the actual FM found in the sample. Although U.S. number 1 yellow soybeans allow for 1 percent FM and U.S. number 2 yellow soybeans allow for 2 percent FM, there are many companies that will allow only a half percent and some will shrink for any FM above 0 percent. Some elevators also assess an FM discount in addition to the FM weight deduction or shrink. The FM discounts range from $0.01 to $0.05 for each 1 percent of FM found in the sample above 1 percent. The discount typically increases as the amount of FM in the sample increases. 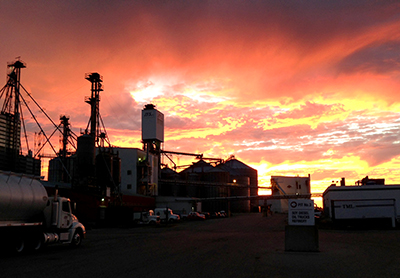 Damaged seed includes heat damage, frost damage, immature seed, mold damage, insect damage and sprout damage. Producers are allowed up to 2 percent damaged beans before damage discounts apply. Damage discounts range from $0.02 to $0.05 for each 1 percent above 2 percent. The discount typically increases as the amount of damage in the sample increases.

Heat damage (black or dark brown soybeans) can occur when wet soybeans are dried at too high of a drying temperature (greater than 130 degrees Fahrenheit). However, most heat damage occurs when soybeans are placed into storage at moisture levels that are too high for safe storage and hot pockets develop in the grain mass. Heat damage is included in the damage (total) category and producers are not charged twice for this type of damage.

Beans are counted as splits whenever a quarter of the seed is missing. Producers are generally allowed up to 20 percent splits at delivery without being discounted. However, some grain buyers begin discounting when split beans exceed 10 percent. The discount for splits ranges from $0.01 to $0.05 for each 5 percent increase in split beans and increases as the percentage of splits in the sample increases.

This example demonstrates how the shrink, discounts and net payment or settlement are calculated for a load of soybeans weighing 55,000 pounds having the following grain quality factors and a market price of $9.25 per bushel:

No test weight discount applied to the load

No discount for split beans applied to the load

Net payment/settlement on the load