Mike Hamm was one of two sustainability consultants to the 2015 US Dietary Guidelines Advisory Committee (DGAC). In this blog, Hamm responds to comments that misinterpret the 2015 DGAC report's findings about diet and sustainability.

The following was originally posted on the website of the Food Climate Research Network at the University of Oxford on March 11, 2015. 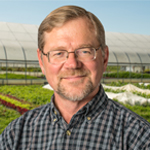 When I was giving my public seminar in 2002 for the position I now hold at MSU, one of the first questions was, “Are you for sustainability?”  My answer was, “Who would say they aren’t for sustainability?”  Everyone nodded, and my next comment was, “but then, the devil’s in the details.”  This seems to be the tenor in a number of the public comments and the swirl occurring in Washington regarding the recently released Scientific Report of the 2015 [U.S.] Dietary Guidelines Advisory Committee.

The summary of the Committee’s findings is really quite straightforward.

“The major findings regarding sustainable diets were that a diet higher in plant-based foods, such as vegetables, fruits, whole grains, legumes, nuts, and seeds, and lower in calories and animal based foods is more health promoting and is associated with less environmental impact than is the current U.S. diet. This pattern of eating can be achieved through a variety of dietary patterns, including the Healthy U.S.-style Pattern, the Healthy Mediterranean-style Pattern, and the Healthy Vegetarian Pattern. All of these dietary patterns are aligned with lower environmental impacts and provide options that can be adopted by the U.S. population. Current evidence shows that the average U.S. diet has a larger environmental impact in terms of increased greenhouse gas emissions, land use, water use, and energy use, compared to the above dietary patterns. This is because the current U.S. population intake of animal-based foods is higher and plant-based foods are lower, than proposed in these three dietary patterns. Of note is that no food groups need to be eliminated completely to improve sustainability outcomes over the current status.” (taken from Executive Summary)

Within the body of the report it has a briefer statement regarding the implications of the Committee’s findings.

“A moderate to strong evidence base supports recommendations that the U.S. population move toward dietary patterns that generally increase consumption of vegetables, fruits, whole grains, legumes, nuts and seeds, while decreasing total calories and some animal-based foods. This can be achieved through a variety of dietary patterns, including the Healthy USDA-style Pattern, the Healthy Vegetarian Pattern, and the Healthy Mediterranean-style Pattern.” (pdf of Report, Part D Chapter 5 Food Sustainability and Safety, p.383)

In addition, it was consistent with the Committee’s historical focus on food security. Thinking about food security for now without considering the potential for food security of future generations is short sighted.  Thus, the DGAC states,

“Food security exists when all people now, and in the future, have access to sufficient, safe, and nutritious food to maintain a healthy and active life.”  (pdf of report, p. 375)

Over the last several weeks, there has been a lot of buzz about this report (the nearly 600 page report can be downloaded at http://www.health.gov/dietaryguidelines/ (link is external) ).  First a bit of context - a new report is developed every five years via Congressional authorization. The Dietary Guidelines Advisory Committee (hereafter – DGAC) delivers its scientific report to the Secretaries of Agriculture and Health and Human Services following two years of deliberation, testimony, public comment and literature exploration. For the first time, the committee included a discussion of sustainability and dietary patterns.  Given the types and level of response to this part of the report (which is less than 30 pages of the total) it is clear that there is a lot of interest about sustainability and our food supply and a fair bit of misinterpretation of what the report implies.

As the committee report states:

“Meeting current and future food needs will depend on two concurrent approaches: altering individual and population dietary choices and patterns and developing agricultural and production practices that reduce environmental impacts and conserve resources, while still meeting food and nutrition needs. In this chapter, the Committee focuses primarily on the former, examining the effect of population level dietary choices on sustainability.” (pdf p. 376)

In other words, it adhered carefully to the focal point of its charge- the American diet.

There is a broad and dynamic literature on sustainability, food supply, and agriculture.  Many of you reading this blog have a lot of knowledge of the various avenues of the published research.  For the DGAC report process a partial swath of the published literature was used in the analysis conducted by the DGAC and the USDA/HHS staff.  Why?  In part because the committee adhered to its charge of focusing on the American diet, using dietary patterns as the overarching analytic frame. Also, the analytical process culled a number of studies that didn’t meet the included criteria. Published research used for analysis in this report was identified through a rigorous analytical process conducted by a diligent, thoughtful, and hard-working staff at USDA and HHS.  Typically, they utilize the Nutrition Evidence Library of USDA (see www.NEL.gov (link is external) if interested in seeing reviews) for systematically analyzing the literature on a topic, deciding which studies have been conducted in the rigorous manner needed and helping develop both conclusions and their confidence strength. These results were discussed and debated by the sub-committee members, decisions made, and then reported for discussion to the whole DGAC committee in public meetings.  The process for evaluating dietary patterns and sustainability was modified a bit due to the types of studies conducted (often modeling studies of dietary patterns).  The full process is outlined in the report along with all studies referenced.

Out of this report process comes both dietary recommendations as well as recommendations for future research to help clarify or extend our understanding in an area.  All of this is input for USDA and HHS in updating the dietary guidelines (in this case those from 2010) that then inform public policy.

The committee used the adjacent figure to frame its thinking about more environmentally sustainable dietary patterns.  Two key bullets relative to dietary guidelines are that policies be informed by best evidence that engage multiple sector stakeholders and our need to achieve healthy dietary patterns that consider sustainability as integral to ‘healthy’.

It’s interesting to review the range of public comments received so far on the dietary guidelines website (see: http://www.health.gov/dietaryguidelines/dga2015/comments/readComments.aspx (link is external) and sort on ‘Chapter D 5: food sustainability and safety’ for the comments particular to this issue).  Two things are abundantly clear: there is a wide range of opinion on this topic, and there is a great deal of passion.  There are certainly a number of boiler-plate letters but also a number of passionate, individual letters.  They range from ‘why didn’t you go further than this and recommend everyone be vegetarian’ to ‘why are you talking about sustainability, it has nothing to do with health’.  I summarize but don’t exaggerate.  I think the most interesting are those who seem to either purposely or accidentally misinterpret what the report says with respect to environmental sustainability.  Nowhere does the report state Americans should cease consuming beef or other animal products. Nowhere does the report state a more environmentally sustainable diet means that everyone must be a vegetarian.

There are no absolute statements regarding environmental sustainability and diet for a reason.  Absolutes would have forced the committee to negate a nuanced analysis (for example – the potential use of erodible land placed in permanent cover for animal or energy crop production) – one of my most common answers to students is “it depends ...” Also, the committee would then be forced to migrate into specific production and land use practices – areas the committee agreed were outside its purview.  What the committee actually says is “…[diets] lower in calories and animal based foods is more health promoting and is associated with less environmental impact than is the current U.S. diet.” LOWER in animal based foods!  Probably the piece of misinformation regarding the environmental sustainability recommendations is that they are prescribing what Americans will eat – rather, what the report intends to do is provide recommendations for patterns of consumption relative to the best science available that can simultaneously improve public health and the environmental sustainability of our food supply.

The DGAC report, besides serving as the basis for policy around dietary recommendations, can also be used as a tool for catalyzing research in areas that need strengthening prior to the next DGAC report in 2020.  There were four research recommendations regarding dietary pattern and sustainability:

From the reading of the public comments, it is pretty clear that there is probably considerable pressure forthcoming to try and reduce the impact of this document and, in essence, negate the section on dietary pattern and sustainability.  It is my hope that cooler heads will prevail and that a recognition that we need to both improve the environmental characteristics of our production practices within a food sector AND improve the environmental characteristics of our dietary pattern as a whole.  It is the former that most of those arguing against the report comment on and it is the latter on which this DGAC focused.