Professor Emeritus, Lester V. Manderscheid, was born on a farm near Andrew, Iowa, at the beginning of the Great Depression.  His early education was in a one-room schoolhouse and a small rural high school.  At age 16 he entered Iowa State University, where he received bachelor’s and master’s of science degrees.  He completed a doctoral degree at Stanford University and became a faculty member at Michigan State University (MSU) in 1956.  He was soon promoted to associate professor and then professor in 1970.  The Department of Agricultural, Food and Resource Economics, the College of Agriculture and Natural Resources, the Graduate School, Michigan State University and the profession lost a valued and dear friend and colleague Oct. 23, 2012.

During his career at MSU, Les earned many honors and was asked to assume many leadership roles.  He served the university on the University Athletic Council, the University Committee on Curriculum, the University Faculty Tenure Committee, and the University Educational Policies Committee, and served as chair of the University Steering Committee.   A member of the Academic Council, he was instrumental in revising bylaws, reducing the number of university committees, changing the idea of the different levels of participation and standardizing university committee procedures.  He also served as president of the MSU chapters of Sigma Xi Honor Society and Phi Kappa Phi Honor Society.  Les had a reputation for fulfilling any task that he assumed in a timely manner and with the highest quality.  While involved with most of these committees and leadership roles, he also served the department, first as associate chair and director of the graduate program during 1973-87, and then as chair for the period 1987-92.

As a result of his outstanding scholarly record and his role in university governance, he was honored with the MSU Distinguished Faculty Award.  His peers in the profession selected him to serve on the board of directors of the American Agricultural Economics Association (AAEA), and later they elected him president for 1988-89.  As president, he formed the Adaptive Planning Committee, which called for redefining the association as a federation of more specialized subgroups or sections.

The listing of the various committees, awards and honors does not capture the true impact that Les had on students, his colleagues and the profession.  He had a burning passion for teaching at both the undergraduate and graduate levels.   Les was known for his engaging teaching style and his ability to motivate students to master complex and challenging quantitative methods.  His graduate-level econometric course was often viewed as the “gold standard” for teaching graduate courses.  He stressed good empirical methods, noting, “If you do not have the theory right, and then the model right, you get nonsense back.”

He mentored many students, including a future governor, lieutenant governor, three MSU trustees, and many agricultural and rural community leaders.  He was the major professor for many graduate students and served on numerous graduate committees.  Les was known for his unwavering desire to help students correctly interpret the results of their research models and learn from the process.  Among the graduate students he mentored were future officers and presidents of the AAEA and the International Association of Agricultural Economists.

Les was also an educational trailblazer.  After several years of declining undergraduate majors in the department, Les was a key leader in moving the department away from a traditional agricultural economic curriculum to two new curricula, Food Industry Management and Agribusiness Management.  These new majors resulted in a strong and steady growth in students in the department.  These restructured curricula were later adopted by several other departments in the country.  Because of his leadership in redefining the department’s curricula, he was consulted by the Committee for the Review of Undergraduate Education (CRUE), which repositioned and revitalized undergraduate education, redefining the role of the core course and promoting the education of the whole student.  Because of Professor Manderscheid’s exceptional scholarly teaching record, the AAEA awarded him the Distinguished Teacher Award.

Les Manderscheid was involved in international projects in Africa, Asia, and South America. He was Chief of Party of the delegation of MSU faculty members invited to lecture in northeastern China in 1982, shortly after the reopening of international relations between the two countries. As a fellow member of the delegation, I grew familiar with Les’ non-academic side.  For the month of our stay, our evenings were generally free.  The weather was cold, but the hotel heating did not function initially.  Les, Glenn Johnson and I kept warm by sipping warm and potent beverages while sharing our interests, experiences and many humorous moments.  It was a memory that I will long cherish.  That trip also highlighted for me Les’s loyalty as a Spartan. In an age before Internet and with limited communication facilities, Les was able to obtain all the key scores for the Spartan teams while in China.

Les viewed retirement as an opportunity to engage in new adventures and challenges.  The day following his retirement in 1992, he returned to part-time work in the Department of Agricultural Economics and in the Graduate School.  At the Graduate School he developed and implemented the Distinguished Fellowship Program.  In recognition of his active involvement in retirement he was selected by the MSU Faculty Emeriti Association to receive their Individual Superior Service Award in 2008.

Les will be remembered as a valued colleague.  He was often sought by his peers to collaborate on research projects.  He served as a mentor to several young faculty members and had a way of identifying their strengths and encouraging them to utilize those strengths as they advanced in their careers.  He looked forward to the morning coffee room discussions with his peers.  His insights with respect to campus politics were appreciated by everyone.  If you had a question regarding the history or background on some campus activity or event, Les had an answer.  Even in retirement he continued to be a frequent visitor to the coffee room.  He will also be remembered as one who interacted widely with those outside his department.  His leadership skills were also made available to the broader community, particularly his church.  Les and Dorothy often played in a Friday night bridge group with other faculty members and their spouses, another fond memory among so many. 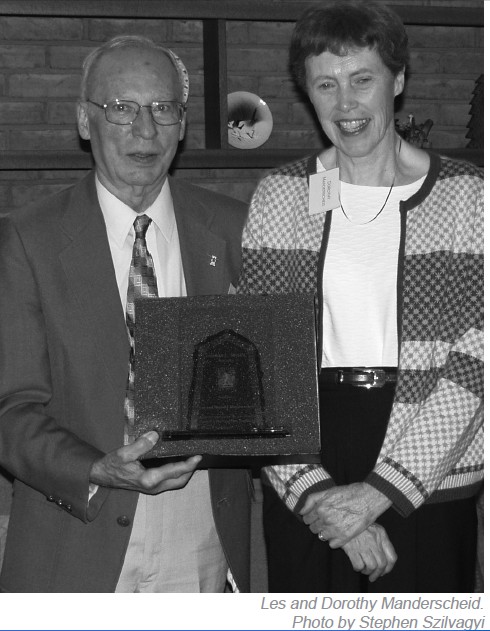