Speeding up the clock: Accelerating fruit breeding through genetic technology

Michigan State University plant geneticist Amy Iezzoni is working to speed up fruit breeding by helping breeders take advantage of the wealth of fruit genetic knowledge that has emerged, particularly in the past decade.

When shopping for fruit — whether at a supermarket, corner grocery store or farmers’ market — consumers look for specific characteristics such as rich color and full shape. Producing varieties that display these hallmarks of healthy fruit is a slow process, however, often spanning decades. Breeding a new apple or cherry variety, for example, can take 15 to 25 years.

Michigan State University (MSU) plant geneticist Amy Iezzoni is working to speed up that clock by helping breeders take advantage of the wealth of fruit genetic knowledge that has emerged, particularly in the past decade. Her work has accelerated various fruit breeding programs across the country and allowed even the most stubborn traits to be improved.

In 2009, through a $7.2 million grant from the U.S. Department of Agriculture (USDA) National Institute of Food and Agriculture Specialty Crops Research Initiative (SCRI), Iezzoni began the RosBREED project to help breeders incorporate the latest genetic knowledge and tools on Rosaceae, a family of flowering plants including apples, peaches, sweet and tart cherries, raspberries, plums, pears and strawberries. Today, the project, led by Iezzoni and Washington State University plant geneticist Cameron Peace, has been refunded through SCRI for $10 million. A team of 35 scientists, including fellow MSU AgBioResearch scientists James Hancock and William Shane, from 14 universities and USDA agencies, along with international collaborators, are continuing their eff ts to help fruit breeders produce the best and most competitive products possible.

“When we began our project, the  genome sequences of peaches and diploid strawberries were becoming available, but no genetic knowledge was being used in breeding,” said the MSU Department of Horticulture professor. “We had a huge chasm between what was known genetically and what was being used in application.”

The team learned that they could frequently apply knowledge of a genetic factor in one fruit to the others with little adjustment because the fruits share common ancestry. For example, the genetic factor that controls the expression of red pigment is identical for apples, cherries and peaches.

“We, as researchers, decided to work together as a crop group because the fruits all belong to the same family,” Iezzoni said. “We all had the same needs, and we could leverage that.”

Under Iezzoni’s direction, the RosBREED team developed genome scans that allow researchers to mark the most important genes in each crop. Through statistical analysis, they are then able to identify the variation in these major genes and uncover the alleles — the different possible expressions of a gene in an organism — that yield the most desirable characteristics, all before the production of any fruit.

Before the application of genetic technology made possible through RosBREED, fruit breeders were often limited to observing phenotypes — a fruit’s physical characteristics — to make their breeding decisions. Though this worked, the process was time-consuming and inefficient because breeders had to wait for a plant to bear fruit to determine its effectiveness. Thanks to the technology pioneered by RosBREED scientists, however, breeders are able to know what kind of fruit a plant will produce before it even flowers.

“For example, when you see sweet cherries in the supermarket, some are black and others are yellow,” Iezzoni explained. “If you want to release only black ones, you would cross two black sweet cherry plants. At harvest, however, a fourth of their cherries could have turned out yellow, and the producer would have wasted five years producing 25 percent extra cherries. With our genetic tests, we eliminate that risk for the grower.” 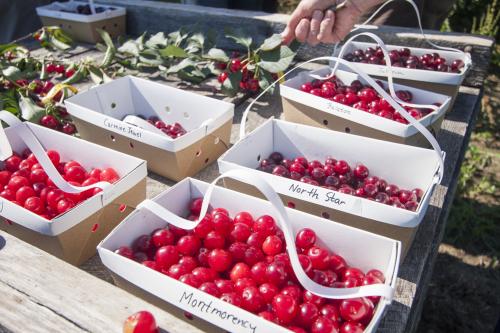 Iezzoni’s work was instrumental in releasing the popular Honeycrisp apple variety. Though it had appealing flavor, initially the fruits came in both red and green. Because the market at the time was not favorable to another green apple, RosBREED scientists were able to help producers breed the variety with a more marketable red skin.

“We wouldn’t have known how that worked before, and even if we did, we wouldn’t have been able to determine which plants would bear the undesirable phenotype before they fruited,” Iezzoni said.

The work has allowed producers to create new varieties more quickly and less expensively than ever before, but the work is not finished. In the next phase, the researchers plan to tackle even bigger issues facing Rosaceae.

The RosBREED team will target signifi fruit diseases such as fire blight, apple scab, powdery mildew, cherry leaf spot, bacterial spot, brown rot, Armillaria and blue mold, which together have caused producers to lose hundreds of thousands of trees and plants, as well as tons of fruit. By applying the genetic tools and knowledge developed over the past five years, the team will be able to reduce the crops’ vulnerability and keep producers’ livelihoods and the nation’s food system more secure.

“There are virtually no apple, peach or cherry cultivars that are resistant to major diseases because breeding for these traits has been very slow,” Iezzoni said. “Many times, we get disease resistance from cross-breeding with the plants’ wild relatives. But those bear small fruit, and it takes a long time to get them back to a desirable size. Now that we have a better understanding, we should be able to speed up disease resistance breeding considerably.”